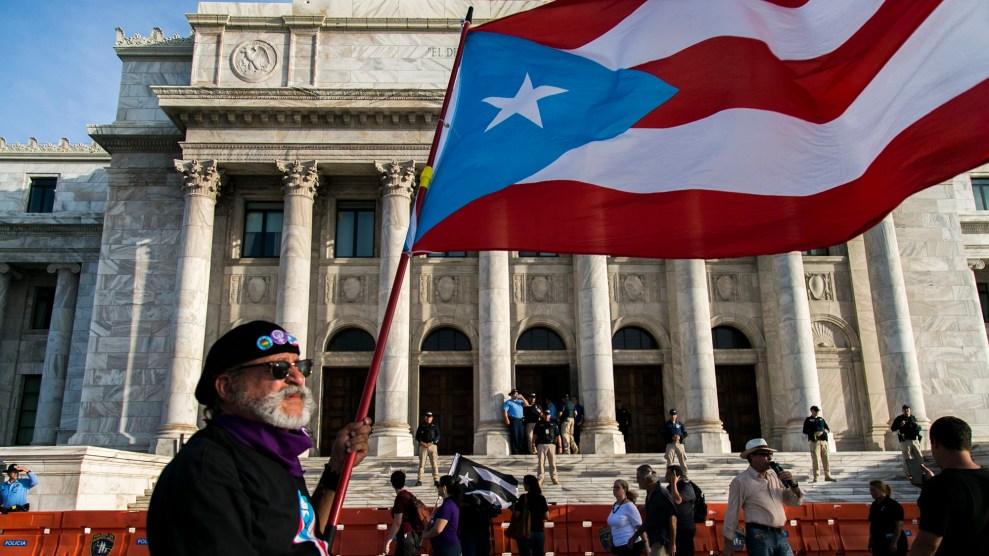 Hours before a dozen Democrats vying to be the next president of the United States took the debate stage in Ohio, the Supreme Court heard arguments in a key case involving Puerto Rico. At stake was the unelected fiscal control board set up by Congress in 2016 to oversee the island’s finances and find a way out from under $120 billion in debt. While the case was brought by a hedge fund that argued the board’s appointment was unconstitutional, the debate touched on some of the most important matters facing Puerto Rico, including how its colonial status shapes debt restructuring and the openly racist legal precedents shaping its law.

Ahead of the debate, the Power 4 Puerto Rico coalition launched a website aiming to hold 2020 Democratic candidates to account for their Puerto Rico policies—or lack thereof.

“Merely criticizing Trump will not cut it.”

“For too long, presidential candidates of both parties have ignored the light of the people of Puerto Rico,” Federico A. de Jesús, senior advisor to group said in a statement accompanying the site’s launch. “At a time when President Trump has targeted our community with insults and going as far as illegally withholding disaster relief funds duly approved by Congress, merely criticizing Trump will not cut it.”

Despite the coalition’s efforts, and the day’s arguments before the high court, Puerto Rico was once again neglected by the moderators, as it has been through all the 2020 debates.

The island has come up just a handful of times at the events, but only when candidates have gone out of their way to mention it. Julian Castro has done so twice, including during the first debate in June, in response to a question about climate mitigation, and again in July, when he hailed protesters who forced Puerto Rico’s governor from power. In the September debate, Andrew Yang criticized the federal reconstruction efforts on the island, and in last night’s debate, Sen. Elizabeth Warren mentioned a visit she made.

While the crowded Democratic debates have limited discussions on a host of subjects, leaving each candidate only a matter of minutes to try and connect with voters, the lack of focus on the island has prevented airing a number of issues critical to the nearly 3 million American citizens who live there, and their many relations elsewhere in the U.S. Along with yesterday’s Supreme Court hearing, and the persistent financial issues, Puerto Rico is the place where millions lived through one of the deadliest natural disasters in US history just two years ago, where local and national corruption recently spurred hundreds of thousands of people to take to the streets, and where, just hours before the debate, Gov. Wanda Vázquez called an emergency meeting in response to a mass shooting that left six people dead in an apartment complex, just one of a spate of recent brazen killings.

While Puerto Rico’s voters will participate in a late March Democratic primary, the bulk of delegates selected by voters to pick the party’s nominee will already have been selected. And Puerto Ricans can’t vote in the November 2020 presidential election unless they live on the mainland. It’s not hard to understand why the island’s issues can be pushed aside.

“On the day Puerto Rican advocacy groups called out Democratic candidates for their lack of interest in Puerto Rico, once again I am not surprised that the island gets ignored,” Julio Ricardo Varela, founder of Latino Rebels and co-host of the “In The Thick” political podcast, told Mother Jones. “It’s as if Democrats don’t really care to have an actual debate about colonialism, debt, austerity, and political status.”