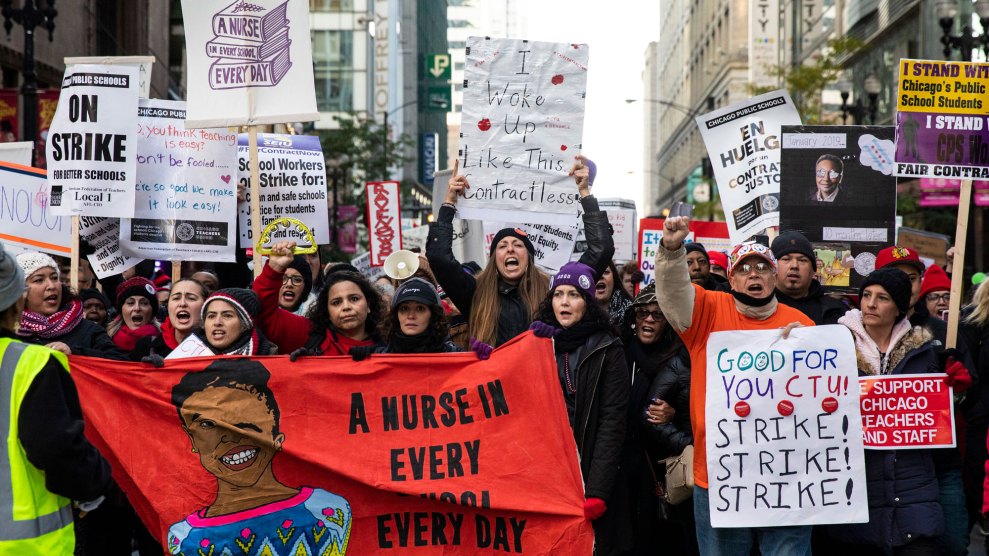 When Lauren first started as an elementary school counselor in Chicago’s South Side in 2012, she cried almost every day. On top of her responsibilities as a testing coordinator and case manager, Lauren listened to her students recount the daily traumas they faced—the acts of gun violence, the deaths of family members, the solitude of kids taking care of kids. She wondered what she had gotten herself into. “I was kind of like, I don’t know what I was thinking. I can’t handle this. It’s too much for one person to do.”

“It was definitely a learning experience,” Lauren told me. “You can’t really sit in a classroom and learn about how to run a grief group, like I did in my master’s program. You’re then sitting in front of six middle schoolers that have all lost siblings, cousins or uncles. It’s just completely different than you could imagine.”

On September 10, just a month after she’d started the job, her new colleagues went on strike for seven days, calling for pay raises and more support staffers and railing against controversial reforms pushed by then-Mayor Rahm Emanuel. They managed to secure an average 17 percent pay raise over four years, and altered Emanuel’s proposal to tie teacher evaluations to test scores. Lauren, who requested anonymity to speak frankly, says she could barely recall the details of that strike because, she says, she was focused on just getting through her first month at the elementary school.

What got her through the year was watching students improve after going through her anger coping group, and hearing from students themselves about what it’d meant to them. “That was the motivation I needed that first year to just get through and realize that maybe I can do this and it is what I’m meant to be doing,” Lauren says. “And it’s still something that drives me every day. Being a counselor is probably one of the most emotionally draining jobs.”

As she settled in, Lauren began to empathize with her colleagues who’d gone on strike. The 33-year-old from Potomac, Maryland was serving as the only counselor at a school of more than 230 preschool through eighth-graders; meanwhile, as she juggled multiple responsibilities beyond her counseling duties at her school, she heard of schools in the north side of the city with both full-time counselors and social workers. The situation felt untenable. Last year, a student had an asthma attack, and officials called an ambulance. The school nurse hadn’t been around that day—they come in once a week—so Lauren, who doesn’t have a medical background, grabbed the EpiPen from her office and was ready to jam it into him when the ambulance arrived. “A counselor should not be having to do that,” she told me. “We’re not trained for that.”

So when the Chicago Teachers Union announced a general strike this month, Lauren joined thousands of her peers to rally in the streets for better working conditions. At the heart of the strike, which entered its ninth day on Tuesday, is a call that felt familiar to Lauren, but also to teachers in cities throughout the country: Teachers want the school district to hire more counselors, nurses, and other support staff. That’s a particular concern in schools on the Chicago’s south and west sides, areas that have historically faced disinvestment.

Chicago Mayor Lightfoot is trying to blame @CTULocal1 for the strike dragging on. But the hundreds of students occupying City Hall think otherwise 😍pic.twitter.com/8YCvTuIpgy

“There’s so much inequality between the south and west side schools and the north side schools. And that’s all dependent on parent involvement, who people know, the communities, and it’s such an injustice,” Lauren says. “They can’t help what community they are born into and what school that they go to. It’s just not fair to not give them an equal playing field to other students in the same city.”

During the 2015-16 school year, the typical K-12 school counselor worked with, on average, 464 students, far above the American School Counselor Association’s recommended ratio of 250 students for every counselor. Lauren concedes that for an elementary school in Chicago, her caseload is small. She knows all of her kids by their first names, as well as their family members.

Still, “there’s not enough of me” at her school to match the emotional support needed for her students, Lauren says. “You have 250 students, but it’s 250 students with many needs,” she adds. “I don’t have enough time to just be a counselor and serve those students. I don’t have enough time in the day physically to see the students progress as much as I’d like to see them.” Her peers are even less fortunate. “Most of my colleagues have one student for 600, 700, 800 students,” she says.

Earlier this year, Lauren scheduled an anger support class with a group of third-graders when she received a call from a school security guard that a seventh-grader whose uncle died the night before had been “crying uncontrollably.” Lauren dropped her meeting with the third-graders to take care of the kid in an immediate crisis. “She needs to see you right now,” Lauren recalls hearing. She rushed and saw the girl in the hallway and brought her to her office. They spoke for nearly an hour at the end of the day.

But that came at a cost. The third-graders looked for their counselor and asked, “Where were you? We were waiting for group.” “I explained I had to run and meet with another student, but students don’t see it that way. They think, ‘Oh, you forgot.'”

“The most heartbreaking thing to me is to have students say, ‘You don’t have time for me,'” she told me. “That’s the hardest thing to hear, to have to explain to them, it’s not that I don’t want to see you but I have to get the mandated x, y, and z things done for the school. At the end of the day, one counselor per school is not enough to service the high needs that our students have.”

As a result, her students at times become her crisis reporters when their peers are struggling. Lauren recalled a time when a girl told her during lunchtime that a friend of hers contemplated suicide. “I don’t know what to do. Can you go talk to her?” Lauren recalls the girl saying. Lauren pulled the girl out of class to speak to her.

Before teachers went on strike more than a week ago, the seventh-grader whose relative died approached Lauren about her best friend, who had lost her older sister to gun violence earlier in the school year. The girls wanted to start a group session to share their experiences. “They’re like, ‘We’re both going through something so similar. No one else understands,'” Lauren says.

Since the strike, Lauren hasn’t been able to meet with them in person. The girls have spoken on the phone. “We’re passionate about [the strike] because we do want these things. It’s just a shame it has to come to this to get what these kids deserve because we want to be in the classroom. We want to be back at school,” Lauren says. She supports the strike but acknowledges that it’s difficult to see her students miss time inside the classroom. “And so it’s really hard when you hear a lot of negativity like ‘if they really wanted to be down for their kids, they would end the strike early and get back to work.’ But it doesn’t work like that, unfortunately.”

She sees it as a Catch 22: Her and her colleagues picket outside their schools every day for better opportunities for their students, but they see the repercussions their students face when they miss school. Her eighth graders missed their high school fair, an opportunity to meet with representatives from schools in the area. (In Chicago, teenagers have to not only graduate from high school but also show that, by the end of their time, they’ve either gotten a job or made into college, trade school, or the military.) “It’s hard to be outside of the school for this long knowing that our students are missing out,” Lauren says.