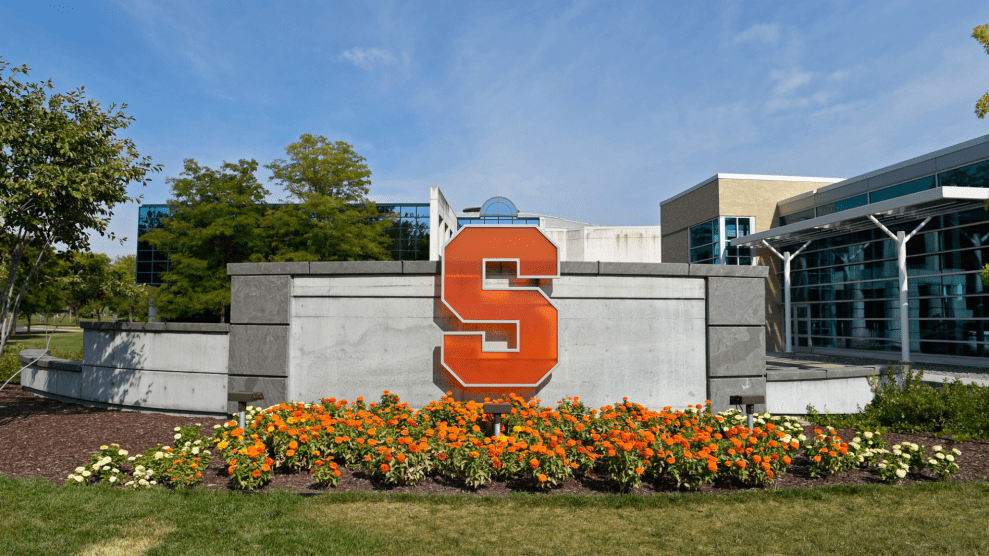 After nearly two weeks of escalating racist incidents on campus, Syracuse University held a community forum on Wednesday night in which University Chancellor Kent Syverud announced that four students were suspended for their involvement in a verbal assault of a black female student on Saturday. Syverud said that these students did not act alone and were joined in by a large number of students from other universities. The verbal assault has also been referred to the district attorney’s office.

“We just cannot let our students of color, our Jewish students, our Asian students, or any of our students, or faculty and staff, be afraid on this campus because of who they are,” Syverud said, according to CNN.  The chancellor, who is white, became emotional when discussing his experience raising a mixed-race family in the south.

Saturday’s incident is just the most recent development in a string of racial attacks on ethnic and religious minority students at Syracuse, which began on November 7. The first incident took place at a student dormitory, where residents discovered racist graffiti aimed at Black and Asian students on multiple floors in the building. Racist graffiti directed towards Asian students was later discovered in the bathroom of a physics building, and then again the following day in the student dormitory where the original markings were found. A university official also confirmed to NBC that a faculty member received anti-Semitic threats. In total, Syverud says that there were 12 cases of racist and anti-Semitic graffiti found on campus.

Kayleigh Weil, a junior at Syracuse University, told the student newspaper, the Daily Orange, about her discomfort in leaving her home on Tuesday. “The string of incidents that have gone essentially unpunished and seemingly unrecognized by the university has just made me feel extremely unsafe,” said Weil.

At least one incident, in which some students reported to have been air dropped a white supremacist manifesto, is believed to be a hoax according to Syverud. However, the incident is still under police investigation.

The university agreed to 16 of the 19 terms laid out by minority and international groups on campus in writing Tuesday afternoon, which included mandatory diversity training for faculty, and a clarification of the school’s current anti-harassment policy. However, according to CNN, many students alleged that the school had not gone far enough to keep them safe. A number of students walked out of the forum when Syverud said he could not sign their full list of demands.

“I’m sorry I misunderstood why the signature was so important,” said Syverud, adding that he thinks “we are close to a significant agreement on this campus.” According to the Daily Orange, many students have left campus early for Thanksgiving break over safety concerns.