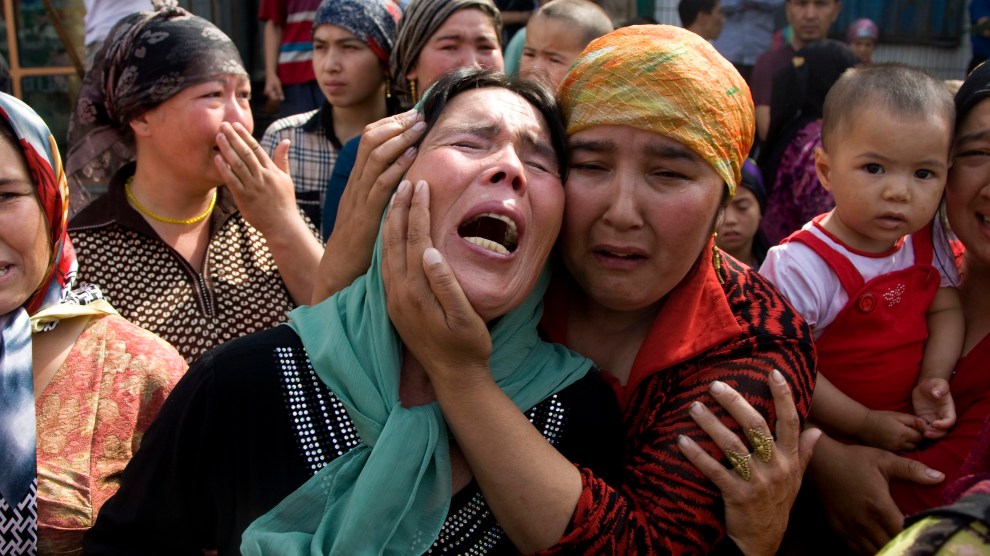 Uighur women grieving for their men who they claim were taken away by the Chinese authorities in Urumqi, China, in 2009. Ng Han Guan/AP

In one of the biggest leaks from China’s Community Party in decades, reporters at the New York Times have gotten their hands on hundreds of pages of documents and secret speeches by President Xi Jinping that expose the inner workings of a brutal crackdown on Muslims in the country.

The more than 400 pages of papers shed light on a huge network of detention camps that have imprisoned as many as a million ethnic Uighurs, Kazakhs, and other Muslims over the past three years in Xinjiang Province, a resource-rich area near Pakistan and Afghanistan, as part of a decadeslong attempt by Beijing to stop Uighur resistance to Chinese rule. While Chinese officials have downplayed international criticism by claiming the camps offer benefits like job training to Muslims, the leaked documents show that, in private, they used chilling justifications for the detention—describing Islamic radicalism as a “virus” that needed to be “eradicated.” In the camps, people are put through months or years of indoctrination with the hopes of making them supporters of the Communist Party in Beijing.

Some of the most revealing documents are directives to local officials about how to calm down students who returned home from university to find that their family members had disappeared to the camps. The officials were instructed to tell the students that their loved ones had been “infected” by the “virus” of radicalism and needed to be isolated for treatment. “Treasure this chance for free education that the party and government has provided to thoroughly eradicate erroneous thinking, and also learn Chinese and job skills,” they were told to say. “This offers a great foundation for a happy life for your family.”

Also among the documents are speeches made by Xi in 2014, shortly after Uighur militants attacked a train station, killing 31 people. He encouraged party officials to mirror parts of the US “war on terror” after September 11. “Show absolutely no mercy,” he told them. He said he also worried that after American troops left Afghanistan, terrorist groups in that country would infiltrate China. (Xi’s speeches did not explicitly call for mass detentions, and in one of them he said he disagreed with the view that Islam as a whole should be “restricted or eradicated,” though he described Islamic extremism as toxic.)

According to the leaked documents, Chen Quanguo, who was appointed in 2016 to lead the Communist Party in Xinjiang, told local officials to “round up everyone who should be rounded up.” The massive arrests were all despite the fact that, as the Times reports, the overwhelming majority of Muslims in the province are not radical and follow moderate religious traditions. Though Uighur militants have attacked in the past, with riots in 2009 leaving nearly 200 people dead, their violence has never posed a serious risk to Communist control in Xinjiang, the Times notes.

Check out more chilling statements in the full investigation here.