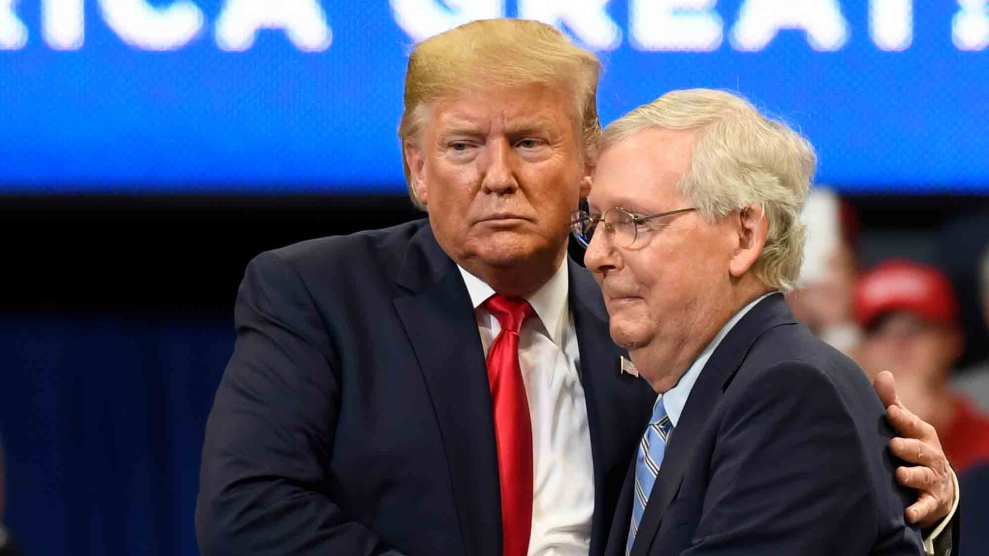 At the start of this week, Rep. Adam Schiff (D-Calif.), chair of the House Intelligence Committee, sent a letter to his colleagues in the House that provided a status report on the impeachment inquiry he has been overseeing. He noted that after weeks of investigation and public hearings, “We have uncovered a months-long effort in which President Trump again sought foreign interference in our elections for his personal and political benefit at the expense of our national interest.” And he informed his fellow House members that the committee was preparing a report that will be handed to the judiciary committee “soon after” Congress’ Thanksgiving recess—and that the judiciary committee will then proceed with the “next phase” of the impeachment inquiry. Schiff wrote, “This is an urgent matter that cannot wait if we are to protect the nation’s security and the integrity of our elections.” He added, “we will continue with our investigative work and do not foreclose the possibility of further depositions or hearings, we will not allow the President or others to drag this out for months on end in the courts.”

The message: Impeachment is on a fast track. That’s been House Speaker Nancy Pelosi’s strategy—stick to a narrow case for impeachment (the Ukrainian caper), don’t get bogged down in a lengthy and complicated investigation, demonstrate that House Democrats are not overly fixated on impeachment at the expense of other work, and don’t test the voting public’s patience. This certainly makes sense. Though public opinion polls show support for Trump’s impeachment at about 50 percent, Democratic strategists are convinced that a long, drawn-out process will turn the public against the Democrats. And the next election is just around the corner. The closer an impeachment trial in the Senate gets to Election Day, the more power there will be to the Republican argument that voters across the land should decide Trump’s fate, not a bunch of senators in Washington. So the Democratic plan appears to be to draw up and vote on—and presumably approve—articles of impeachment before Congress breaks for the holidays in mid-December.

There is a possible problem with this approach: Mitch McConnell. Once the House Democrats adopt those articles and kick impeachment over to the Senate for trial, they will lose control of the narrative. And then McConnell, the wily Republican leader in the Senate, and other GOPers in that body will be in charge of the story. Though Chief Justice John Roberts would preside over an impeachment trial, McConnell has a lot of leeway in setting some ground rules for that historic event. Imagine if Trump’s defense team wants to emulate the Republicans on the House Intelligence Committee and call Hunter Biden, the whistleblower, and others to the stand as part of Trump’s defense—to turn the trial into a circus or advance the phony cover stories, excuses, and distractions Trump and his allies have cooked up. The proceedings could turn into a free-for-all and provide Trump and the Republicans a platform for their various conspiracy theories. (Ukraine intervened in the 2016 election! Where are the Democratic servers?) Perhaps Roberts could keep the Republicans in line, but Senate rules do allow a majority to vote on questions of evidence and other matters. The rules state that the chief justice “may rule on all questions of evidence including, but not limited to, questions of relevancy, materiality, and redundancy of evidence and incidental questions, which ruling shall stand as the judgment of the Senate, unless some Member of the Senate shall ask that a formal vote be taken thereon, in which case it shall be submitted to the Senate for decision without debate.”

In other words, the Republicans could try to use the trial for their own purposes. And even if they don’t succeed in getting these and other witnesses to the stand, just having the fight will help them and Trump. During the recent hearings, Schiff was able to prevent Republicans from circusfying the sessions because he held the gavel. He rejected their requests for these sorts of witnesses. In the Senate, Roberts and McConnell’s majority, which is hostile to the impeachment process, will be in charge.

Then there’s Sen. Lindsey Graham, the South Carolina Republican who behaves like Trump’s Mini-Me. He has already announced he’ll conduct an investigation and hold hearings related to the activities of Joe and Hunter Biden in Ukraine. (There are no credible allegations they engaged in any wrongdoing.) Whether or not McConnell can turn the impeachment inquiry into a trial of the Bidens, Graham is aiming to do that on his own. Once the House passes articles of impeachment, the Senate Republicans could gain monopoly control of the Trump-Ukraine tale and use their power to morph a story of Trump wrongdoing into one of Democratic scheming and malfeasance.

Schiff has said his committee will continue to investigate the Ukrainian mess, and there’s plenty there. This episode isn’t as compact as the House Democrats first believed. Rudy Giuliani, Trump’s top henchman in this act of seeming extortion, is under investigation by federal prosecutors for a variety of potential misdeeds that may be related to his effort, on behalf of Trump, to pressure the Ukrainian government to produce both dirt on Joe Biden and information to support a debunked conspiracy theory that holds Russia did not hack the 2016 election. Two of Giuliani’s associates involved in this dirt-seeking mission—Lev Parnas and Igor Fruman—have been indicted for allegedly violating campaign finance law in the United States. They are charged with dumping large illegal donations into the bank accounts of a pro-Trump super PAC and the campaign of a Congress member who they enlisted in their effort to oust US ambassador to Ukraine Marie Yovanovitch. (Where did the money come from? That’s unknown.) Parnas, according to his lawyer, claims he helped set up a meeting between Rep. Devin Nunes (R-Calif.), the top Republican on the House Intelligence Committee, and a corrupt Ukrainian prosecutor who was part of multipronged scheme to boot Yovanovitch and disseminate negative information about the Bidens. (What was Nunes up to? He is now facing an ethics committee investigation.)

There appear to be ties between Giuliani’s muck-gathering in Ukraine and a Ukrainian oligarch named Dmytro Firtash, who’s fighting extradition to the United States after being indicted on bribery charges. (Were Giuliani and two Washington, DC, lawyers close to Trump who are representing Firtash for $300,000 a month—Joe diGenova and Victoria Toensing—endeavoring to spread anti-Biden material in return for receiving lenient treatment for Firtash from Bill Barr’s Justice Department?) The roles of White House chief of staff Mick Mulvaney, Secretary of State Mike Pompeo, former Secretary of Energy Rick Perry, and former National Security Adviser John Bolton in the Ukraine pressure scheme have not been fully detailed, with each of them refusing to testify before Congress.

The Trump-Ukraine scandal is deeper and wider than House Democrats first assumed. Should they ratchet back before finding answers to all these questions? Before using the courts to try to compel testimony from Bolton, Mulvaney, Pompeo, Perry, and maybe even Giuliani? (Giuliani is the president’s personal attorney, but attorney-client privilege may not cover all his actions.) Parnas says he wants to tell all to the intelligence committee—but presumably only if he is granted immunity. The bottom line: There’s still much to do to sort out all the dimensions of this scandal. The committee can continue to do so privately. But if the main show becomes the Senate trial—which will include whatever shenanigans the Republicans try to pull—the Democrats will have a tougher time conveying to the public a full account of Trump’s Ukraine scandal.

On Tuesday, during a background briefing with reporters, Mother Jones asked a Democratic staffer on the House Judiciary Committee, “Why rush?” Why not dig more into all the sinkholes that have opened up? Why not fight in the courts for the testimony of Bolton, Mulvaney, Pompeo, Perry, and others? (The House just won a first-round battle in its effort to force Don McGahn, Trump’s former White House counsel, to testify.) The staffer responded that Trump’s challenges to Congress’ oversight responsibility have been unprecedented and that the “wheels of justice turn but turn slowly.” If the House Dems slugged it out with the White House on these matters, he said, it’s not clear how long the fight might take. The other option, he indicated, was to proceed with the information they have unearthed and consider adding to the articles of impeachment the charge of obstructing Congress. Soon after the briefing, Rep. Jerrold Nadler (D-N.Y.), chair of the judiciary committee, announced that his committee will hold its first impeachment hearing on December 4 with a panel of constitutional scholars. In a letter to Trump, Nadler stated the hearing will “serve as an opportunity to discuss the historical and constitutional basis of impeachment.” He also asked if Trump and his lawyer would “attend the hearing or make a request to question the witness panel.”

In the House, it’s impeachment, full steam ahead. Perhaps there is little choice. Dwelling on impeachment could become a turnoff for some voters. Pushing an impeachment trial into the spring might provide Republicans the easy way out of declaring it’s too close to an election to consider this form of political capital punishment. But a narrowly cast impeachment case—as strong as it might be—could come across as thin, given all of Trump’s misdeeds, and as possibly premature, given all the elements of the Trump-Ukraine scandal that have not yet been probed and explained. And there’s little doubt the Republicans, once they’re in the driver’s seat, will do all they can to steer a course away from the truth and toward the bizarro world of Trumpian hogwash. Placing impeachment in the ten-items-or-less line may have certain advantages. But they don’t come without serious risks.