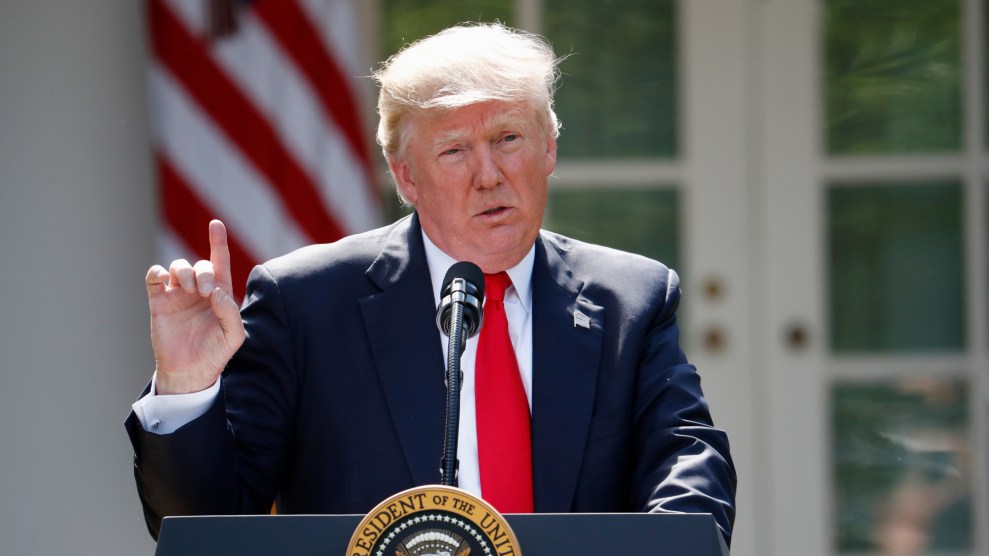 Trump first announced that the U.S. would be withdrawing from the Paris agreement in June 2017.Pablo Martinez Monsivais/AP

The Trump administration on Monday began the formal process of withdrawing the United States from the Paris agreement, the historic global deal to cut climate-changing emissions.

Secretary of State Mike Pompeo announced the move in a post to Twitter, saying “the U.S. is proud of our record as a world leader in reducing all emissions, fostering resilience, growing our economy, and ensuring energy for our citizens.” U.S. carbon emissions rose sharply in 2018 ― a spike that the administration has largely ignored but which Environmental Protection Agency chief Andrew Wheeler attributed to “an uptick in manufacturing and industrial output” triggered by President Donald Trump’s policies.

Today we begin the formal process of withdrawing from the Paris Agreement. The U.S. is proud of our record as a world leader in reducing all emissions, fostering resilience, growing our economy, and ensuring energy for our citizens. Ours is a realistic and pragmatic model.

Nov. 4 ― exactly three years since the agreement took effect ― marked the first day any country became eligible to start the paperwork needed to pull out of the pact. That includes the United States. With its letter to the United Nations on Monday, the United States kicked off a the yearlong process of formally exiting the pact. The withdrawal would officially go into effect on Nov. 4, 2020, the day after the presidential election.

The decision was widely expected. On June 1, 2017, President Donald Trump stood in the White House Rose Garden and told the world the United States would exit the Paris climate deal. The administration has treated it as a foregone conclusion ever since as regulators gutted regulations to curb climate-changing emissions and promoted fracked gas and coal across the globe.

The Trump administration has spent its first three years dismissing the findings of its own scientists in its push to boost domestic fossil fuel production.

“I withdrew the United States from the terrible, one-sided Paris climate accord,” Trump said at a gas conference last month. “It was a total disaster for our country.”

The Trump administration has spent its first three years dismissing the findings of its own scientists in its push to boost domestic fossil fuel production. The president has cultivated allies in far-right leaders such a Brazilian President Jair Bolsonaro, who accuses climate scientists of standing in the way of his plans to industrialize the Amazon rainforest.

Meanwhile, scientific warnings have only grown more dire, and public understanding of the threat of climate catastrophe has increased. Polls now show the issue now tops concerns for Democratic and independent voters, as well as sizable numbers of Republicans.

Alden Meyer, director of strategy and policy at the nonprofit Union of Concerned Scientists, said in a statement that Monday’s decision is “irresponsible” and puts industry profits over public health.

“All too many people are already experiencing the costly and harmful impacts of climate change in the form of rising seas, more intense hurricanes and wildfires, and record-breaking temperatures,” he said. “The Paris agreement is our best hope to mount an effective global response to the climate crisis, which is why it has resounding support from a majority of Americans.”

Formally withdrawing from the Paris agreement threatens to make the climate crisis an even more partisan issue going into the 2020 election.

Formally withdrawing from the Paris agreement threatens to make the climate crisis an even more partisan issue going into the 2020 election. Nearly every Democrat in the field has released sweeping climate proposals, many of them based on the Green New Deal framework progressives are now championing.

But the move also casts one of the Obama administration’s signature foreign policy achievements in an unfavorable light. The Paris agreement aims to keep the planet’s average temperature from rising more than 2 degrees Celsius above preindustrial levels, though it encourages countries to pursue a more ambitious target of 1.5 C. A United Nations report last year found that even warming of 1.5 C, or 2.5 degrees Fahrenheit, is likely to destroy $54 trillion worth of property and kill millions.

The options for poorer countries whose combined emissions could determine how much hotter the world becomes in the next century are slimmer, too. Former President Barack Obama only pledged $3 billion as part of the pact to help poorer countries avoid building polluting infrastructure. After contributing just $1 billion, Trump canceled future payments.