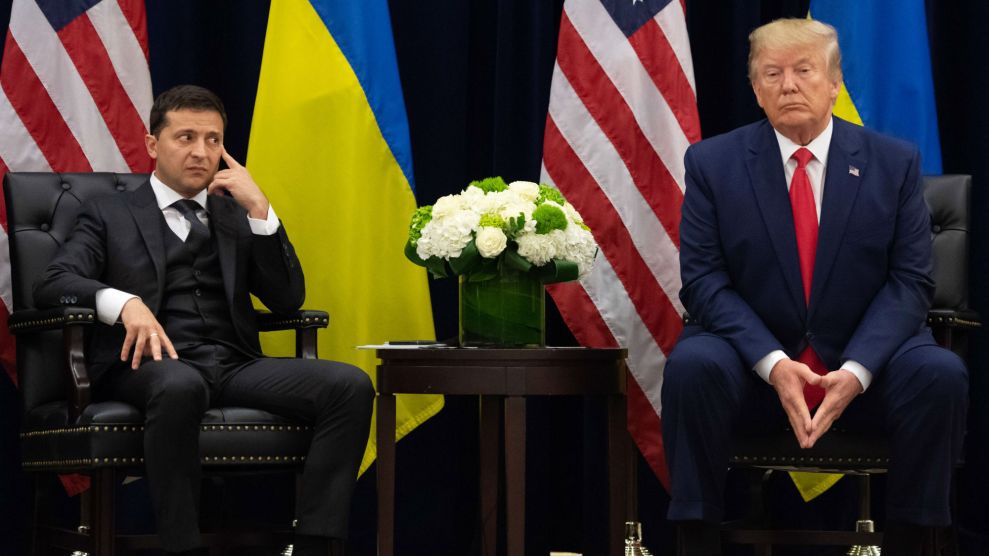 President Volodymyr Zelensky looks on during a meeting in New York on September 25 on the sidelines of the United Nations General Assembly.Saul Loeb AFP via Getty Images

A 300-page impeachment report released on Tuesday by House Democrats describes how President Donald Trump used “the powers of his office to solicit foreign interference on his behalf in the 2020 election”—but it also suggests that the plot pursued by Trump and his allies in Ukraine was broader than investigators have so far revealed.

The report indicates that Rep. Devin Nunes (R-Calif.) was in close contact with Rudy Giuliani, Trump’s personal lawyer, and Giuliani’s since-indicted associate Lev Parnas as they engaged in an effort to smear former US Ambassador to Ukraine Marie Yovanovitch, whom Trump removed from her post a few months later. The Democratic document cites records of Giuliani’s calls, obtained from AT&T, which detail extensive communications in early April between Nunes, Giuliani, Parnas, and John Solomon, then an opinion writer for the Hill newspaper whose columns Giuliani used to push his agenda. This revelation raised questions about Nunes’ failure to recuse himself from hearings on the Ukraine scandal.

But the call records, while suggestive, do not make clear exactly what Nunes’ role in the plot was. In a press conference on Tuesday, House Intelligence Committee Chairman Adam Schiff (D-Calif.) said it “is deeply concerning that at a time when the president of the United States was using the power of his office to dig up dirt on a political rival that there may be evidence that there were members of Congress complicit in that activity.” But Schiff said that impeachment investigators are focused on Trump, leaving Nunes’ actions for others to tackle. That might suggest a House Ethics Committee probe into Nunes’ actions.

The report also details Giuliani’s phone calls this spring and summer with both the White House and a number at the Office of Management and Budget. These calls suggest Giuliani kept in touch with Trump and Mick Mulvaney, the White House acting chief of staff who also heads OMB, about pressuring Ukraine to announce investigations aimed at helping Trump’s reelection chances in 2020. The call log includes a 13-minute call on August 8 between Giuliani and the OMB number. Mulvaney has publicly admitted that the White House conditioned release of the aid on Ukraine announcing political investigations. But the phone records may undercut a Republican effort to argue that Giuliani carried out the scheme to extort Ukraine without approval of Trump and his top aides.

The report also contains revelations about Joe diGenova and Victoria Toensing, a husband-and-wife legal team who assisted Giuliani’s search for dirt in Ukraine. Toensing and diGenova, Fox News fixtures who last year agreed to join Trump’s legal team but quickly stepped aside due to conflicts with other clients, represent Dmitry Firtash, a Ukrainian oligarch. Firtash, who is fighting extradition to the United States on bribery-related charges, recently told the New York Times that the duo offered to help him with his Justice Department case while pressing him to help provide negative information on Biden.

But the Democratic report says that Toensing and diGenova also inked retainer agreements last April with three other Ukrainians: Viktor Shokin, Yuriy Lutsenko and Kostiantyn Kulyk. Shokin is the allegedly corrupt former prosecutor whose firing in 2016 came after pressure from Biden and European officials. (Shokin later claimed his ouster was related to Biden’s son Hunter sitting on the board of a Ukrainian gas company that Shokin was threatening to investigate, a debunked claim Trump repeatedly pushed.) Lutsenko and Kulyk, who were also senior Ukrainian prosecutors suspected of corruption, likewise pushed allegations that Trump’s backers wanted Ukraine to investigate.

Toensing and diGenova’s firm, the report states, “agreed to represent Mr. Lutsenko and Mr. Kulyk in meetings with U.S. officials regarding alleged ‘evidence’ of Ukrainian interference in the 2016 U.S. elections, and to represent Mr. Shokin ‘for the purpose of collecting evidence regarding his March 2016 firing as Prosecutor General of Ukraine and the role of Vice President Biden in such firing, and presenting such evidence to U.S. and foreign authorities.'”

Lutsenko agreed to pay Toensing and diGenova $25,000 per month for four months, the report says. (Giuliani also considered representing Lutsenko, a service for which he hoped to be paid at least $200,000, according to reports last week.) These agreements indicate that Toensing and diGenova, while coordinating with Giuliani, hoped to be paid by Ukrainian government officials to influence the United States government on their behalf. The lawyers have not registered with the Justice Department as foreign agents, though the Foreign Agents Registration Act generally requires that step for anyone who promotes the interests of foreign clients in the United States.

Mark Corallo, a spokesman for Toensing and diGenova, said in an email that the committee is citing draft agreements. “The agreements were never executed,” Corallo wrote. “There were no representations. No business was transacted. Last I heard, individuals are not required to register for non-existent business.”

The report states that the retainer agreement were unexecuted but says that a spokesman for Toensing and diGenova’s firm confirmed to the committee “that the firm represented Mr. Lutsenko” and also “acknowledged that the firm represented other ‘Ukrainian whistleblowers.'” Corallo said that spokesman was him but that the committee got the facts wrong. “Sloppy staff work,” he wrote.

“I never said they represented Lutsenko.” he added. “They discussed representing him but never did.”

House Democrats are moving toward impeaching Trump despite many unanswered questions about the activities of Trump’s associates in Ukraine. Democrats say they have sufficient evidence on Trump’s misconduct to move ahead and have reason to act fast. “We do know without any doubt that the President of the United States solicited foreign interference in our election, abused the power of his office…to get his political dirty work done,” Schiff said at Tuesday’s press conference. “The only question is, how much more extensive was the scheme, how many others may have been involved, and what was the full knowledge and participation of other parties? And while we will get the answers to those questions…we do not intend to delay when the integrity of the next election is still at risk.”