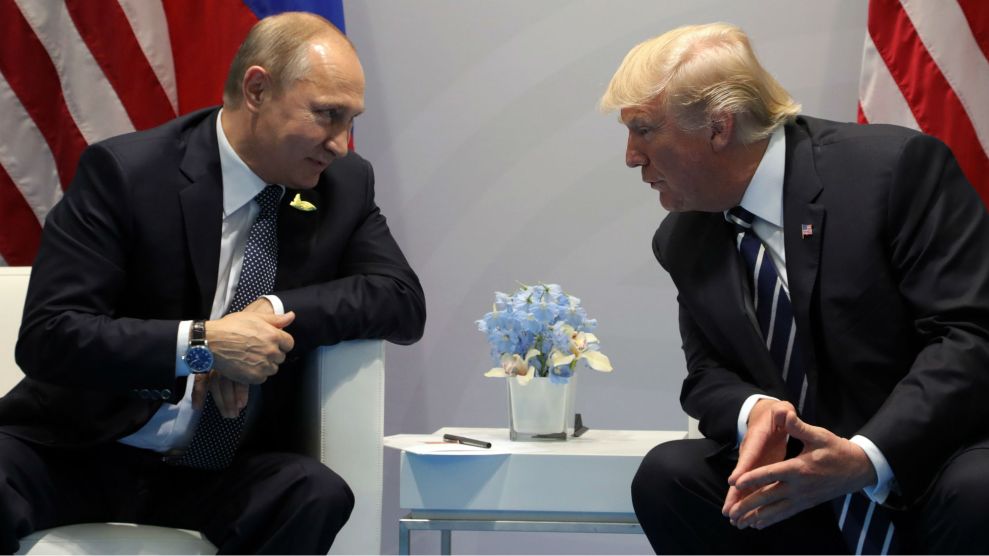 Russia's President Vladimir Putin and President Donald Trump during a bilateral meeting at the G20 summit in Hamburg.ASS/Zuma

You can’t make it up. President Donald Trump on Friday night touted a statement from Russian President Vladimir Putin criticizing Trump’s impeachment. Trump did this amid continuing revelations that Putin helped sell him on the discredited theory that Ukraine, not Russia, interfered in the 2016 presidential election.

The House impeached Trump on Wednesday night for abuse of power and obstruction of justice. Lawmakers concluded that Trump had betrayed his office by barring military aid to Ukraine and denying Ukrainian President Volodymyr Zelensky a White House meeting until Zelensky announced investigations into former Vice President Joe Biden and Trump’s bizarre idea that Ukraine has a server from the Democratic National Committee that contains evidence related to who interfered in the 2016 election.

This second claim relates to Trump’s refusal to accept the US intelligence community’s unanimous conclusion that Russia interfered in the 2016 election to help him. Instead, the president has bought into the idea that Ukraine, formerly part of the Soviet Union and now Russia’s enemy, actually intervened to help Hillary Clinton. And Russia itself has been selling the conspiracy. That’s the conclusion US intelligence officials have arrived at, and the one expressed by several State Department officials during the impeachment hearings.

And new revelations suggest that Trump may have been directly influenced by Putin. The Washington Post reported Thursday that, after meeting privately with the Russian president in July 2017 at the Group of 20 summit in Hamburg, “Trump grew more insistent that Ukraine worked to defeat him.” Trump’s refusal to accept that Russia interfered in 2016 and insistence on instead blaming Ukraine led advisers to believe Putin himself planted the idea of Ukraine’s culpability in Trump’s head, the report says. One former senior White House official told the Post that Trump once said Ukraine was the real culprit because “Putin told me.”

Putin on Thursday used talking points similar to Trump’s own in discussing the US president’s impeachment. “It’s simply a continuation of internal political struggle,” Putin said at an end-of-year news conference in Moscow. “The party that lost the (2016) election, the Democratic Party, is trying to achieve results by other means.”

The president has not responded to the Post‘s report. But by touting Putin’s words, Trump did nothing to dispute the notion Putin has influenced him.