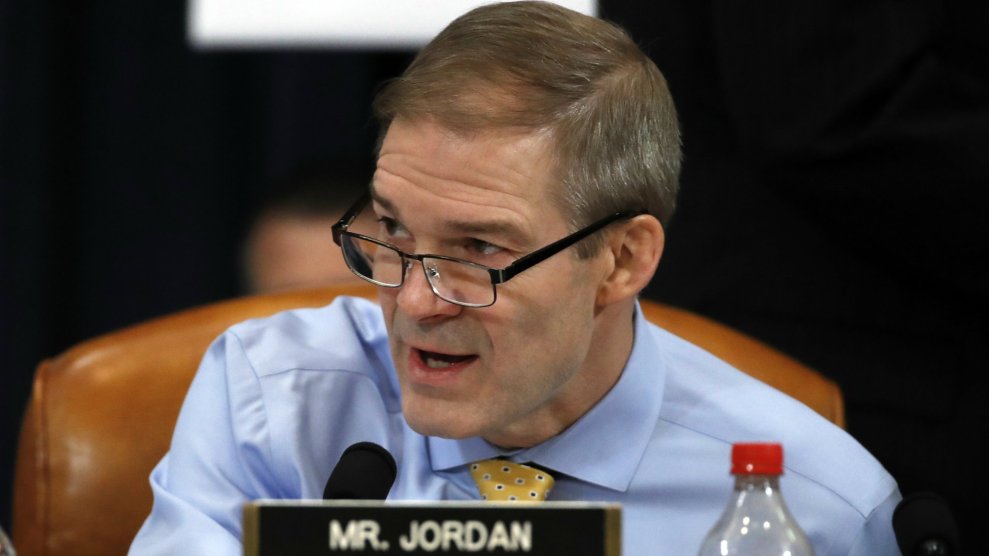 Last week, Rep. Jim Jordan (R-Ohio) sent an alarming email to his supporters. Jordan, who is one of Donald Trump’s most vocal defenders on Capitol Hill, warned that Obama-era Attorney General Eric Holder is on the cusp of using the courts to “steal” his congressional seat and replace him with a “radical liberal.” He asked readers for “$25 or more” to “fight this liberal scheme.”

“Since Obama left office…Holder has been focusing his energy on the National Democratic Redistricting Committee (NDRC), a liberal group whose goal is to steal Conservative seats in Congress, not at the ballot box, but in the courts,” Jordan’s January 1 email read. “And now his sights are set on me!! Recently, three judges struck down Ohio’s Congressional map, stating that all Ohio Congressional districts must be redrawn before next year, including mine!”

The legal battle Jordan was describing—a challenge to Ohio’s heavily gerrymandered congressional map—really did happen. But it ended months ago after the Supreme Court’s controversial ruling that the judiciary could not intervene in such cases. The Ohio map will remain in place. Jordan omitted that fact entirely from his fundraising pitch.

“Rep. Jordan’s claim that Ohio’s congressional districts must be redrawn before next year is incorrect,” says Corey Goldstone, spokesperson for the Campaign Legal Center, a nonpartisan watchdog organization.

Here’s the backstory: In May 2018, the ACLU of Ohio filed a federal lawsuit alleging that Ohio’s congressional maps amounted to unconstitutional partisan gerrymandering. A year later, in May 2019, a three-judge panel for the Southern District of Ohio ruled that the state’s districts had indeed been gerrymandered to favor Republicans, whose majority status in state government means that they control the redistricting process. The judges set a June 14 deadline for the state to redraw the lines.

But the voting-rights victory was short-lived. Ohio Attorney General Dave Yost, a Republican, appealed the case to the Supreme Court, which had recently heard similar arguments in gerrymandering cases from Maryland and North Carolina. In June, the Supreme Court delivered a 5-4 ruling in the Maryland and North Carolina cases, declaring that partisan gerrymandering cannot be challenged in federal court. That decision would reverberate in similar legal fights across the country, including Ohio. In October, the Supreme Court formally tossed out the challenge to Ohio’s Republican-drawn map. Thanks to that ruling, Ohio’s congressional map will not be redrawn until the census results are released prior to the 2022 election cycle—and the state’s Republicans will once again have the ability to shape districts that give them a substantial advantage.

For many Democrats and voting rights advocates, the Supreme Court ruling was a huge blow in the fight to redraw districts around the nation that had been created to stack the deck in favor of one party, usually Republicans. Here’s what Mother Jones’ Ari Berman and Pema Levy wrote when that decision came out:

Though both parties have done their fair share of gerrymandering, Republicans did it in far more places over the past decade. In 2010, Republicans took control of nearly every major swing state and oversaw the redistricting process for four times as many state legislative seats as Democrats, giving them a virtual lock on power for the remainder of the decade. Republicans were able to hold onto an additional 16 congressional seats and seven state legislative chambers in 2018 because of these skewed maps, according to an Associated Press analysis.

In Ohio, Republicans received 52 percent of the vote in the 2018 congressional elections but won 75 percent of the state’s 16 congressional seats, thanks to the gerrymandered map. Jordan, who touts himself as being “one of the most conservative members of Congress,” won the sprawling 4th district—which is often pointed to as one of the state’s most gerrymandered—by more than 30 points.

But one would never know that from Jordan’s fundraising email. “The Democrats are leaping with joy, because with a stroke of the pen they could flip critical seats in Congress and maintain Nancy Pelosi’s majority!!” it says, before asking supporters to “make a generous donation of at least $25 today to help fight back.”

“Beyond the questionable claims made in Rep. Jordan’s fundraising email, he seems dismissive of the obvious conflict of interest presented by politicians redrawing district maps more generally,” Goldstone notes. To curb partisan gerrymandering, there have been increasing calls for states to adopt independent redistricting commissions, a reform that Holder’s NDRC has supported.

Jordan’s campaign didn’t respond to a request for comment, but he’s clearly not a fan of independent commissions. “Holder and the Democrats know they can’t win in a fair fight,” he wrote in the fundraising email, “that’s why having unelected and unaccountable commissions potentially drawing the congressional lines excites them so much.”

Goldstone disagrees. “Gerrymandering is a serious problem facing our democracy,” he says. “Independent redistricting commissions are a reform supported by 60 percent of Democrats, Independents and Republicans.”