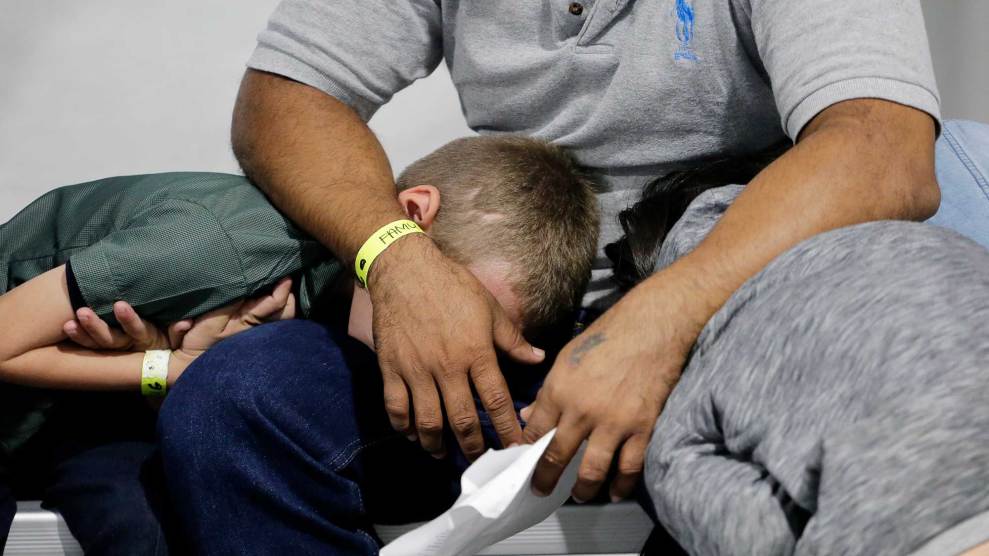 Migrants applying for asylum in the United States wait in a holding area at a new tent courtroom in Laredo, Texas. Eric Gay/AP

Homeland Security officials sent a seven-year-old asylum seeker and victim of sexual assault back to Mexico because she failed a fear screening interview that took place over the phone. A Cuban migrant was abducted from a taxi while attempting to buy food in a border town.

These and other harrowing stories are detailed in a damning new report released Wednesday by the nonprofit Human Rights First, summarizing the impacts of the Trump administration’s Migrant Protection Protocols policy, more commonly known as “Remain in Mexico.” The policy, first announced in January 2019, requires asylum seekers who arrive at the southern border to await their case proceedings in Mexico, instead of remaining in the US as was previously allowed. Now, one year into MPP, the Human Rights First report tallies the human toll:

Thousands of asylum seekers have been sent back to Mexico to await their asylum hearings.

Under MPP, more than 57,000 people have been returned to Mexico to await court proceedings on their asylum claims. Nearly half have ended up in notoriously dangerous border towns such as Nuevo Laredo. Some have had to travel through the similarly treacherous region of Sonora, Mexico, in order to appear at immigration court.

Once there, migrants are met with the near-constant threat of rape, kidnapping, and torture.

Human Rights First reports at least 816 incidences of murder, torture, rape, and kidnapping of asylum seekers sent back across the border by DHS officials. They cite a US Immigration Policy Center study that found that 1 in 4 returned asylum seekers in Tijuana and Mexicali had been threatened with violence. These migrants are actively targeted by drug cartels for kidnapping and assault as they seek food and work in Mexico, and in transit to and from US immigration court.

Children and other vulnerable populations are among those being sent back under MPP.

The report identified some 16,000 children among MPP returnees, and reported at least 201 cases of kidnappings or attempted kidnappings of children. Other vulnerable people returned include:

…children with cancer, autism, Cerebral Palsy, and brain seizures, adults with limited mental capacity, seizure disorders, and at least two deaf, nonverbal individuals, many pregnant women and LGBTQ persons, as well as dozens of Mexican nationals and at least one unaccompanied child who are not even eligible for MPP.

Once across the border, it’s nearly impossible for asylum-seekers to win refugee protection.

As of November 2019, 96 percent of people returned to Mexico by MPP did not have lawyers, according to court data cited in the report. It also found that of more than 24,000 completed MPP asylum cases, only 117, or 0.5 percent, received protection.

On January 14, Democrats on the House Judiciary Committee sent a letter to acting DHS Secretary Chad Wolf questioning the legality of MPP and requesting more information about its implementation. They gave Wolf until the end of the month to respond and intend to conduct what they call a “comprehensive review of the policy.”