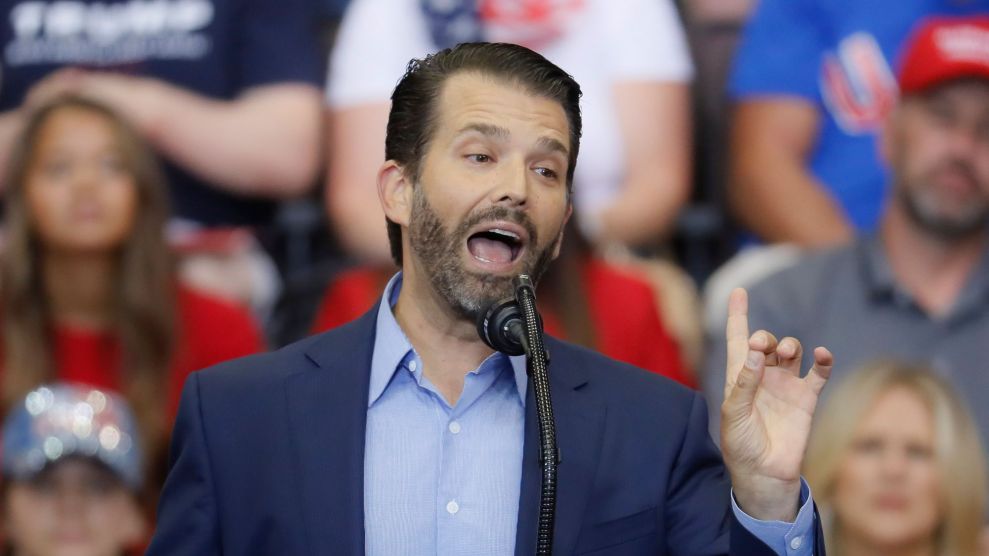 Mother Jones’ David Corn was eating breakfast on the campaign trail in Manchester, New Hampshire, Tuesday morning when Donald Trump Jr. walked into the diner. Corn took the opportunity to ask the president’s son about the infamous June 2016 Trump tower meeting, when Trump Jr., Paul Manafort, and Jared Kushner met with a Russian lawyer in an effort to obtain incriminating information about Hillary Clinton from the Russian government. In an email arranging the meeting, Trump Jr. had been told that this was “obviously very high level and sensitive information but is part of Russia and its government’s support for Mr. Trump.”

Why, Corn asked Trump Jr., had he agreed to meet with the Russian emissary?

At the Chez Vachon diner in Manchester, I asked ⁦⁦@DonaldJTrumpJr⁩ why he thought it was appropriate to meet with a Russian emissary who he was told was part of a secret Kremlin effort to help ⁦@realDonaldTrump⁩’s campaign. Here’s what happened. pic.twitter.com/S0du1Z0IJy

“We’ve spoken about this a thousand times,” Trump Jr. responded. “I’ve testified about it, unlike Hunter Biden.”

When Corn pressed further, Trump Jr. added that he is “always happy to hear [what’s on] people’s minds. I’m allowed to have a conversation with people, aren’t I?”

“Of course you could do it,” Corn responded. “I’m asking why you thought it was appropriate to do it. Because you were told it was part of a Russian government effort to help the campaign.”

“No, he wasn’t told that,” replied Kimberly Guilfoyle, who is a Trump campaign adviser and Trump Jr.’s girlfriend.

In this exchange, @kimguilfoyle says that @DonaldJTrumpJr *was not* told the Russian emissary was part of a Russian government effort to help the Trump campaign in 2016. Well…that’s a lie. Here’s the email Trump Jr. received. Now why would they lie about this? pic.twitter.com/Y5gMs0UOa2