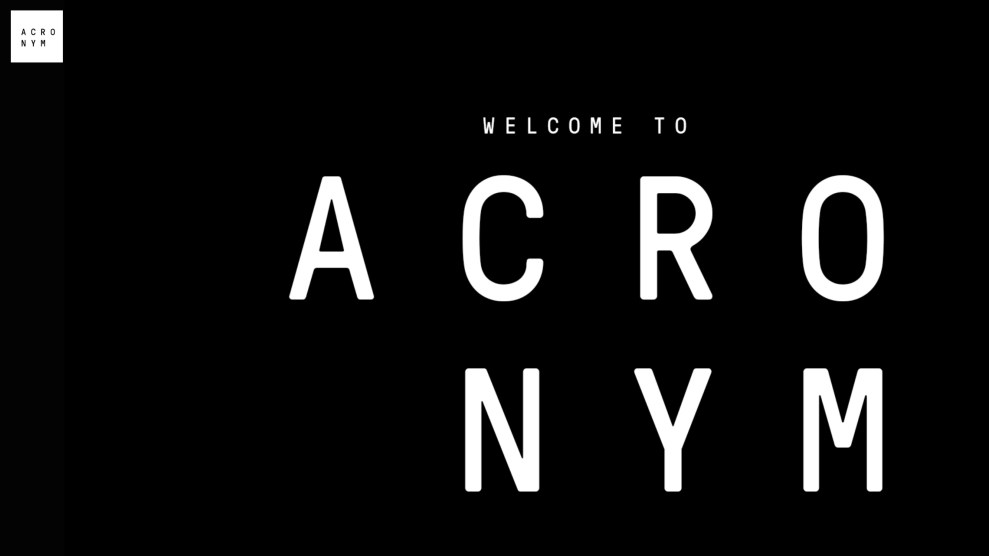 The letter was sent to prospective investors not long ago, the prose so redolent of disruptomatic DC consultant patter that lanyards practically hang from every word. “We don’t do hyperbole,” it reads. “We call BS. We say when our programs work. We say when they don’t because being dishonest or evasive tells us you have something to hide.”

It goes on a little later: “Just don’t measure our success by how many Politico articles we’re mentioned in. You’ll be disappointed.”

The letter, obtained by Mother Jones, was likely sent in 2018 on behalf of a nonprofit called Acronym, which today is infamous for having launched the tech company that launched the app that launched the Iowa Democratic caucuses into a days-long spectacle of incompetence. In the days since the caucuses went sideways in part because of its undertested app, Acronym has been evasive, if not dishonest. It has been mentioned in at least a dozen Politico articles, and indeed no one has taken the media attention as a measure of Acronym’s success.

So what is Acronym? It’s a lot of things, but in public it bills itself as “a nonprofit organization committed to building power and digital infrastructure for the progressive movement.” Its CEO is a well-connected political operative, Tara McGowan, and at the time the letter was written it had a “team of 15 (100 percent millennial, 90 percent women) strategists, data nerds, creatives, Facebook ninjas and organizers.” Acronym, founded in 2017, has a PAC and a digital strategy firm, Lockwood Strategy, and of course it has the political technology company, called Shadow, which is staffed by former Clinton staffers and some developers who had just completed coding boot camp a few months ago.

Acronym swears that Shadow is an independent company, but that seems a little dubious, given that Acronym is the sole investor in Shadow and shares a WeWork space with the company, that Shadow’s founder previously worked at Acronym, and that Acronym at one point scrubbed mentions from its website of having launched Shadow (the references were later restored).

The company declined to comment on the record about the letter, which is transcribed at the bottom of the page. Check out the whole thing to get a full taste of its swaggering tautologies and nothingburgers. Bolded headers like “WHAT COMES NEXT” and “WHAT DOES THAT MEAN” help guide even the most inept rich person through the thickets of startup ideation. It’s as if Axios had been commissioned to write a business prospectus.

Here are couple of our favorite bits:

We invest in digital-first tools and tactics that reach voters where they spend their time – online + on their phones with creative content that catches their attention and inspires them to act. Like pierogis that people want to eat with their friends after the polls.

There was apparently a link beneath that last sentence but it’s gone dead in the version of the letter we’ve obtained. We’ll just have to imagine whatever tableau we were meant to see of bright young people eating pierogis after doing the hard work of punching some names into a voting booth. Pierogis are one way to reach voters. Another way is to improve the material conditions of their lives by way of political candidates who do not treat voters as an undifferentiated mass of white yuppies.

We don’t duplicate efforts. We identify gaps, then we fill them. We understand the power of coordination and we encourage and facilitate it where we can to maximize limited resources and impact.

Read that again. Yes, that’s right. It doesn’t mean anything. You identify problems and fix them? Impressive!! You work with other people to fix problems efficiently? Even more impressive! This is a lot of words to just say “we’ll do a good job.”

Here’s the full thing. We retyped the letter at the request of our source.

ACRONYM was incorporated in the wake of the 2016 presidential election, but the idea of ACRONYM as a solution to problems that have persisted within the Democratic party long before Donald Trump was elected President was manifested many months before.

Tara McGowan, a political strategist who helped build and run three of the largest digital programs and teams in the progressive movement over the past six years, witnessed firsthand how a broken campaign model and the veteral strategists who continued to subsidize it were holding the Democratic Party back from investing in the tools and tactics needed to win campaigns in a digital age. 2016 wasn’t the first election Democrats lost because of an obvious miscalculation around how people and technology evolved, but ACRONYM exists to ensure it will be one of the last.

ACRONYM is a progressive organization that is building the digital infrastructure the Democratic party has failed to invest in – but desperately needs – in order to build lasting political power at every level of government.

BUT WHAT DOES THAT MEAN?

For starters, it’s important to remember that “digital” is an adjective, not a noun, and when you understand that, you’re closer to understanding ACRONYM and the programs and resources we deploy.

WHAT HAVE YOU ACTUALLY ACCOMPLISHED?

Since our inception in March 2017, our incredible team of 15 (100 percent millennial, 90 percent women) strategists, data nerds, creatives, Facebook ninjas and organizers has:

— Raised over $8 million to fuel our work
— Coordinated over $3 million in digital investment to sweep over 18 statewide + local seats in Virginia
— Registered over 1,000 new voters in Virginia who had their voting rights restored by Governor McAuliffe just months prior
— Ran over 12 targeted digital media programs to help over 28 Democrats win elections across five states.
— Worked with over 27 progressive partners to accelerate their digital programs and investments.

Here’s where + how we’re investing this cycle to flip this script:

— Releasing an open-source organizer guide to over 50 digital organizing tools to help progressive campaigns and organizations make smart investments that will maximize resources to move the needle.
— Training over 5,000 organizers across 21 statewide campaigns on digital organization tools and best practices to build our digital talent bench for 2020.
— Deploying over 100 targeted digital media campaigns to fip 11 chambers in 10 states, mobilizing thousands, to vote down the ballot to elect our new Democratic bench and shore up statehouses critical to redistricting efforts.

Our specific programs for this cycle will certainly define our impact in the short term, but we believe our philosophy and approach to this work are equally important and are what we really make Acronym stand out in a crowd. Here’s a bit more about what we do — and what we don’t do:

— We don’t burn your money on television ads. Or think it’s enough to serve a billion impressions of unresponsive ads on the internet. We invest in digital-first tools and tactics that reach voters where they spend their time—online+ on their phones with creative content that catches their attention and inspires them to act. Like pierogis that people want to eat with their friends after the polls.

— We don’t duplicate efforts. We identify gaps, then we fill them. We understand the power of coordination, and we encourage and facilitate it where we can to maximize limited resources and impact. See how this approach moved the needle in Virginia last year.

— We don’t only focus on the trees — or in this case the midterms. We do plan on helping Democrats win big this cycle — focused primarily on first-time candidates running for state office — but we also understand that if we don’t capitalize on the wave of enthusiasm we are seeing on our side this cycle to get more voters to the polls + on the rolls, we’ve thrown away the only shot we’ve got at getting Trump out of office in 2020. That’s why we’re focused on down ballot candidates who represent or bench for the future and have a plan to train 5000 organizers across the country on how to use social media to move the needle in November.

—We don’t do hyperbole. We call BS. We say when our programs work. We say when they don’t because being dishonest or evasive tells us you have something to hide. So we stay humble and focused and we like it that way because it keeps us scrappy and smart. And scrappy and smart means we win more elections for less money. Just don’t measure our success by how many Politico articles we’re mentioned in. You’ll be disappointed.

HOW CAN I HELP?

In order to scale the impact of our work in the short term, while taking on the slow-burn of modernizing our campaign playbook writ large, our team is aiming to raise $8 million before May 31. With $2 million committed already, we are going to need your help to raise or write the rest.

If you are interested in learning more about our programs or approach, or are feeling the very real sense of urgency and are simply ready to make an investment in ACRONYM right away, please get in touch with Tara by email or phone — [phone number redacted].