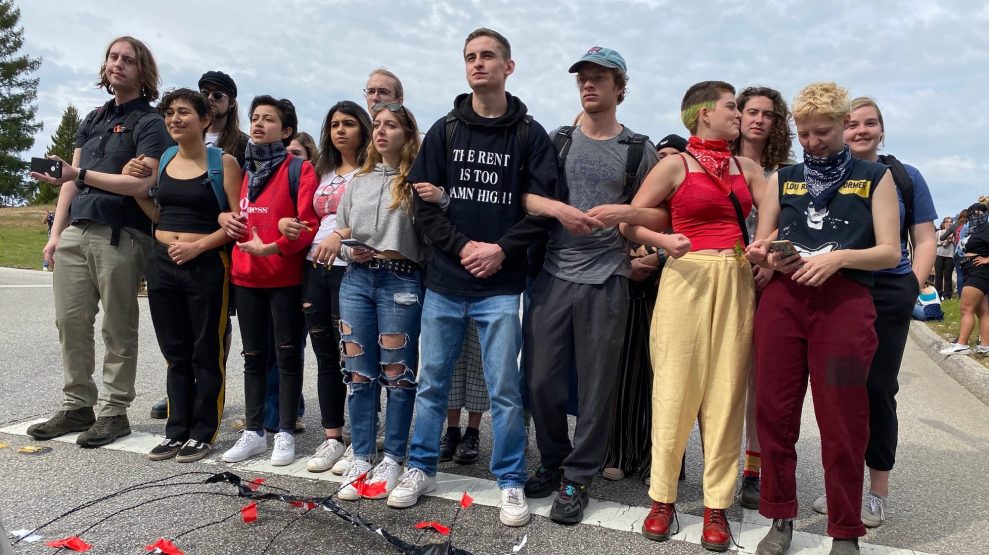 “This is a marathon, not a sprint,” Sarah Mason, a graduate student in sociology at the University of California Santa Cruz, tells a crowd of several hundred students, wrapping up the fourth day of an unprecedented wildcat strike that has drawn threats of mass dismissal and captured the attention of UC campuses across the state. Using a megaphone, Mason reminds them that LA teachers went on strike for six days last year and Oakland teachers for seven before getting their pay raises. She asks for a show of hands to see how many wanted to continue to picket the following day. Arms shoot up all around her.

Graduate student employees have been on a work stoppage since February 10, refusing to teach, hold office hours, or do other work until the university meets their demands for a cost-of-living adjustment (COLA) of $1,412 a month to help alleviate the rent burden in Santa Cruz, one of the least affordable housing markets in the country. This was an escalation from a grade strike that over 200 graduate students launched on December 9.

Strikers have filled the field of patchy grass at the main entrance to campus every day to picket with chants like “Pay us more,” “No COLA, no grades,” and “Spread the strike.” Students have been handing out water, sunscreen, and food. There are medical and legal teams on hand. There’s music—students banging on percussion instruments in the morning and Latin hip hop blasting out of speakers in the afternoon. There’s a guy printing wildcat symbols on people’s T-shirts. Some professors have even held their classes down at the picket line. The vibe has oscillated between palpable activist rage and the buoyancy of a music festival. Grad students, joined by undergraduates in solidarity, have significantly disrupted daily class operations, at times blocking the main entrance to campus by sitting in the middle of the road and linking arms in a well-organized mass direct action that has forced the university to respond.

On February 12, after an hours-long standoff, 17 students were forcibly arrested by over a hundred police officers in full riot gear brought in by the administration from outside the county. The crackdown ended in several injuries. Those arrested were suspended for two weeks. The police brutality at a university that prides itself on progressive values has made headlines and only emboldened the strikers, whose chants now include “Cops off campus, COLA in my bank account!”

Last Friday night, UC President Janet Napolitano published a letter threatening to fire students if they don’t call off the strike, and reiterated the university’s position that it refuses to negotiate with the students. “To accede to the demands of a group of employees engaged in an unauthorized wildcat strike would undercut the very foundation of an agreement negotiated in good faith by the UAW and ratified by thousands of members across the system.”

The university has given them until 11:59 p.m. tonight to submit grades for the previous fall quarter or face dismissal. For international students on a student visa—about 30 people, in all—this is de facto deportation. For teaching assistants who are parents, this could endanger a child care subsidy of $3,300 they receive per year as part of the union contract. The high stakes have challenged the unity of the strikers, as each student faces distinct and personal consequences should they lose their jobs. They will be taking a vote on Friday on how to proceed, and some appear ready to submit grades.

The strike “has been a longtime coming,” says Yulia Gilichinskaya, a student in the Film and Digital Media Department and co-president of the Graduate Student Association. She is part of a group of students that for the past year or so has been organizing around the cost-of-living crisis. A majority of student union members in Santa Cruz voted down the statewide contract signed by the UAW in summer 2018 because the annual three-percent wage increase cannot keep up with their housing costs. After Measure M on rent control failed to pass in the 2018 midterm election, Gilichinskaya says, the students started to call for a campus-specific solution out of a feeling they had no other recourse. “Everyone is so damn desperate. Some of us have been homeless and a lot of us are one paycheck away from homelessness. Housing in the Bay Area is pushing boundaries in terms of what is possible in organizing.”

In Santa Cruz, downzoning is one of the main culprits, according to Steven McKay, associate professor of sociology and director of the UCSC Center for Labor Studies. Since the 1990s, county residents have voted for leadership that prioritizes single-family homes on large lots. Attempts to build more affordable, multi-family homes have been met with resistance by NIMBY organizations that push for zoning regulations and land-use policies to block new development. In Santa Cruz, many are averse to even four-story buildings. “There’s a skyrocketing demand for housing, but no new housing, especially affordable housing,” McKay says. This has only intensified in recent years, as Santa Cruz became a commuter town for Silicon Valley. And with a student body of over 18,000, some of whom are squeezed into converted common dorm areas the university has been under pressure for a while to build more housing. A plan to build 3,000 new beds for graduate students has been frozen for over a year due to legal challenges from environmental groups.

McKay says the problem is much bigger than just Santa Cruz, and that if the university concedes, it would push the state to more fully fund the entire UC system, one of the largest employers in California. “California is as flush as ever. It has a $20 billion surplus in its budget,” he says. “The strike is a real opportunity for UC to lead on a much bigger national issue: the funding of public higher education. The strike’s caught fire because it speaks to the real need for living wages and for truly affordable college for everyone.”

Graduate student instructors, readers and graders across the UC system earn $2,400 a month, for nine months—around $21,000 a year—as part of their union contract with the United Auto Workers Local 2865, which represents more than 18,000 academic workers in the state. With average rents in Santa Cruz at $2,611 per month, many students live under extreme rent burden, paying 50–70 percent of their gross income on rent and utilities. According to a report released in October 2019, over half of renter households (nearly 21,300 of all 35,734 households) in Santa Cruz County were considered rent burdened. (Rent burden is defined as spending more than 30 percent of one’s income on rent.)

“We don’t know what our paycheck will look like this month. People are afraid they won’t get paid,” says Kelsey James, a fourth-year psychology student on strike and a member of the union. “But we also know this situation is untenable. If we didn’t do it now, people would soon be doing the same thing. It’s just unlivable. People are living in their cars. Everyone has a story about what they can’t afford.” James says she pays $1,000 for a room in a house with two other roommates, spending nearly 60 percent of her income on housing.

In January, the university responded to the grade strike by proposing two measures for the next academic year: a $2,500 need-based housing fellowship; and for doctoral students, a five-year funding program that guarantees part-time teaching assistant work. Students rejected the proposal, which they say would only decrease their rent burden by 5 percent.

While students face a tough decision on whether and how to continue their strike, their efforts have already gotten widespread attention and galvanized a sense of solidarity. The union has called on the university to come to the bargaining table and reach a resolution. Members have raised over $85,000 dollars for a support fund. Students at UC Davis, UC San Diego, UC Berkeley and others have been emboldened to make their own calls for a COLA and held various sit-ins and marches this week. Both UCLA students and UC Santa Barbara students indicated a willingness to go on full strike if UCSC students are fired.

UCSC faculty members have urged the university to halt disciplinary measures and instead open a direct line of communication. Some have joined students at the picket line. The Santa Cruz City Council voted unanimously to endorse the students’ demands. The executive board of the Council of UC Faculty Associations, representing faculty on all 10 UC campuses, issued an open letter of support urging a resolution. Over 2,000 non-UCSC faculty across the country have signed a noncooperation pledge to boycott UCSC until it “provides a more equitable standard of living.” The West Virginia teachers who went on strike and successfully increased their wages in 2018, sent a letter of support. City bus drivers in Santa Cruz have refused to cross the picket and drive into campus. And on Wednesday, Democratic frontrunner Bernie Sanders tweeted his support for the strikers.

This strike comes just weeks after Moms 4 Housing activists in Oakland secured a victory against a home-flipping business simply by occupying a vacant home. The acute burden of living in California has necessitated an acute response from Californians. “Housing politics,” McKay says, “is the new class politics.”

Mairav Zonszein is an Israeli-American journalist who covers resistance movements and all things dissent. She has written for the Washington Post, the New York Review of Books, the Columbia Journalism Review, and many more. She tweets at @Mairavz.