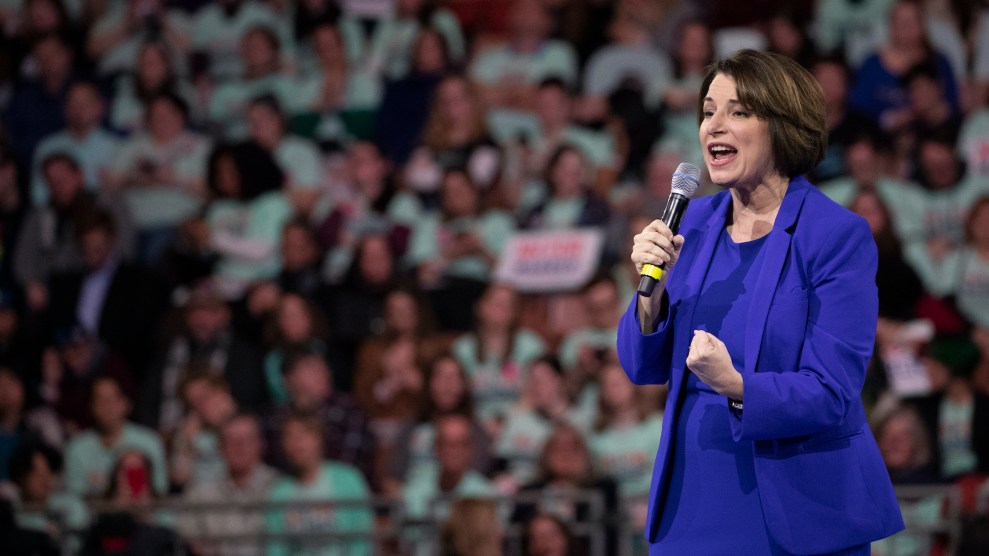 Amy Klobuchar, riding a wave of momentum from the Friday Democratic presidential debate, has raised $2.5 million in the two days since. The senator from Minnesota broke the news of her fundraising haul in front of a large crowd in New Hampshire on Sunday, two days ahead of the primary election here.

The crowd at the Manchester get-out-the-vote rally was big—with at least five hundred supporters filling a large room to capacity at Southern New Hampshire University—and the crowd excitable, but the biggest cheers weren’t for promises of a new liberal agenda. The crowd wanted to hear about electability, moderation, and bipartisanship. In fact, the biggest cheer of the afternoon was for praise of Mitt Romney and his vote for impeachment. The crowd’s enthusiasm for the former GOP presidential nominee seemed to surprise even Klobuchar.

“The world is upside down and that tells it all,” she laughed.

Her message of moderation was a hit, though. “I don’t always see things in extremes,” she said, in another crowd-pleasing set piece. “If you’re tired of the extremes, you have a home with me.”

Klobuchar didn’t disparage any other candidates by name, but she was blunt in her assessment that some of her rivals were promising too much, like free college tuition for all. Klobuchar explained her platform of supporting free tuition for one- and two-year college programs and reducing, but not eliminating, the cost of four-year college as a matter of prudence and necessity.

Klobuchar’s Friday night debate performance arguably gave her the juice to make jabs like that. The $2.5 million she raised in the past two days is a huge number for her: Over the course of her entire campaign, she has raised $28.8 million, and in the last three months, she raised just $11.4 million. It was a boost that she told the crowd empowered her to stay in the fight into South Carolina and Nevada.

She continually referred to her debate performance in Manchester, and for some audience members, the prospect of Klobuchar debating Trump seemed to be one of the bigger reasons for their support.

“I think she’d destroy Trump in a debate,” said Vin Sylvia, who had travelled from Massachusetts to see Klobuchar.

Heather Webster said she had been considering Biden, but he had disappointed her at the debate.

“I was leaning towards him until Friday,” she said, before Klobuchar took the stage. “I just don’t feel good about his debate style. But there’s something about her confidence.”