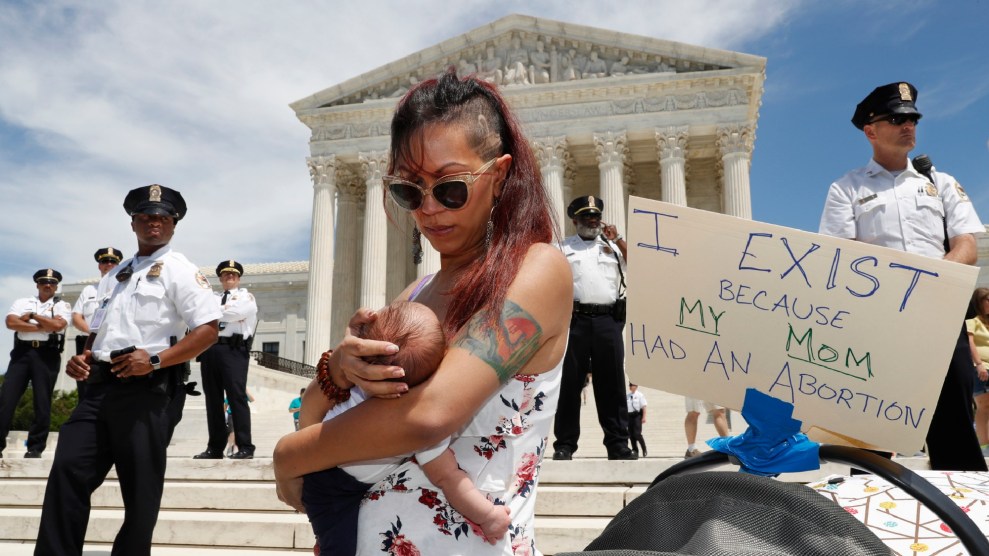 A protest against abortion bans outside the Supreme Court in May 2019.Jacquelyn Martin/AP

In 1973, Jane Roe, whose real name was Norma McCorvey, won a landmark victory at the Supreme Court: She and every woman in the United States were guaranteed the constitutional right to an abortion. But this didn’t actually resolve the problem that led McCorvey to file her suit three years earlier; she gave birth while Roe v. Wade was being litigated. The case also threw McCorvey into a harsh spotlight she never wanted. She later became an anti-abortion crusader, but she was forever forced to carry the burden of being the plaintiff in the case that became shorthand for abortion rights.

In the years that followed Roe, subsequent court rulings enshrined a slew of other abortion protections, including one that would protect other pregnant people from those types of burdens. Nearly 50 years ago, a lesser-known but critical case, Singleton v. Wulff, gave abortion providers the power to sue for their patients’ well-being, known as third-party standing. That ruling shifted the legal burden from individual women to clinics with greater resources.

But that safeguard is now at risk of disappearing. If it were to be eliminated, the consequences could be vast—upending abortion law and litigation at a time when the basic right to the procedure is already vulnerable.

“It’s almost impossible to imagine that an individual patient…would divert the resources required to litigate the case away from the challenges of her own personal life, to vindicate the rights of other women in order to prevent the law from going into effect,” says TJ Tu, a lawyer representing June Medical, the Louisiana abortion provider, on behalf of the Center for Reproductive Rights.

“It is almost as much of a threat to the right to abortion as reversing Roe v. Wade.”

Amy Hagstrom Miller, the founder and CEO of Whole Woman’s Health, which runs eight abortion clinics across the country, has firsthand experience leading the legal fight against abortion restrictions. In 2015, she sued Texas over an anti-abortion law nearly identical to Louisiana’s. She describes the process of being the plaintiff in Whole Woman’s Health v. Hellerstedt, in which the Supreme Court struck down the Texas law in 2016, as a trauma that she’ll never forget, and not just because she was forced to close clinics and turn away women who needed abortion care. She vividly recalls the opposing attorneys raking through Whole Woman’s Health’s emails in the discovery process and the vitriol that she and her colleagues received as a result of being the faces of a high-profile case.

“If a pregnant person had to bring a lawsuit on behalf of themselves, and undertake what we have gone through, it’s not only ridiculous, it’s actually cruel,” Hagstrom Miller says. “I’ve been through depositions, I’ve been in the witness stand myself. And even if I was [anonymous], how disruptive that is, and the discovery and the process and the time it takes to even go through the preparation for a deposition or being a witness, it’s really, really difficult. So just saying, ‘Oh, well, that’s the only path to justice that a patient could have,’ it’s scary and it’s also just extreme.”

It would be riskier for an individual to bring a suit today than it was for McCorvey in the 1970s. The inescapable gaze of the internet brings risks of harassment and doxxing. “To think that somebody has to bring a lawsuit in order to assert their rights and sacrifice their confidentiality, sacrifice their family’s well-being…,” Hagstrom Miller says, trailing off.

In states like Louisiana, which last year passed one of the most restrictive early gestational abortion bans in the country, it’s difficult to imagine a pregnant plaintiff bringing a suit while surmounting a whole host of other restrictions. The average person seeking an abortion in the state is a low-income woman living with a child or children of her own, miles away from the nearest clinic. She often has to find child care, money for the procedure, and transportation. She has to return to the clinic, because Louisiana has a mandatory 24-hour waiting period between a consultation and an abortion, which means more travel and child care costs.

If women are forced to file the lawsuits individually, they would face all of those obstacles while simultaneously having to marshal the resources to fight a drawn-out legal battle against powerful state entities, potentially over the course of years. In addition, they would be required to delay access to a medical service they have already decided they need because they would have to be pregnant and seeking an abortion when the lawsuit was filed.

Ultimately, abortion providers are best suited to argue these cases, says Marc Hearron, senior counsel for the Center for Reproductive Rights. They see the wider landscape—how restrictions impact a slew of different patients—and also how individuals can suffer. The providers can articulate the lack of medical basis for an admitting-privileges requirement and explain why these privileges are next to impossible to get, in ways that individual patients are unlikely to understand. “Any patient who is seeking an abortion doesn’t necessarily have access to all of those facts and may not even understand why it is that she is unable to access an abortion,” says Hearron. “All she knows is that the clinic has shut down.”

Attacking third-party standing is a particularly shrewd strategy on the part of anti-abortion opponents. Mary Ziegler, a professor at Florida State University who studies the history of abortion law, explains that the approach calls into question the intentions of abortion providers. “The general argument is that abortion providers don’t have patients’ best interests in mind,” Ziegler says. “If the court accepts that argument, it will say a lot about the court’s willingness to buy arguments that abortion is bad for patients or bad for women.”

It also will say a lot about who gets to decide what, exactly, is in the best interest of women who seek abortion care.

Next week, the lawyers for June Medical will argue that there is no difference between the Texas law that was at the heart of Whole Woman’s Health and the 2014 Louisiana law. But since that ruling, two new anti-abortion justices have been confirmed to the court, and earlier this year, the Trump administration filed a brief that proposes eliminating third-party standing for providers. Additionally, in the 2016 Whole Woman’s Health case, conservative Justice Clarence Thomas made a direct argument against third-party standing for abortion providers in his dissent.

If the court does dismantle third-party standing all-together, the impact could sweep the entire judiciary system, as many of the cases currently being fought in the courts by clinics—in Alabama, Missouri, Georgia, and elsewhere—may become moot or have to be refiled, says Stephen Wermiel, a constitutional law professor at American University Washington College of Law. While their exact futures would depend on how narrow or broad the court makes its final ruling, there would, without a doubt, be a “destabilizing effect,” says Tu.

If the court eliminates third-party standing for abortion providers, many women and abortion rights supporters may not even know there’s been a change. Dismantling abortion rights by attacking an obscure legal principle could result in less pushback than has occurred in states that are passing outright bans on early-term abortions. “Once [abortion opponents] passed the six-week bans, the public really turned against them,” says Leila Abolfazli, who leads the reproductive rights program at the National Women’s Law Center. “People were protesting in the middle of the street in Alabama, in the middle of the week. [Anti-abortion advocates] get that.”

Even if the legal principle at issue is opaque, the stakes of the case are high. “It is almost as much of a threat to the right to abortion,” says Tu, “as reversing Roe v. Wade.”