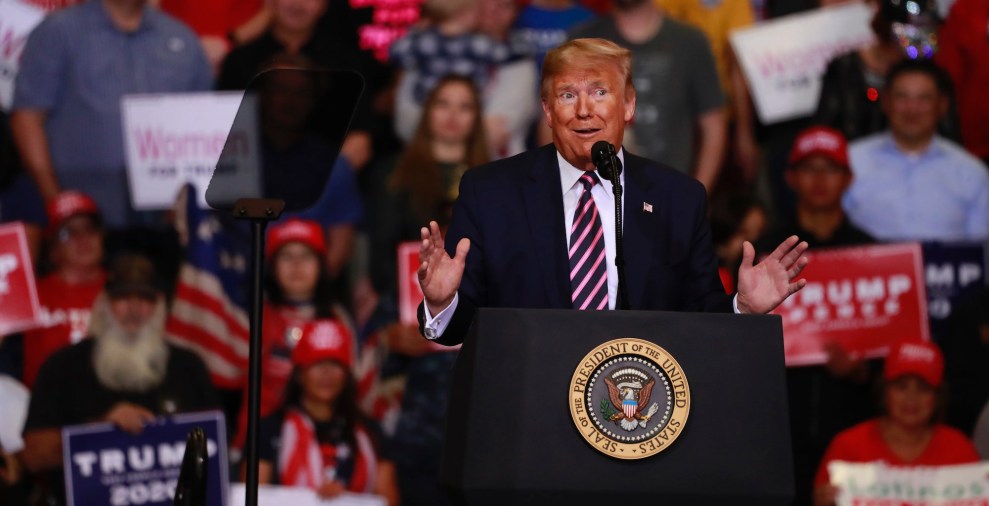 The Nevada Democratic caucus is today, and President Donald Trump spent his morning on Twitter, suggesting that Democrats “be careful of Russia, Russia, Russia.”

Democrats in the Great State of Nevada (Which, because of the Economy, Jobs, the Military & Vets, I will win in November), be careful of Russia, Russia, Russia. According to Corrupt politician Adam “Shifty” Schiff, they are pushing for Crazy Bernie Sanders to win. Vote!

There is a bit to unpack here.

First, there’s Trump’s history of dismissing concerns about Russian interference. Faced with evidence of Russian meddling in the 2016 election, Trump has claimed  it was actually the work of a deep state conspiracy. And when he was briefed recently about what Russia plans for the 2020 election—which includes disrupting the Democratic primaries and general election to undermine American confidence in the democratic process—he basically threw a tantrum.

In his tweet this morning, Trump seems to be referencing a 2019 report from special counsel Robert Mueller that indicated that Russia might want to boost Sanders in his primary against Hillary Clinton. The New York Times reported Friday, “The report quoted internal documents from the Internet Research Agency, a troll factory sponsored by Russian intelligence, in an order to its operatives: ‘Use any opportunity to criticize Hillary and the rest except for Sanders and Trump — we support them.'”

Then there is the name-calling of Rep. Adam Schiff, who led the impeachment proceedings. Schiff attended the recent intelligence briefing with Trump, and Trump was reportedly angry that his critic was present. At that briefing, officials confirmed that Russia has hoped to disrupt the 2020 Democratic primaries.

The final thing to note here: In his tweet, Trump urged citizens to “Vote!”—yet Nevada Republicans actually are missing out on the primary process. In a bid last year to avoid a possible serious challenge to Trump in the primary, the state GOP canceled its caucus.