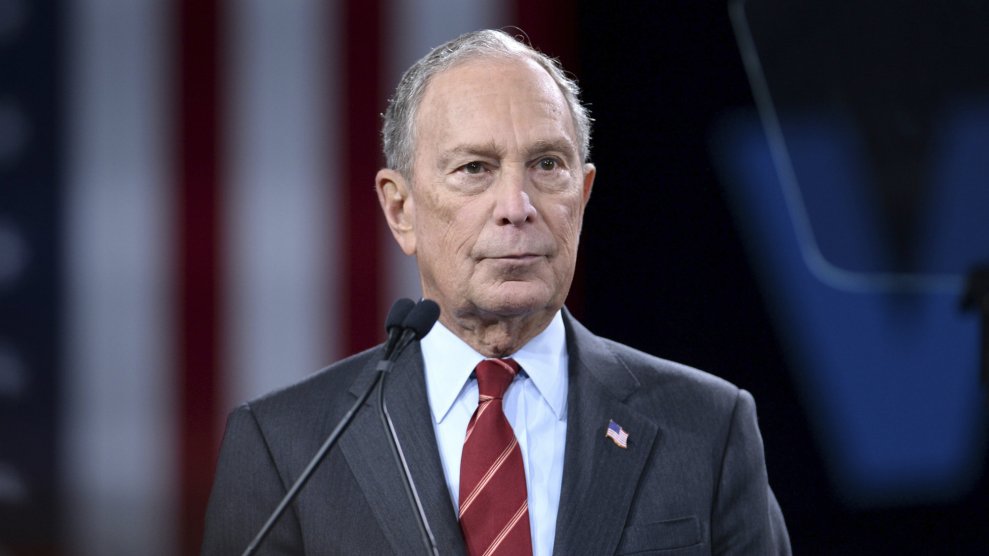 It’s the day of the New Hampshire primary and 2020 Democratic hopeful, former mayor of New York City Michael Bloomberg, is trending on Twitter for all the wrong reasons. On Monday, podcast host Benjamin P. Dixon released leaked audio of a 2015 Aspen Institute speech in which Bloomberg offered what can only be described as a racist defense of New York City’s controversial stop-and-frisk policy. The New York City Police Department policy of detaining, questioning, and searching people on the street for guns or drugs routinely lead to a disproportionate amount of Black and brown New Yorkers being targeted by the police. It was roundly criticized by activists and communities of color, and Bloomberg himself issued a long overdue apology for the policy in November. But President Donald Trump was always a big fan of stop-and-frisk—until now.

On Tuesday, #BloombergIsARacist began trending on Twitter, and the president, who has often referred to himself the “least racist person in the world” announced with all-caps astonishment, “WOW BLOOMBERG IS A TOTAL RACIST!” in a now-deleted tweet in a response to the leaked audio.

He also retweeted a tweet about Bloomberg being a racist that included a picture of the president with the former mayor. Despite the user changing their Twitter name to “BERNIE BEATS TRUMP” this tweet has yet to be deleted.

Bloomberg seized on the opportunity to reframe the conversation, saying in a statement, “President Trump’s deleted tweet is the latest example of his endless efforts to divide Americans.” He added that he regrets using the policy and noted that he had apologized in November before entering the race. “In contrast, President Trump inherited a country marching towards greater equality and divided us with racist appeals and hateful rhetoric.”

Here’s where the controversy began. In the 2015 audio clip, Bloomberg can be heard defending the policy during a speech at the Aspen Institute. “Ninety-five percent murderers and murder victims fit one M.O.,” he said. “You can just take the description, Xerox it, and pass it out to all the cops. They are male, minorities, 16-25. That’s true in New York, that’s true in virtually every city.” The former mayor then went on to say that all crime takes place in communities of color. “Because we put all the cops in minority neighborhoods,” he explained. “Yes, that’s true. Why do we do it? Because that’s where all the crime is.” Bloomberg requested that the audio not be released.

Audio of @MikeBloomberg’s 2015 @AspenInstitute speech where he explains that “you can just Xerox (copy)” the description of male, minorities 16-25 and hand to cops.

Bloomberg had video of speech blocked.

Perhaps because of the problematic explanation he gives for #StopAndFrisk pic.twitter.com/Fm0YCi4ZRy

As usual, the president’s cronies piled on. Trump’s son, Donald Jr. tweeted the leaked speech using the hashtag #BloombergIsARacist. Brad Parscale, the president’s campaign manager also weighed in without a hint of irony. “So a big test for [Bloomberg News] today,” he tweeted referring to Bloomberg’s news outlet. “Will they write their boss is a complete racist. This video is horrible.” But while they gleefully attacked Bloomberg, they are conveniently ignoring the fact that the president once heaped praise on Bloomberg, the NYPD, and their stop-and-frisk policy. Let’s take a short trip down memory lane to see the president’s very special affection for stop and frisk.

In 2012, he said he “fully supports” the mayor and the NYPD, who presumably kept New Yorkers safe since the September 11 attacks.

I fully support the @NYPD, @MayorBloomberg and @CommissionerKelly. They should all be honored for protecting us since 9/11—not demonized.

In 2013 he declared that stop-and-frisk works. As the backlash grew, he defended the tactic via Twitter for the next few months.

Stop and frisk works. Instead of criticizing @NY_POLICE Chief Ray Kelly, New Yorkers should be thanking him for keeping NY safe.

.@NY_POLICE Commissioner Ray Kelly has done a top job keeping NYC safe. Stop & Frisk has been a critical tool for the NYPD.

He even went on to say that he would gladly be stopped-and-frisk.

"@The_Anti_Fox: @realDonaldTrump @NY_POLICE then Donald will be OK being stopped and frisked 3 times a week, making you late" O.K. with me!

Fifteen minutes later, he decided that stop-and-frisk was so great that other cities should get in on the action.

Chicago is a shooting disaster-they should immediately go to STOP AND FRISK. They have no choice, hundreds of lives would be saved!

Even though stop-and-frisk was unfairly targeting people of color, Trump said the policy was keeping people safe violent criminals and jihadists.

Trump also suggested ending stop-and-frisk would lead to crime increases and a terrorist attack—and NYC politicians would have no one to blame but themselves.

If Stop & Frisk is struck down by the pandering NYC politicians, increases in crime & eventual terrorist attacks will be on them.

But then all that love for Bloomberg just…stopped. Donald Trump changed his tune once the former mayor endorsed Hillary Clinton in the 2016 election. But Trump drew a distinction between the mayor and his signature policy and encouraged Chicago to adopt stop-and-frisk in 2018.

Last Friday, perhaps spooked by Bloomberg’s rise in the polls, Trump retweeted CNN commentator and criminal justice reform advocate Van Jones saying Bloomberg’s stop-and-frisk policy was a “horror show” for Black and Latino New Yorkers. And then there was the now-deleted tweet.

All this outrage over Bloomberg is one part of Trump’s effort to reach Black voters. The Trump campaign launched the Black Voices for Trump, an outfit headed by failed presidential candidate and pizza mogul Herman Cain. At a recent event in a Black community in Cleveland,  Darrell Scott, a Black conservative pastor and advisory board member of Blacks for Trump ran a cash giveaway in which attendees drew tickets from a bin and the winner walked away with hundreds of dollars. But so far, the effort seems to be lacking traction. Perhaps, this major pivot against stop-and-frisk and the attacks on Bloomberg are a new way to win more Black votes. All that’s necessary would be to overlook Trump’s seven year defense of stop-and-frisk.