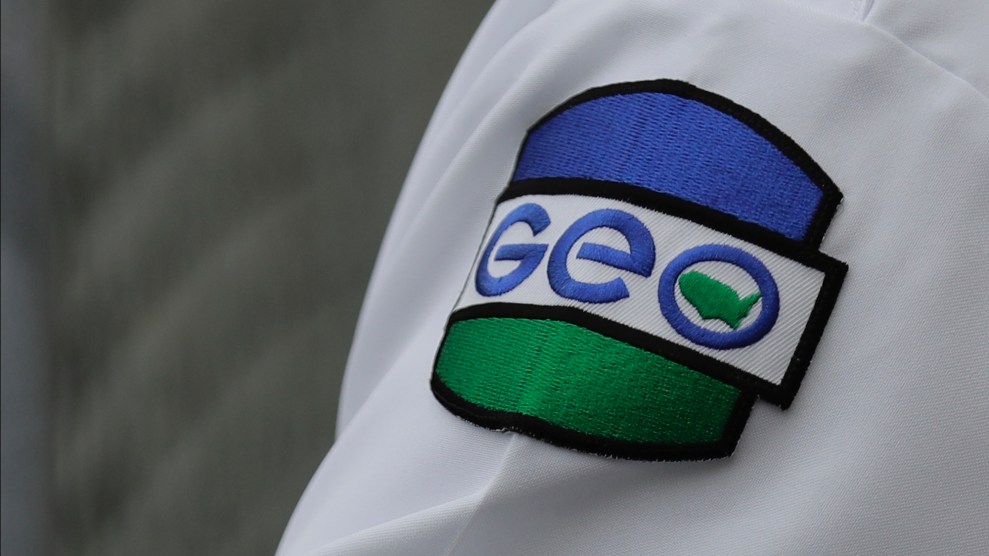 A GEO Group guard during a tour of an immigration detention center in DecemberTed S. Warren/AP

For the third time in three days, people detained by Immigration and Customs Enforcement were pepper-sprayed on Wednesday as the coronavirus pandemic raises tensions within immigration jails. All of the pepper-spraying incidents have occurred at detention centers run by the private prison giant GEO Group.

ICE spokesperson Bryan Cox wrote in a statement that four people were pepper-sprayed while in a room with 75 other immigration detainees at the LaSalle ICE Processing Center in Jena, Louisiana. Cox said these measures were used after the detainees tried to “force their way out of the housing area.”

A draft of a court declaration from Mariel Villarreal, an immigration attorney at Pangea Legal Services, presents a more comprehensive and disturbing picture. Villarreal’s declaration states that the pepper-spraying occurred as women received a presentation about the coronavirus yesterday morning. The declaration is based on a conversation Villarreal had with a client, who was one of the 79 women in the room where people were pepper-sprayed on Wednesday.

“[My client] informed me that during the presentation, the women had questions about the virus and were expressing fears about their safety in the detention center,” the attorney wrote in the declaration. “[My client] stated that the women’s questions were going unanswered and their concerns were being ignored by the officers.” (Mother Jones is withholding the client’s name because Villarreal has not yet obtained permission to share it publicly.)

The latest use of force comes as immigrants and asylum seekers detained by ICE grow more fearful about being crammed into immigration jails in the midst of a pandemic. On Monday, about 60 people were pepper-sprayed at another GEO Group ICE detention center, in Texas, after they demanded to be released to protect themselves from the virus, the San Antonio Express-News reported. ICE announced on Tuesday that a detainee in New Jersey had tested positive for COVID-19, the first confirmed case in its custody. On Wednesday, I reported that seven men were pepper-sprayed at GEO Group’s Pine Prairie, Louisiana, immigration detention center after they refused to go outside because they were fearful of being mistreated by guards while isolated from other detainees.

The women believed they were teargassed, but Cox said it was pepper spray that was used against them. Villarreal’s declaration continues:

[My client] then informed me that the officers grew impatient and angry with the women and released tear gas into the room where they were giving the presentation. The officers promptly left the room and locked the doors.

[She] told me that her and the rest of the women were left locked inside the room with tear gas for approximately one hour. She stated that the women were screaming to be let out of the room, but no one came to their aid.

[She] stated that the women were coughing, crying, and that some fainted throughout the approximately one hour that they were locked in the room with tear gas.

[She] said that after approximately one hour, officers came and unlocked the doors, and they entered wearing full protective face gear to prevent effects of the tear gas.

[She] informed me that, as we were speaking, her eyes were red and burning and that her whole neck area and throat were in pain.

In the middle of our conversation, the call was lost and I did not receive a call back from [my client]. I called the ICE Processing Center to attempt to be reconnected with [her], but I was informed that it was not possible at that time.

Data released by ICE on Wednesday showed that the number of people in the agency’s custody increased by more than 700 between March 14 and March 21, rising to more than 38,000 in total. Health experts and immigrant advocates are calling on ICE to release people from detention who don’t pose a threat to public safety, but ICE is refusing to do so.