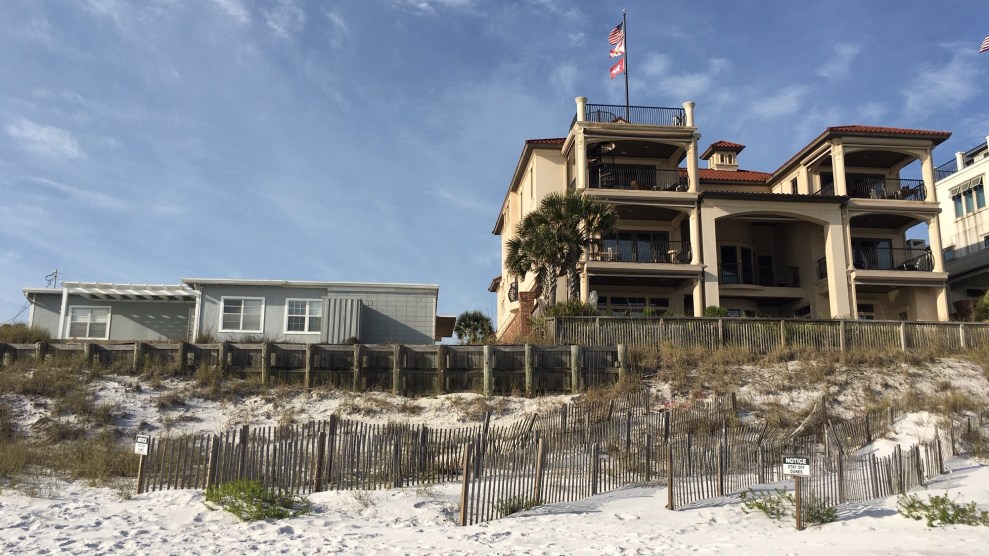 Mike Huckabee's beach house (right) and some of the sand he claims belongs only to him.Stephanie Mencimer/Mother Jones

Mike Huckabee has been trying for years to keep people off the beach in front of his $6 million McMansion on the Gulf Coast of Florida. Since he bought the house in 2011, he has complained that the 115-foot spit of sugar-sand beach in front of his Walton County property has been fouled by pot-smoking kids and pooping dogs. Most shocking of all, he once saw a young couple strip naked and have sex on a YOLO board there at two in the afternoon. But now that the county has finally closed the beach and kicked out all the spring breakers as part of its pandemic response, Huckabee has sued the county because he can’t go out there either.

On Monday, the former Arkansas governor and presidential candidate joined with a bunch of his rich neighbors to sue Walton County, Florida, in federal court, alleging that the county’s beach closing order has left them faced with “threats of criminal prosecution for doing no more than setting foot in their own backyards that they own.” They told the court that the beach closure order constitutes an illegal taking of property without compensation and violates their constitutionally guaranteed property and due process rights. “The county’s ordinance forces family members into a confined space within their house rather than allow them to social distance and recreate in their sandy backyard,” the plaintiffs complained in a court document. (There has been an ongoing and heated legal fight over whether Huckabee really does technically “own” the beach in front of his house, which had been used by the public for centuries before he moved there.)

Ever tone deaf, Huckabee isn’t likely to win many fans as he embarks on this particular fight with Walton County, where like most of America, people are confined in far smaller spaces than the one enjoyed by the Huckabee family. Huckabee does not mention in his lawsuit that his family is “confined” to a 10,000-square-foot monstrosity with six bedrooms, seven-and-a-half bathrooms, and its own private pool where they can recreate, sunbathe, and swim unmolested by the county cops.

The lawsuit stems from a decision by Walton County to close its own beaches on March 19, when Florida Governor Ron DeSantis (R) was still dithering over issuing a state-wide closure as crowds of kids on spring break enjoyed one last hurrah on state beaches. The original county order only covered public beaches. But people continued to flood there from out of town to quarantine in their second homes or condos, many of which have private beaches that were getting too crowded. So, on April 2, the county commission held a meeting and voted to amend its original emergency beach closing order to cover private beaches, too. Some of the property owners complained about the “taking” at the meeting, but they didn’t find much sympathy. “One-third of the people in this county have been laid off probably,”  Commissioner Danny Glidewell said at the meeting. “This is a sacrifice that’s in the best interests of the people of Walton County…and I don’t care who doesn’t like it.”

Undeterred, three days later, Huckabee filed his lawsuit, asking for an emergency injunction that would reopen his little patch of sand. A judge will hear the arguments on Monday. “I don’t know how he sleeps at night,” Daniel Uhlfelder, a Walton County attorney who has tangled with Huckabee before over public access to the beach near his house, told me. “This is a temporary attempt to protect the public. We’re in a pandemic. People are dying. And he’s suing the sheriff in federal court.”