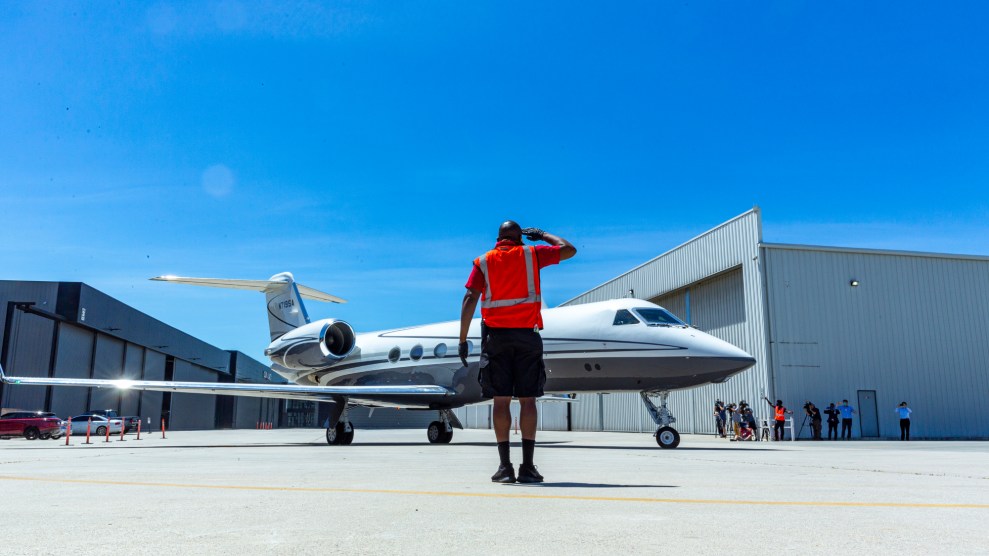 This story was published originally by ProPublica, a nonprofit newsroom that investigates abuses of power. Sign up for ProPublica‘s Big Story newsletter to receive stories like this one in your inbox as soon as they are published.

An Omaha, Nebraska-based private jet company whose principal owner donated generously to Donald Trump and Republicans ahead of the 2016 election received $20 million in taxpayer aid from the federal bailout package passed in March.

Jet Linx Aviation, which caters to well-to-do CEOs and executives, was the second private plane company founded or owned by Trump donors to receive federal funds designated for the airline industry under the Coronavirus Aid, Relief and Economic Security Act. CNBC reported on Thursday that Clay Lacy Aviation, a Van Nuys, California-based private jet company whose founder has given nearly $50,000 to the Republican National Committee and Trump, got $27 million in federal funds.

Jet Linx Management Company Vice Chairman John Denny Carreker and his wife, Connie, gave $68,100 to Trump’s campaign, the Republican National Committee and the Trump Victory Committee between October 2015 and November 2016, Federal Election Commission filings show. Connie Carreker gave an additional $1,000 to the Trump campaign in November 2018, according to the FEC.

Most of the CARES Act money for the airline industry has gone to commercial or regional carriers. American, Delta, United and Southwest collectively were allotted almost $19.5 billion, more than three-quarters of the total reserved for the passenger airline industry.

But private charters haven’t been left out.

About 70 such companies received CARES Act funds as of April 27, according to the first round of disclosures to 96 recipients published this week. That represents just a fraction of the roughly 2,000 private jet companies operating in the U.S., as compiled by Private Jet Card Comparisons, an independent buyer’s guide. In total, they received about $157 million in taxpayer aid, less than a percent of the more than $23 billion disbursed so far for the passenger airline industry.

Jet Linx and Clay Lacy are among the most prominent in the industry: Last year, the flight tracking firm Argus Traqpak ranked them fifth and 11th, respectively, in hours logged, according to a list of the top 25 private air charter operations. No other top 10 private jet company received federal grants. The average grant amount for the 70 private jet companies to receive aid was $2.2 million, about a tenth of what Jet Linx and Clay Lacy each received.

A number listed for the Carrekers at their Dallas home wasn’t in service, and a press representative for the company hasn’t responded to emails seeking comment. A Treasury Department spokeswoman said campaign contributions play no role in determining which companies received federal funds, requirements that were set by Congress.

CNBC reported that Clay Lacy did not respond to a request for comment on its reporting.

Lawmakers set aside $25 billion for passenger airlines in the coronavirus relief bill. Companies that earned at least half their revenue last year by flying people from place to place could apply for grants from a special program within the CARES Act designed to cover payroll and benefits for workers. The size of the grants companies received is supposed to be based on how much they paid their employees in salary and benefits between April and September last year. The law restricts how much executives are allowed to take in compensation.

The Treasury Department declined to say how many total companies applied for the payroll grants, how many were private plane companies or how many applicants were deemed ineligible for funds. A spokesman for the Transportation Department said officials verified that applicants held up-to-date “certificates and authorizations” before the Treasury distributed them money.

It wasn’t clear when the other passenger airline companies granted payroll aid would be publicly disclosed.

Jet Linx claims an 112-aircraft fleet that flies out of 18 cities where it operates its own private terminals. The company says it has 450 workers, who serve as flight crew and operations, maintenance and support staff.

Jet Linx offers well-heeled customers membership packages that give them access to luxury plane rides for a fee. On its website, Jet Linx offers members who pay $5,000 up front access to any size jet for pay-as-you-fly costs. Hourly rates can run up to $4,500 per hour.

Do you work for a company that was denied CARES Act funds? If so, or if you were laid off from a company that received the federal aid, email Jake Pearson at jake.pearson@propublica.org