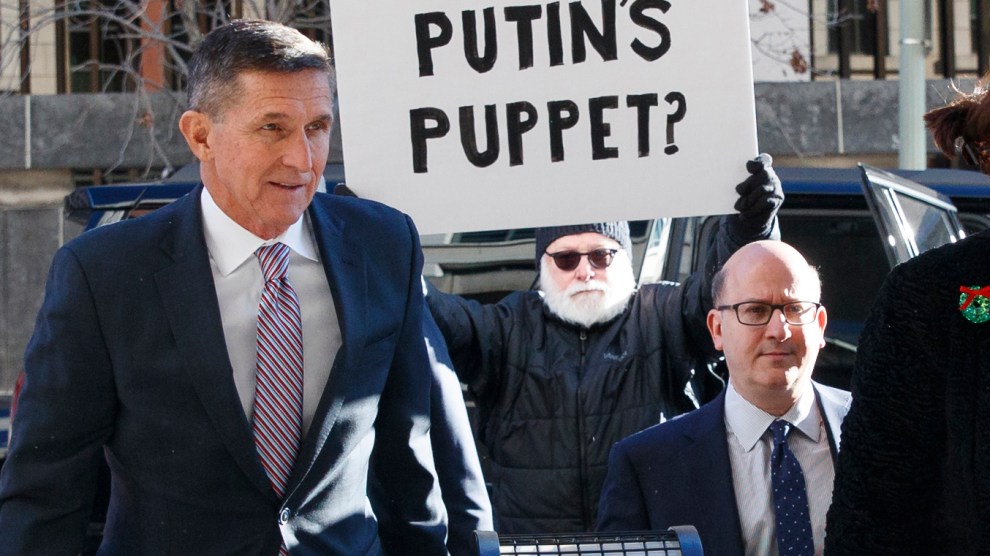 Michael Flynn did something far worse than lie to the FBI. He betrayed the United States. That’s the major revelation of the just-released transcripts of the conversations he had during the presidential transition with Russian Ambassador Sergey Kislyak.

Trump and his crew tried to undo reality and whip up a baseless conspiracy theory that Trump has dubbed the “Obamagate” scandal, with a supposedly victimized Flynn in a starring role.

Up until now, the Flynn scandal has generally centered on his criminal case, in which Flynn, Donald Trump’s first national security adviser, was charged with—and pleaded guilty to—lying to FBI about his calls with Kislyak. Flynn told bureau agents that he had not discussed the sanctions imposed on Russia by the Obama administration in response to Vladimir Putin’s attack on the 2016 election. Well, he had. And Flynn had even encouraged the Russians to not retaliate severely, suggesting that when Trump took office things between Moscow and Washington could be smoothed over. The FBI knew this because US intelligence had intercepted those calls, presumably part of routine surveillance of the Russian official. Flynn took a deal, and he pleaded guilty to lying to avoid being charged for an unrelated crime (failing to register as a foreign agent for Turkey).

But then Trump and his crew tried to undo reality and whip up a baseless conspiracy theory that Trump has dubbed the “Obamagate” scandal, with a supposedly victimized Flynn in a starring role. They claimed Flynn was unfairly targeted by vengeful Deep Staters who “unmasked” him (by requesting his name, which was redacted in intercepts of his conversations with Kislyak, be revealed to US officials with authority to obtain this information) and who then somehow cooked up the charge that Flynn lied to the FBI. Both halves of this bogus controversy are not supported by facts. Unmasking is a routine action that happens thousands of times a year within the US government. There is no evidence that Obama administration officials were spying on Flynn. (Unmasking is not spying; when an official asks for an identity to be unmasked, he or she doesn’t know who that person is.) But the bottom line, as already noted, is that Flynn had indeed lied.

But here is where the president and his minions screwed up. To promote the Obamagate double-distraction—this phony scandal is meant to draw attention from Trump’s inept response to the coronavirus pandemic and from Russia’s attack on the 2016 election, which was mounted to help Trump—Trump and Co. called for the release of highly classified intelligence documents that would supposedly confirm Flynn was unmasked as part of an anti-Trump plot waged by outgoing Obama officials. On cue, then-acting Director of National Intelligence and ardent Trump partisan Richard Grenell released documents related to the unmasking. They showed no conspiracy against Flynn. That release, though, opened the door to a much more profound disclosure.

“Let’s keep this at a level that uh is, even-keeled, okay? Is even-keeled. And then what we can do is, when we come in, we can then have a better conversation about where, where were gonna go, uh, regarding our relationship.”

The next step was to make public the transcripts of Flynn’s conversations with Kislyak, which occurred in December 2016 and January 2017. Friday night, newly confirmed Director of National Intelligence John Ratcliffe released these documents—and they certainly reaffirm that Flynn lied to the FBI. In these calls, Flynn beseeched Russia not to over-react to Obama’s sanctions, noting that would make it tougher for the incoming Trump administration to work with Russia. For instance, on one call, Flynn says, “Let’s keep this at a level that uh is, even-keeled, okay? Is even-keeled. And then what we can do is, when we come in, we can then have a better conversation about where, where were gonna go, uh, regarding our relationship.”

But what is most scandalous and damning in these transcripts is what Flynn did not say.

At no point does Flynn castigate Kislyak for Russia’s intervention in the 2016 election. He does not confront the Russian ambassador for Putin’s covert operation to subvert American democracy. He does not tell Kislyak that Moscow will have to pay a price for hacking the Democrats and using the stolen information to influence the election for Trump’s benefit. Flynn, a former head of the Defense Intelligence Agency, does not warn Kislyak against any further Russian information warfare targeting the United States. As the Obama administration was trying to impose a punishment on Putin for that attack, Flynn, on behalf of the Trump gang, was sending an utterly different message: We don’t care about that.

Think about this perverse set of interactions: the incoming national security adviser was essentially telling a foreign adversary that the new president wasn’t concerned about an attack on the United States and, moreover, indicating that Trump didn’t intend to do anything about it. In fact, Flynn was signaling to Putin that once Trump took office, Trump wouldn’t be pursuing the matter and, instead, would be reaching out to Russia as a partner. (A few months later, Trump, in the Oval Office, would tell Kislyak that directly.)

There’s been a lot of screaming within TrumpWorld about Flynn being persecuted. Attorney General Bill Barr recently had the Justice Department drop the Flynn case after Flynn pleaded guilty. And Trump, who fired Flynn for having lied to Vice President Mike Pence about his conversations with Kislyak, has tried to transform Flynn into an Obamagate martyr. All this sound and fury is a deflection. Flynn is guilty as charged. But his true crime is against American democracy, and it reflects the original sin of the Trump presidency. The 2016 election was attacked by an overseas power. And throughout the campaign, Trump and his top advisers aided and abetted that attack by echoing Putin’s false denials. They said there was no attack under way and provided the Kremlin cover. And as soon as the election was over, Trump continued to discount the Russian intervention or deny it ever happened.

All this sound and fury is a deflection. Flynn is guilty as charged. But his true crime is against American democracy.

Trump and his henchmen let Putin get away with it. That’s what Flynn was doing during his conversations with Kislyak. He was dealing with the Russians as if there had been no attack. He was abandoning his obligation to defend the United States from foreign assault—as Trump has done. No doubt, Trump and his amen chorus will continue to argue about the details of Flynn’s legal case and insist, without evidence, that he was framed by an evil Obama cabal. But in a way, that’s a sideshow. Flynn’s fundamental transgression is much larger and deeper than his lies to the FBI gumshoes. The transcripts, released due to Trump’s bogus Obamagate chase, show a darker reality: Flynn double-crossed American democracy.