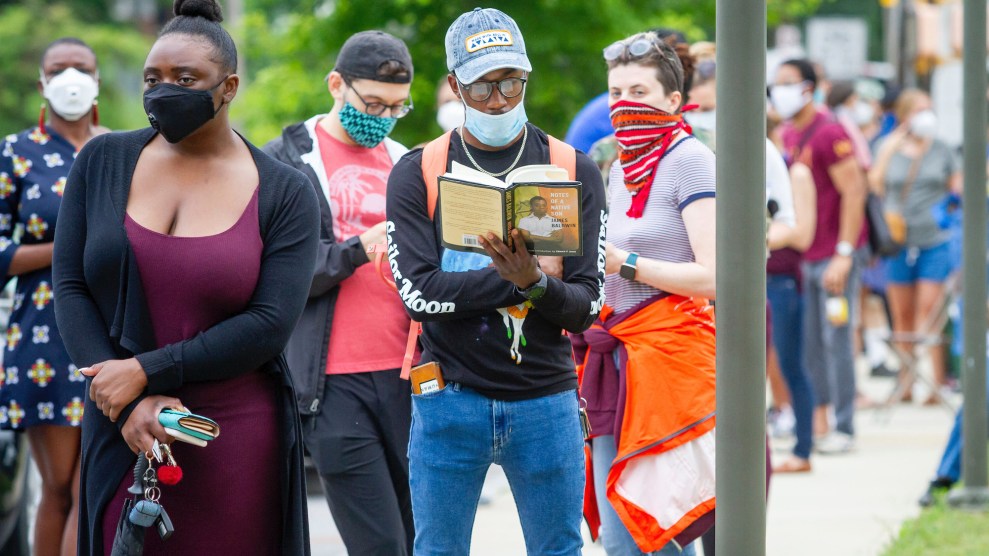 Voters wait in a line that stretched around Atlanta's Metropolitan Library on Tuesday.Steve Schaefer/AP

If Georgia’s primaries on Tuesday are a preview of what COVID-era swing-state elections could look like in November, we’re in for a lot of problems.

“This election has been a catastrophe,” Kristen Clarke, president of the National Lawyers’ Committee for Civil Rights Under Law, told reporters. “If we view the primary election as a dry run for November, then Georgia gets an F today.”

Voters in and around Atlanta reported standing in line for hours as machines malfunctioned and precincts ran out of backup ballots during Tuesday’s primary. Clarke said many people were forced to go to the polls because they had not received the absentee ballots they requested.

“This is ridiculous,” says Anita Heard, a 80-year-old who was first in line to vote at 6 this morning and is still waiting to cast her ballot. “Of course,” she says when I ask her if she plans to stay. “I worked for 40 years — where else am I going?” #gapol pic.twitter.com/4Cd8nwagG9

“Everything that could happen or go wrong has gone wrong so far,” Robb Pitts, the chair of the board of commissioners in Atlanta’s Fulton County, told the Atlanta Journal-Constitution. The problems, Pitts said, stemmed from a perfect storm surrounding the elections: the pandemic, nationwide protests against police brutality, fewer precincts being open, and problems with absentee ballots.

Republican Secretary of State Brad Raffensperger has tried to place the blame on county officials, and he announced that he’ll be launching an investigation. County officials have pushed back. DeKalb County Commissioner Steve Bradshaw said of Raffensperger, “I was raised that if you mess up, fess up.”

Georgia’s elections this year have high stakes, given that the state could be in play this fall in both presidential and Senate races. Among other offices, Democratic voters in Tuesday’s primary are picking their party’s challenger to Republican Sen. David Perdue. Jon Ossoff, who lost a highly publicized runoff election for the House in 2017, is the favorite to win. He reported waiting more than three hours to vote on Tuesday. State Sen. Nikema Williams waited for more than five hours, according to the New York Times.

Georgia had already delayed its March primary so that it could prepare to hold an election in the midst of a pandemic. It faced similar criticism of its voting procedures during the 2018 midterm election. As Mother Jones’ Ari Berman wrote at the time:

Thousands of Georgians had their registrations put on hold and weren’t sure if they’d be able to vote. Some voters were wrongly flagged as non-citizens; others had their ballots rejected because poll workers told them they had the wrong ID. Hundreds of polling places were shuttered before the election, and other precincts had four-hour lines. Absentee ballots were rejected because of signature mismatches or other minor errors. One Abrams adviser described it as “death by a thousand paper cuts.”

Earlier in the day, the Journal-Constitution reported that the voting process was so dysfunctional that people feared their votes wouldn’t be counted. “I just don’t want my ballot to end up in a dumpster,” said a voter outside Atlanta who had been waiting for more than 90 minutes. “We are all concerned.”