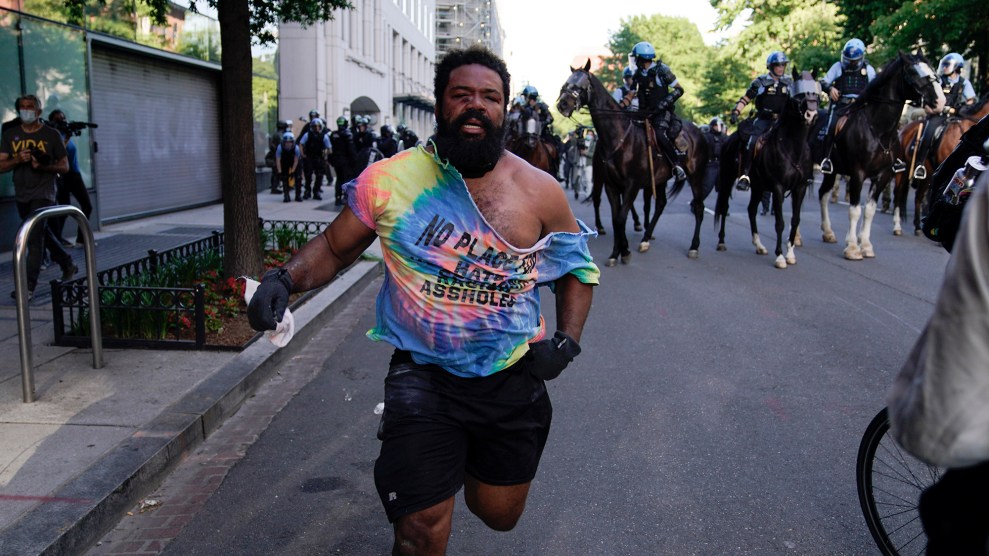 A demonstrator and others who gathered to protest the death of George Floyd, Monday, June 1, 2020, move away from police officers on horses near the White House in Washington. Floyd died after being restrained by Minneapolis police officers. Evan Vucci/AP

Here's the moment where police fired teargas into a crowd of peaceful protesters in Lafayette Park, just minutes before Trump's address in the Rose Garden. pic.twitter.com/KPjxMKdDyx

“I have strongly recommended to every governor to deploy the National Guard in sufficient numbers that we dominate the streets,” Trump said in his address from the White House Rose Garden. “Mayors and governors must establish an overwhelming law enforcement presence until the violence has been quelled. If a city or state refuses to take the actions that are necessary to defend the life and property of their residents, then I will deploy the United States military and quickly solve the problem for them.”

Trump called the violent protests “domestic acts of terror” and highlighted “law and order,” promising to use all federal resources in his power to protect “the rights of law-abiding Americans, including your Second Amendment rights.”

When Trump arrived at the church, he held up the Bible awkwardly at different angles, posing for the cameras. Asked if it was his Bible, he responded, “It’s a Bible.”