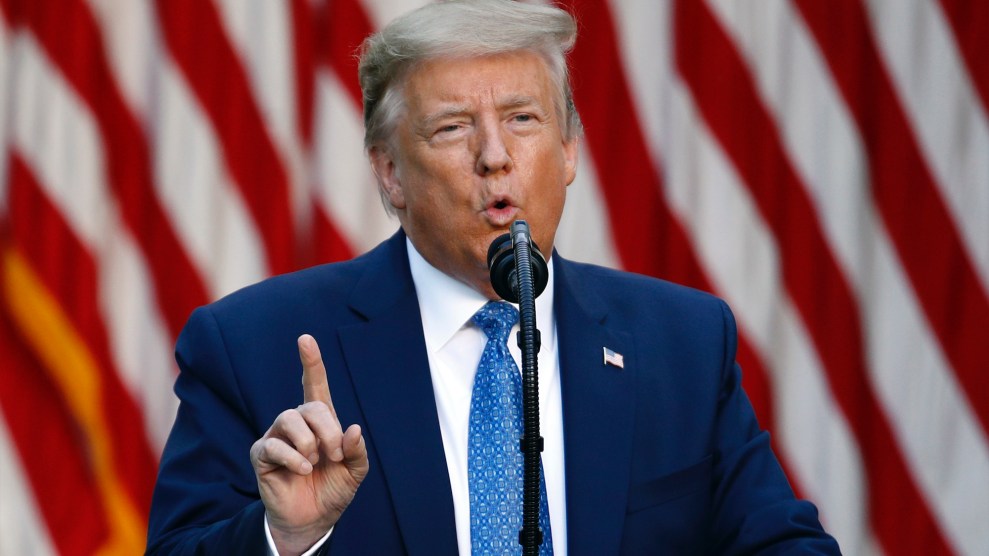 President Donald Trump took a swing at the protesters who have been outside the White House on Saturday morning, calling them “ANTIFA & other Wacko groups of Anarchists” as he explained why the military presence he’s ordered to control demonstrations in DC this week doesn’t apply to his own crowds of supporters.

His comments come on the heels of a visit to Guilford, Maine, where the president visited a medical manufacturing plant on Friday. YouTube personality Lily Marston tweeted a video of supporters lining the streets to welcome Trump’s arrival and noted the “lack of riot gear or military control to ensure the protection and safety of this very large crowd”—a tongue-in-cheek clapback to military enforcements present at the massive protests in Washington, DC, against the police killing of George Floyd and Trump’s race-baiting behavior and attitudes toward Black Americans.

Trump shared Marston’s tweet to explain that “Riot gear or military control is not necessary because ANTIFA & other Wacko groups of Anarchists aren’t present to cause trouble,” Trump wrote. He called his own throngs of fans “incredible people.”

Riot gear or military control is not necessary because ANTIFA & other Wacko groups of Anarchists aren’t present to cause trouble. Incredible people. Thank you Maine! https://t.co/KGOcoQORMg

Trump has been referring to the protesters as “antifa,” short for “antifascist.” People who affiliate with the label sometimes use violence to oppose fascism. After Trump ordered the National Guard to Minneapolis to break up protests on May 31, Trump congratulated the troops for shutting down the “ANTIFA led anarchists.” On Wednesday, Trump referred to the protesters as “killers, terrorists, arsonists, anarchists, thugs, hoodlums, looters, ANTIFA & others.” The demonstrations have been largely peaceful, and there is no evidence to suggest antifa has played any major role in them.

Even so, Trump has ordered a hefty military presence as huge crowds continue to gather outside the White House. Their clashes became violent on Monday* when the president ordered federal police to spray tear gas and fire rubber bullets at a crowd so he could walk to St. John’s Episcopal Church and take a photograph with a Bible.

*Correction: An original version of this post stated the photo op was on Tuesday, not Monday.