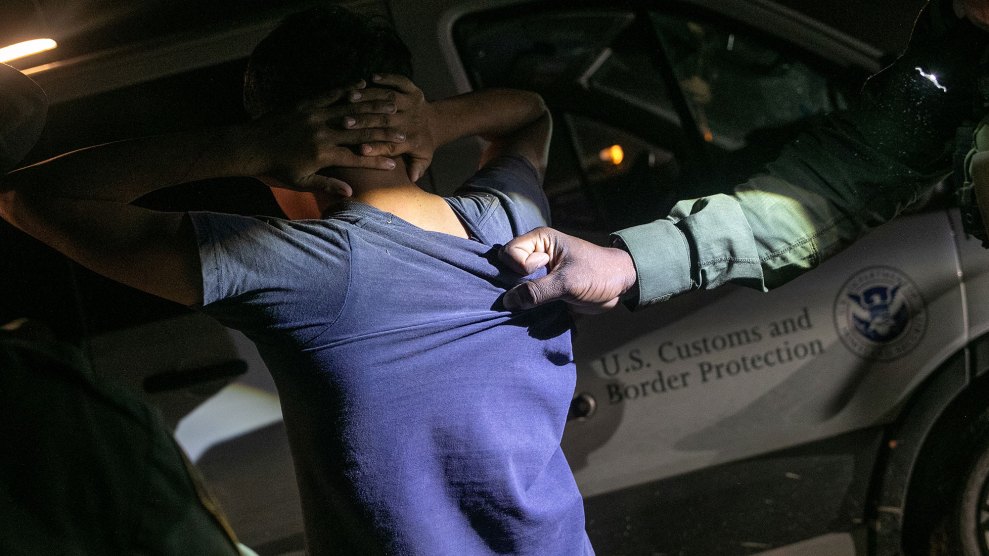 Over the past week, hundreds of federal law enforcement officers descended upon the police-reform protests in Portland, beating demonstrators with batons, pepper-spraying them, shooting nonlethal bullets at them, and even dragging them into unmarked vans. As my colleagues have reported, the undertrained and sometimes unidentified agents came from several branches of the Department of Homeland Security.

While DHS has not provided a breakdown of how each of its agencies is represented on the ground, the feds say a June 26 executive order signed by President Trump to “protect American monuments” and “combat recent criminal violence” gives them the authority to do as they please in America’s cities—even if mayors or governors don’t want them there.

That’s particularly concerning given the involvement of the largest—and in many ways least accountable—law enforcement agency in the country: the US Border Patrol.

According to Andrea R. Flores, the deputy director of immigration policy at the American Civil Liberties Union, the Border Patrol’s 20,000 agents have “a long and troubling history of acting with impunity” in its expansive jurisdiction, which extends 100 miles from any land or sea border. They often work in remote areas, alone and without body cameras, tracking drug smugglers and dealing with an incredibly vulnerable group of people that the agency still refers to as “aliens.”

While there are abuses at all levels of law enforcement, an internal investigation at DHS found in 2015 that “arrests for corruption of CBP personnel far exceed, on a per capita basis, such arrests at other federal law enforcement agencies.”

Border Patrol agents have been arrested for corruption, aggravated assault, domestic violence, sexual assault, and sex crimes against children, among a long list of offenses included in a 2018 CBP discipline analysis report. In one extreme case from 2014, a Border Patrol agent kidnapped and raped two Honduran girls and their mother.

Border Patrol agents have been arrested for corruption, aggravated assault, domestic violence, sexual assault, and sex crimes against children, among a long list of offenses included in a 2018 CBP discipline report.

Agents have run over migrants with their vehicles, fired at them as they’ve run away, and even shot into Mexico; in 2012, for example, 16-year-old Jose Antonio Elena Rodriguez was killed on a sidewalk in his hometown of Nogales, Mexico, by a Border Patrol agent who fired multiple times from the US side of the border fence. (The ACLU’s Flores notes that since 2010, Border Patrol agents have killed six people, including three children, by shooting across the border into Mexico. At least 102 people have died as a result of encounters with Border Patrol in the last decade, she said.)

Unlike local law enforcement agencies, Border Patrol gives agents more freedom to engage in high-speed chases in border cities, and over the last decade that has resulted in countless fatal high-speed chases. On June 25, a chase in El Paso ended in the deadliest crash in the city’s history. A witness told El Paso Matters that he saw an agent asking a survivor about his immigration status in the middle of the fatal scene.

Agents have also been known to make racist, sexist, and violent remarks about the people they apprehend. Last year, ProPublica uncovered a secret Facebook group of about 9,500 current and former Border Patrol agents who joked about migrant deaths and posted sexually explicit memes of Latina members of Congress. (On Monday, the House Committee on Oversight and Reform released a new document outlining how CBP negotiated a “last chance” deal to reduce the punishment of an employee who engaged in misconduct in the secret Facebook group.) And last year I wrote about two former agents who were selling T-shirts emblazoned with a common Border Patrol slur for immigrants—one that refers to the sound of a flashlight hitting a migrant in the head.

Beyond that, there’s the litany of downright cruel incidents reported over the years. Like when Border Patrol agents forced a group of migrants who were smuggling marijuana to take off their clothes and eat the contraband in front of them. Or the agent who in 2018 made fun of wailing children in a Border Patrol holding cell, telling them to stop crying after they had been separated from their parents.

An internal investigation by DHS found that “arrests for corruption of CBP personnel far exceed, on a per capita basis, such arrests at other federal law enforcement agencies.”

The ACLU has filed numerous lawsuits against the agency over the years, and last week it sued to get federal law enforcement to stop assaulting peaceful observers and journalists. “These immigration enforcement agencies lack the proper training to respond to peaceful protests,” Flores said, referring also to Immigration and Customs Enforcement. “Congress should immediately investigate the authorities under which these federal agents have been deployed and divest funding from DHS for these operations that prioritize the protection of property over people.”

In some ways, the Border Patrol’s deployment in Portland, which a Customs and Border Protection spokesperson confirmed to me via email, is the next step in an increasingly close relationship with the White House. That tight bond was first cemented in 2016, when the Border Patrol union endorsed Trump, the first time it had ever backed a presidential candidate. The union said it wanted a candidate “who is pro-military and values law enforcement, and who is angry for America and NOT subservient to the interests of other nations.”

With Trump, agents reasoned, they would be able to remove the shackles placed on them during eight years of the Obama presidency. Art del Cueto, vice president of the Border Patrol union, told me something along those lines in early 2017: He said there was an overall sense of relief for agents once Trump took office—that they could finally do their jobs. “When you’re putting your life on the line every day [and] you just didn’t see much backing for DC at the time, it’s upsetting—it knocks down your morale,” he said. “Border Patrol agents work in the roughest terrain, assaulted more than anyone else, and it’s a very difficult job”

The Border Patrol union endorsed Trump in 2016, saying it wanted a candidate “who is pro-military and values law enforcement, and who is angry for America and NOT subservient to the interests of other nations.”

For his part, Trump has gone out of his way to praise Border Patrol agents as “incredible heroes” and “incredible patriots” during his time in office. Five days after his inauguration, he even called for hiring an extra 5,000 Border Patrol agents as part of his border lockdown, but in the end the agency couldn’t fill that mandate—leading CBP to remove some recruitment requirements and speed up the hiring process to try to hire more agents. Even then, the agency struggled to find as many agents as Trump wanted.

For Jenn Budd, a former Border Patrol agent turned migrant-aid volunteer and a frequent critic of the agency, the situation in Portland has brought into sharp relief the myriad problems that have plagued the agency for decades. In a blog post on Sunday, Budd wrote:

You need to remember that these border agents were willing to ban all Muslims even though that is illegal. They were willing to separate families of asylum seekers, even though that is illegal. They were willing to hold those families in their processing cells, in the same clothes for weeks, eating rotten food, with forty people to one toilet, while children died of dehydration and flu in their custody. These agents work in a limited Constitutional rights arena. They are not accustomed to enforcing laws on Americans with Constitutional rights. They are not peace officers, and they are our nation’s most violent federal law enforcement agents.

According to Trump’s Monday press conference, Border Patrol and other DHS agents could soon be heading to cities across the country—New York City, Chicago, Baltimore, and Oakland among them. “This is who Trump has unleashed against Americans,” Budd wrote. “They will follow him to the end, and obey all his illegal orders.”