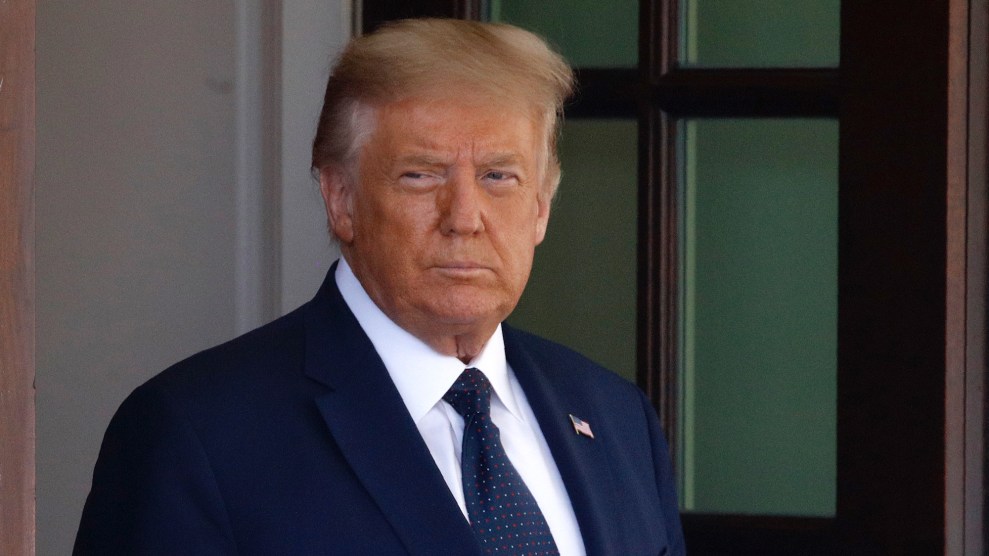 The Supreme Court ruled on Thursday that President Donald Trump can’t block investigations into his finances and taxes just because he’s the president—but allowed him to continue fighting specific investigations in lower courts, meaning he can continue to put off any immediate chance of having to give up bank and tax records, probably until after this November’s election.

Turns out, Trump is already kicking the can on another important bit of financial transparency: his annual personal financial disclosure. The disclosure is not nearly as revealing as bank and tax records, but details his assets, debts, and income. Trump has asked for unprecedented extensions twice this year.

The reports, which are required of all federal officials, would ordinarily have been due on May 15. But the Office of Government Ethics, which collects, reviews and approves the reports, granted a blanket 45-day extension to filers due to the COVID-19 pandemic. That extension expired on June 29, and Vice President Mike Pence’s personal financial disclosure was promptly filed the next day—but no sign of Trump’s. A White House official confirmed that a second 45-day extension was granted, as first reported by the New York Times, and said Trump asked for the extension because he “has a complicated report and he’s been focused on addressing the coronavirus crisis and other matters. As a result he’s been given an additional 45 days, but the President intends to file as soon as possible.”

Despite the assurances that he plans to file “as soon as possible”, the mere fact that he has asked for an extension is a red flag, says former OGE director Don Fox. In fact, Fox says, it was shocking that Trump would take one extension.

“It’s really unprecedented, I don’t know of any president who has asked for an extension,” he says, and questions the claim that the COVID-19 crisis would get in the way of filing. “Even in the last two administrations, God knows that Bush and President Obama all had crises they had to deal with—and significant crises—and somehow they got the paperwork done on time.”

Fox also said that given the sophistication of Trump’s personal finances—not to mention his day job as president—it’s extremely unlikely Trump has much of anything to do with actually filling out and filing the forms.

The personal financial disclosures are not quite as revealing as a tax return, or the type of documents Trump would’ve submitted to his bankers to obtain loans, but they do provide a remarkably clear picture of the president’s finances. He has hundreds of LLCs, more than a dozen debts and hundreds of millions of dollars of income. Trump has touted his filings, which run over 100 pages, as proof of what a stellar business he has maintained while in office. But the filings notably do not show his profits.

Still, in the last few years they have been revealing enough to show that revenues at some of his most prized properties have been dwindling. On last year’s form, Trump had to reveal that he had closed his brokerage accounts with Deutsche Bank and had borrowed money from a small Florida bank to cover the purchase of his sister’s house next to the Mar-a-Lago resort. One of the biggest mysteries of Trump’s finances is the murkiness surrounding a loan he claims to have purchased off of creditors. His disclosure forms have consistently included the loan, but it does not seem to be real.

What the documents don’t say has also been a source of legal and ethical quandaries for the president. For example, in 2017 he failed to report the full extent of his payments to Michael Cohen as part of the Stormy Daniels hush money payment scheme, drawing legal complaints from ethics watchdogs. And in 2018, Trump failed to note the legal advice that Rudy Giuliani provided to him gratis.

In previous years, Trump’s disclosures have been filed promptly and released quickly, and while more extensive than most federal officials’ disclosures, they haven’t changed dramatically from year to year, which makes the White House’s claim that he has needed more time this year even more odd. Kathleen Clark, a law professor at Washington University in St. Louis who specializes in government ethics, says that the past failures to disclose things like the Cohen payments or Giuliani’s “gift” might be part of the reason for Trump’s tardy filing this year.

“Basically the question isn’t just whether Trump is going to lie on his financial disclosure, he’s done that twice already,” she says. “It’s whether OGE is going to sign off on his forms.”

Both Clark and Fox say that before a form is actually filed, there is usually an extensive back-and-forth between OGE and the president hammering out any questions about the form. Perhaps OGE is the source of delay, Clark says.

“The problem might be that OGE is maybe questioning and looking for verification since Trump’s past disclosures have included false information,” she says.

Fox says he is concerned the delay is a result of Trump’s recalcitrance to reveal information about his finances. The maximum amount of time a filing can be delayed is 90 days—this year it will be Aug. 13—and if Trump simply doesn’t file by then, it will create a crisis.

“What happens if he gets to the end of 90 days and he just says, ‘Well I’m still too busy,'” Fox says. “We’ve just never been there. At that point, it’s just a flagrant disregard for the law and the standards and it really puts the OGE into a terrible position.”

OGE doesn’t have any discretion to grant more time, after that, Fox says. The only option is to refer the matter to the Attorney General where it could be considered for a civil action resulting in as much as a $50,000 penalty for failing to file.

“And we know that’s not going to happen,” Fox says.