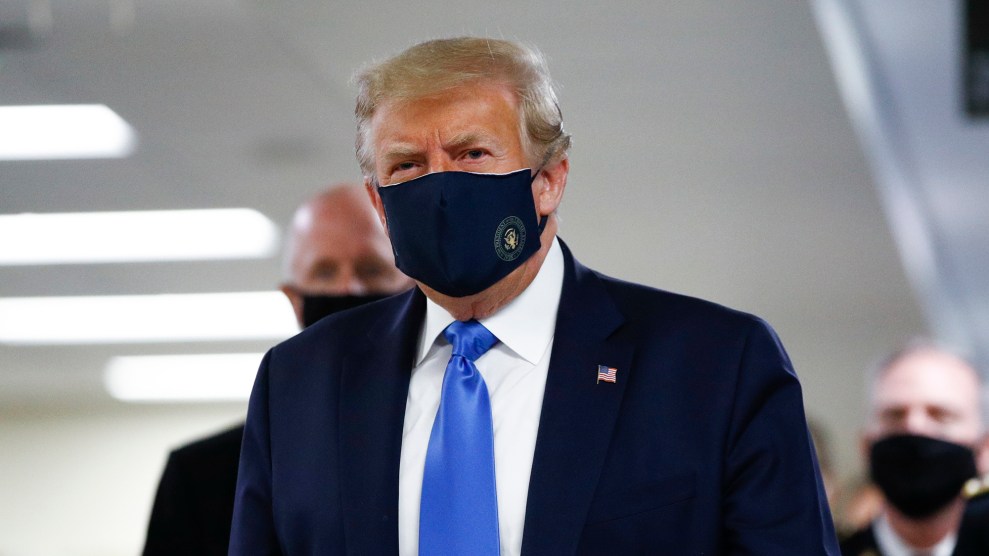 President Donald Trump wears a mask as he walks down the hallway during his visit to Walter Reed National Military Medical Center in Bethesda, Md., Saturday, July 11, 2020. (AP Photo/Patrick Semansky)

“They said this day would never come”—Barack Obama once said that, referring to his historic victory in the 2008 Iowa caucuses. But I also said it—aloud to myself, when I saw this photo of President Donald Trump wearing a mask on a visit to Walter Reed Army Medical Center on Saturday:

After months of refusing to wear one publicly, President Trump wears a mask at Walter Reed. pic.twitter.com/QB62XS4q9x

For months, the Centers for Disease Control and Prevention and state and local governing bodies have advised Americans to wear masks indoors and in situations where social distancing is impossible, in order to slow the spread of Coronavirus. But Trump has made a point of not wearing one (and of not social-distancing, for that matter). Unlike you, he gets tested regularly, as do those around him, but—like Gerald Ford getting his flu shot—it’s the symbolism that matters as much as anything.

One might think wearing a mask in front of photographers for the first time in July would be a source of tremendous embarrassment, like realizing 40 minutes into your commute that you are not wearing pants. CNN reported that Trump’s aides had spent months trying to convince him to wear a mask. But when the first images dropped, Trump’s campaign orbit was on-message: He looks totally badass. And also: the presidential election is now over.

This is like putting up a huge sign on the White House lawn that says “Days Without an Accident: 1.” Congrats to the Big Boy president! The president’s most loyal supporters are treating “the president following his government’s own guidelines on the plague” like proud parents of a toddler who just cursed for the first time. This is the sort of positive reinforcement people use on dogs. There might well be some truth to the idea that Trump wearing a mask four months into a pandemic that has killed nearly 140,000 Americans will effectively settle the election. But it might not be the outcome they want.