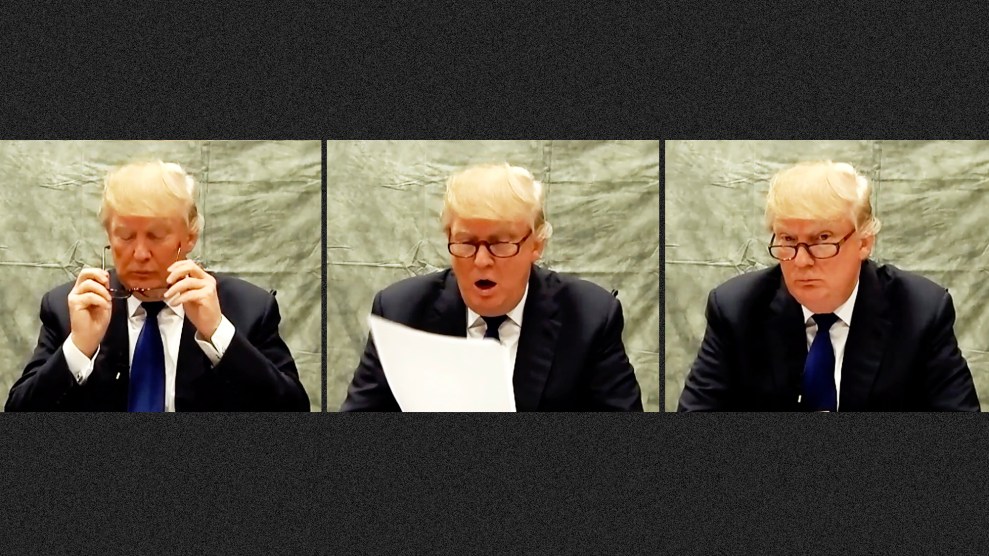 During the 2016 campaign, Donald Trump was burdened with lawsuits that accused him and his Trump University of defrauding students who had paid thousands of dollars to learn the supposed secrets of Trump’s financial success. Though the Trump U controversy raised questions about Trump’s fitness for office, he managed to score two legal victories in the case as it proceeded. He won a postponement in the trial until after Election Day, and he managed to seal the video of a six-hour deposition he gave in the case. That meant voters would not see news reports of Trump on the stand in a federal civil fraud case or be able to watch this footage of Trump being questioned concerning allegations of fraud. But Mother Jones has now obtained the full video of Trump’s deposition, and though the written transcript of the session was released in June 2016, the video version includes several exchanges that likely would not have played well for Trump had they become public when he was chasing votes.

Trump sat for this deposition in Trump Tower on December 10, 2015. The video shows him parrying with the lawyer for the plaintiffs, Jason Forge, over various issues, including false statements made by Trump University employees, and Trump’s own memory. Trump at one point griped, “It’s the most ridiculous lawsuit I’ve ever seen.” He claimed not to remember having boasted that he possessed one of the best memories in the world and repeatedly said he could not recall matters related to the case. He downplayed false and misleading statements presented by Trump University instructors as merely “hyperbole,” refusing to label them “false.” He even disavowed a passage from one of his own books in which he had assailed educational institutions for committing “fraud.” Had the video deposition been released during the campaign, it may have yielded ammo for anti-Trump ads. At the start of the deposition, Trump’s attorney, Daniel Petrocelli, said he and Trump did not want the transcript “getting into the hands of the media.” Regarding the video, they succeeded.

Mother Jones was provided the video by a source who asked not to be identified. Art Cohen, a lead plaintiff in one of the lawsuits against Trump University and Trump, confirmed that this was the actual video of the deposition. “On this video, Trump’s shifty memory and dishonest character are exposed when he is faced with questions that demand the truth,” Cohen says. (Last month, Mother Jones posted video of a conversation that occurred during a break in these proceedings between Trump and Petrocelli, in which Trump boasted of threatening the Better Business Bureau to change the D grade it awarded Trump University to an A.)

Trump’s Memory: Best in the World?

When the written transcript of the deposition video was made public, media attention focused on an exchange about Trump’s memory. Forge had asked him to evaluate his own memory, and Trump said, “My memory’s good.” Forge reminded Trump that he had once described it as “one of the all-time great memories,” and Trump kept calling it “good” before acknowledging he had used that phrase. When Forge asked, “Do you believe you have one of the best memories in the world?” Trump replied, “That I can’t tell you.” Forge noted that Trump had previously stated he indeed possessed one of the best memories in the world and referenced an NBC News report from the previous month in which Trump had declared he had “the world’s greatest memory.” Trump said, “I don’t remember that.” Here it is:

Trump downplaying his powers of recall—or no longer bragging that he had the greatest memory in the world—was an important moment during this deposition because he frequently maintained throughout this session that he could not remember details about Trump University, citing the passage of time. In one stretch, Forge presented Trump with a list of names that included Trump University instructors—in promoting this endeavor Trump had vouched for the instructors and said they were “handpicked by me”—and Trump didn’t remember the instructors, saying repeatedly, “Too many years.”

Trump did insist that Trump University had “a lot of very good instructors.” Yet he couldn’t identify a single one.

When Forge asked Trump whether he had any direct personal knowledge that the instructors at Trump University were “good,” Trump responded with a common Trumpism: “I’ve heard good things.”

One line of questioning seemed to particularly annoy Trump. Forge cited Trump’s previous praise of Hillary Clinton, Jeb Bush, Rick Perry, and George Pataki—politicians he now was deriding, as he campaigned against them. The lawyer pointed out that when Trump was queried about this in a recent interview he had explained that he had previously made positive comments about particular politicians because “I needed their support to get projects done.” Forge asked Trump if that was “an accurate explanation for why you had said nice things about these folks in the past and now are expressing different views.” The lawyer seemed to be suggesting that Trump said whatever was necessary—true or not—for the sake of making a buck. Trump adamantly refused to answer this query, pointing out that “politics” was different from “business.”

Next, Forge tried to trap Trump with Trump’s own words. He cited a book Trump had written in which Trump declared, “The education industry is delivering less for more money and claiming no ground has been lost. It’s fraud, pure and simple.” Forge asked Trump, “Would you agree that when educators deliver less than promised for more money and claim they’re doing something great, it’s a fraud, pure and simple?” Trump, who now stood accused of committing fraud, apparently could see where this was heading. After his lawyer objected to the question, Trump said, “I would say it’s…no, it’s not a fraud.” Forge countered: “So this statement in your book is not accurate?” Trump replied, “It’s not accurate, yes. It’s trying to get a point across.” Trump was disavowing his own past statement and now refusing to describe overpromising and underdelivering by an educational organization as “fraud.”

In several instances during the deposition, Trump dismissed false statements made by Trump University instructors. Asked by Forge about a script that had been sent to instructors advising them to tell prospective students that they had dinner with Trump and discussed real estate with him—though the instructors had not dined or chatted with him—Trump called this “hyperbole” and “innocent exaggeration.” Pressed on whether terming this statement “hyperbole” was the “same thing as saying something is not accurate,” Trump answered, “It depends on how you’re talking about ‘accurate.’ But I would say that a thing like that’s pretty innocent. I can see a lot of people doing it.” That is, Trump would not call a lie a lie.

In a similar vein, Trump was asked about a Trump University instructor who had been told to say—falsely—that Trump had “personally picked” him for the position. Trump conceded that he had not selected this instructor, but he refused to acknowledge that this instructor had made a false statement. Trump repeatedly said that the person he had chosen to run Trump University, Michael Sexton, had hired this instructor: “I guess [the instructor is] saying I picked him through my representative.” He added, “A lot of people would consider that to be an offshoot of me.” He was apparently justifying another lie.

During one exchange, Trump asserted that he did “very well” in another lawsuit—though he had actually lost. Trump had sued journalist Tim O’Brien for libel after O’Brien wrote in his 2005 book, TrumpNation: The Art of Being the Donald, that Trump was no billionaire and, instead, worth between $150 million and $250 million. Trump at the time claimed that he was worth over $5 billion. A New Jersey judge dismissed the case in 2009, and two years later Trump lost an appeal. Yet when Forge questioned Trump about this case, the reality TV star claimed he had done “well” in it. Reminded that he had not won, Trump replied, “I made a very good point with that lawsuit.” He maintained that the issue had been a question of damages. But that was not true. The case had been thrown out by a state judge who rejected Trump’s claim that O’Brien had acted maliciously. The case had won Trump nothing. In depositions for that lawsuit, Trump was forced to admit 30 times that he had lied about assorted matters.

This video deposition depicts Trump contending that Trump University—which was forced by New York State regulators to drop the word “university” from its name—was an outstanding venture and saying he couldn’t wait to see his accusers in court. At one moment during a break, he perked up when told he would only need one juror out of a jury of six to win the case. “I like those odds,” he said with a grin. Yet after the election, Trump, who had vowed never to settle the Trump University lawsuits, did just that. He agreed to pay $25 million, without acknowledging any wrongdoing, and avoided a trial. This video suggests he might not have made a very good witness for himself.