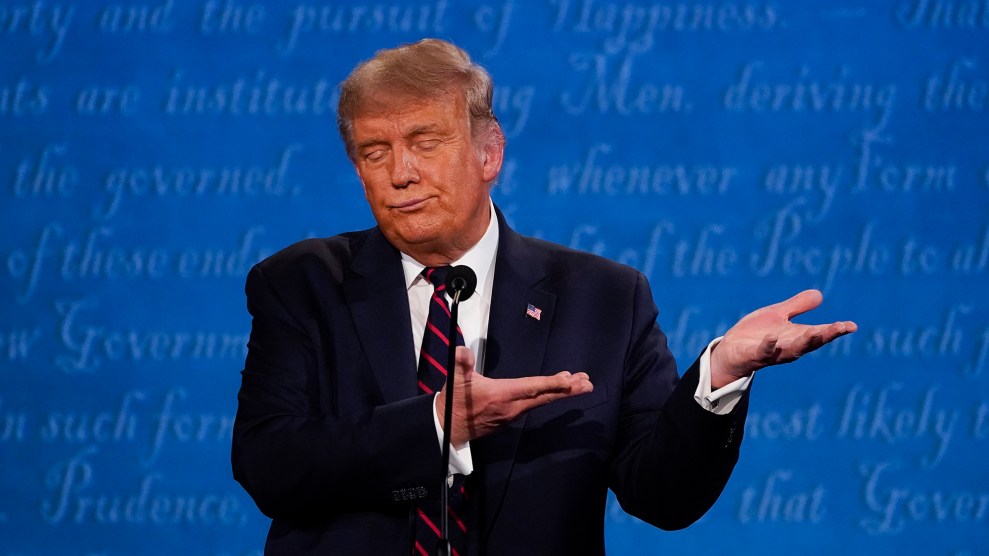 There was a key moment that you might have missed in Tuesday’s presidential debate. It happened early on, before President Trump told a neofascist militia to “stand by,” invented an endorsement from an Oregon sheriff, and trampled on the memory of Joe Biden’s dead son. Trump, after being criticized by Biden for his ongoing efforts to blow up the Affordable Care Act, tried to change the subject by talking about all the work he’s doing to bring down the cost of prescription drugs.

“I’ll give you an example,” Trump said. “Insulin—it was destroying families, destroying people, the cost. I’m getting it for so cheap it’s like water, you want to know the truth. So cheap.”

I did a double take when I heard this, because insulin is expensive as hell, and no, the president hasn’t fixed that. How expensive? “In reality, insulin still retails for roughly $300 a vial,” wrote Nicholas Florko at Stat News. “Most patients with diabetes need two to three vials per month, and some can require much more.”

When I sent a tweet about this, I was flooded with responses from people sharing their own stories of how much they pay for insulin and other diabetes medication, sometimes attaching literal receipts. People pay more just to stay alive than the president paid in taxes in 2017:

With insurance, I had to pay $600 for a vial. I had to switch to Walmart brand insulin and even then, it's WAY more expensive than water.

My 14 year old daughter has had T1 since she was 2. This is what it costs to keep her alive for one month pic.twitter.com/kBoiEdxpJS

I buy insulin for two people in my family. $2,500 per quarter. At some point insurance kicks in but I hit $11,500 max OOP about 8 months into my year. And I have pretty good corporate insurance

The sticker price for a three-month supply of the insulin I take is over $7500. That has not changed under Trump. pic.twitter.com/dpmrSsmYxq

I'm still laughing over that one. I pay $2.99 for a case of water and my insulin pens cost $500 dollars a month and that's just for mine my husband has his insulin also costs as much as mine.

The cost of insulin, which people with type-1 diabetes need to inject regularly, tripled between 2009 and 2017 because of predatory pricing decisions by drug companies. That had terrible health and financial consequences on the people who rely on the medication to live. A study last year found that a full quarter of type-1 diabetes patients were rationing their insulin because they couldn’t afford it. What made the price-gouging all the more glaring was the origin story of the medication; its inventors famously refused to even put their names on it, believing that it belonged to the whole world and should be, well, almost as cheap as water.

Trump, Wallace noted in his preceding question, has “never come up with a comprehensive plan to replace Obamacare” despite years of promising to improve the American health care system. Instead he has issued a stream of executive orders designed to give the appearance of tackling problems like prescription drug prices—most notably, insulin.

The administration made headlines in March when it announced plans to cap the monthly cost of insulin at $35 for seniors—but as Stat News noted, that discount (which is hardly as cheap as water) was limited to “a fraction of seniors enrolled in certain pricey private insurance plans.” And it would have no impact on the young people without insurance who had turned to rationing.

Likewise, when Trump signed four executive orders on prescription drug prices in July, which he said would lower the cost of insulin from “big dollars to virtual pennies,” the Washington Post reported that it was mostly posturing:

However, the moves are largely symbolic because the orders are unlikely to take effect anytime soon, if they do so at all, because the power to implement drug pricing policy through executive order is limited. Voters will not see an impact before the November elections, and the drug industry is sure to challenge them in court.

And an analysis from the independent fact-checking site PolitiFact rated the president’s claim that insulin costs had been seriously cut “mostly false,” and emphasized just how limited his purportedly sweeping reforms were. “A recent executive order on insulin would touch fewer than 20% of clinics through a program that provides 10% or less of all prescription drugs.”

In practice, according to Kaiser Health News, the executive orders he’s signed are “far from being implemented” and are not likely to “pass along drug-pricing discounts to a majority of Americans.”

To the extent that insulin costs have gone down in recent months for a lot of people, it’s because companies simply decided to lower them during the pandemic—a good public relations move, but not a substitute for long-term policy.

Trump, who also boasted about lowering drug prices during his Republican National Convention speech, seems like he’s sticking to this talking point. But for everything else that happened on Tuesday, this might be the kind of subtle moment that voters remember—Biden or outside groups might remind them—because the people Trump is messaging to are the ones best equipped to call his bluff. You can get away with lying about things that are abstract. Declare often enough that antifa is invading the suburbs and people might believe it. Spin enough stories about ballots ending up in rivers (what was that, anyway?) and a kernel of doubt might form. But it’s another thing to lie about something so intrinsic to people’s lives—a medication that people pay for every month so they don’t die. Either you’ve delivered insulin for “virtual pennies” or you haven’t.