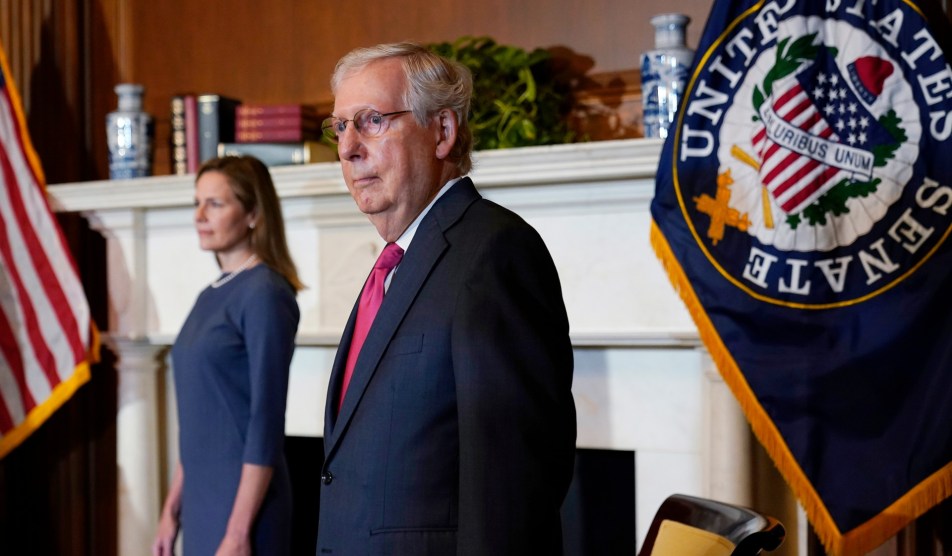 After a week of maskless gatherings in Washington, three Republican senators have announced that they, like the president and a swath of his inner circle, have tested positive for COVID-19. Two of them—Sens. Mike Lee (R-Utah) and Thom Tillis (R-N.C.)—serve on the Senate Judiciary Committee. The alarming rate of new infections and the potential for widespread exposure among their Senate colleagues pushed majority leader Mitch McConnell (R-Ky.) to suspend all Senate floor proceedings until October 19. The two week hiatus meets the Centers for Disease Control’s recommended 10-day isolation period for people exposed to the virus.

But these developments will not stop Senate Republicans in their rush to confirm Amy Coney Barrett to the Supreme Court.

On Saturday, McConnell explained that the Senate’s retreat would have no bearing on his party’s plan to expedite Barrett’s confirmation. The Judiciary Committee hearing on Barrett’s nomination, scheduled by Senate Judiciary chairman Sen. Lindsay Graham (R-S.C.) for October 12 in advance of a committee vote on October 22, will proceed as planned.

“The Senate’s floor schedule will not interrupt the thorough, fair, and historically supported confirmation process previously laid out by Chairman Graham.”

“The Senate’s floor schedule will not interrupt the thorough, fair, and historically supported confirmation process previously laid out by Chairman Graham,” McConnell said, adding that the Judiciary Committee “has operated flawlessly through a hybrid method that has seen some senators appear physically at its hearings while other members have participated virtually.”

Democrats on the committee disagreed. Sen. Diane Feinstein (D-Calif.), the leading Democrat on the committee, released a statement on Friday calling Graham’s decision “premature” when “we do not know the full extent of potential exposure,” adding that virtual hearings for “a lifetime appointment to the federal bench is not an acceptable substitute.”

All Democratic members of the Judiciary Committee reiterated those points on Saturday afternoon in a letter to Sen. Graham. “As Republican members of this Committee have recognized, questioning nominees by video is ineffective and ignores the gravity of our constitutional duty to provide advice and consent on lifetime appointments, particularly those to the nation’s highest court,” the letter said.

Though the Senate has conducted some of its business remotely since the pandemic took root in March, the two judicial nominees it has confirmed over the last six months have had their committee hearings and votes conducted in person. In fact, the Senate first returned from the extended recess it took at the beginning of the pandemic at the insistence of Senate Republicans eager to push through the nomination of Judge Justin Walker to the U.S. Court of Appeals in Washington. Democrats are now crying foul at the decision to conduct judicial nominations remotely, after Republicans insisted on in-person hearings earlier this year. So far, the Senate has not confirmed any nominations or advanced legislation out of committee over Zoom.

So what could Senate Democrats do to stop Graham from moving forward? According to Senate Judiciary rules, the presence of nine committee members—including at least two from the the minority party—is required for transacting business, such as judicial confirmation proceedings. If all Democratic members of the committee refuse to attend, a quorum wouldn’t be present. But there are “too many intangibles” in this unprecedented moment to say whether Graham might proceed without Democrats present, says Jim Manley, an aide to former Senate majority leader Harry Reid (D-Nev.) and an expert in Senate procedure. “It all depends,” Manley says, “on how much Graham is willing to bend the rules of the committee.”