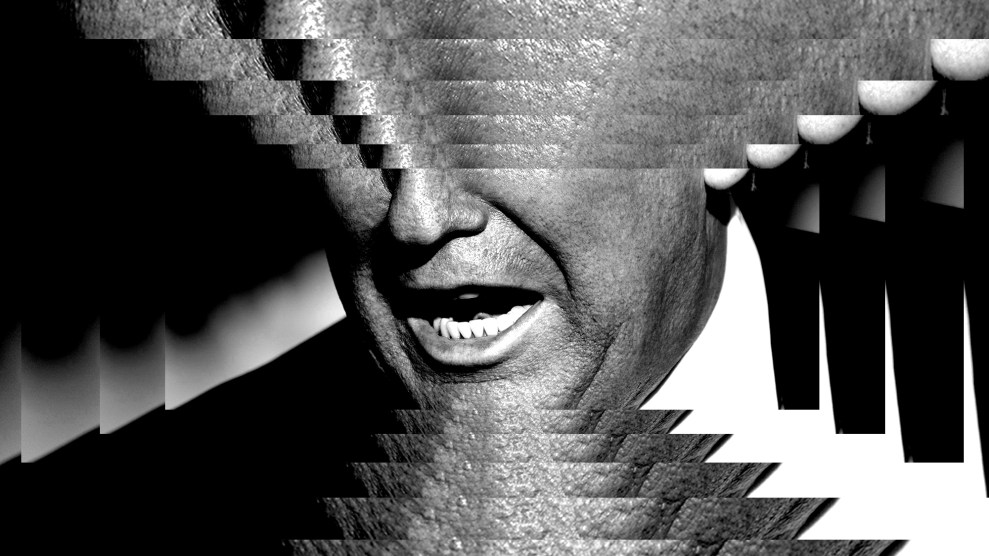 If you’ve had any conversations about politics lately, you’ve probably heard the sentiment or even expressed it yourself: “I’m exhausted.” It has become a common response to the relentless chaos, falsehoods, and demagoguery coming from the president. Score one for Donald Trump whenever someone wilts under the barrage.

What can seem like dizzying insanity is by design. If you aren’t among the minority of Americans subscribing to the Trump cult, then he wants you to give up. When people are constantly pummeled with confusion, conflict, and outrage, some will stop paying attention and check out. There’s work to do, bills to pay, kids to Zoom-school, a raging pandemic to worry about. It can feel like it’s not worth the effort needed to sort out what’s true or false. Meanwhile, repeated lies gain traction. With the vague sense that everything is an unpleasant mess, then maybe some people won’t even bother to vote, especially with Republicans working overtime to make that fundamental right more difficult.

Trump may well be a dangerous psychopath, but he isn’t crazy. He doesn’t spread lunatic conspiracy theories because he believes them. Not for a moment does he actually think that Joe Biden secretly arranged the murder of Navy SEALs in a scheme to stage the takedown of Osama bin Laden. When Trump shared those claims recently on Twitter, his motivation was, as always, to provoke, entertain, confuse, “trigger the libs,” and change the subject from his own failures. Never mind that a pro-Trump Navy SEAL who was on the bin Laden mission openly called BS on Trump’s trolling. By the time NBC anchor Savannah Guthrie asked the president during last Thursday night’s town hall why he would spread such bizarre and baseless material, he wouldn’t give an inch.

“That was a retweet,” he said, apparently hiding behind the idea that retweets aren’t endorsements, even to 87 million followers. “That was an opinion of somebody, and that was a retweet. I’ll put it out there. People can decide for themselves.” (He said “retweet” in the exchange 4 times in 14 seconds—a tactic we’ll get to below.) Trump also emphasized to Guthrie that he knew “nothing” about QAnon, the dangerous pro-Trump conspiracy movement that claims Democrats are a satanic cabal of child molesters, only to praise it in the same breath for being “very much against pedophilia.”

These moments were not simply “bonkers” or reason for a CNN anchor to ask, “What the actual F?” The incoherence and provocation were the point. Trump knows that flooding the internet and airwaves with misinformation and outrage-bait (or “shit,” as his adviser Steve Bannon called it) helps to distract from the authentically hideous stories: His catastrophic dereliction of duty in the face of the coronavirus pandemic. His attempts to poison the voting process at the heart of American democracy. The revelations that he cheated the system and paid essentially nothing in federal income taxes. His long-running, increasingly dangerous courtship with violent far-right hate groups. And don’t look now, but his poll numbers are pretty grim too.

Trump is using the autocrat’s playbook. Vladimir Putin’s, to be specific.

It’s worth looking again at the big picture here, one Mother Jones began documenting shortly after the 2016 election: Trump is using the autocrat’s playbook. Vladimir Putin’s, to be specific. As contributor Denise Clifton wrote more than three years ago, Trump’s deluge of demagoguery and lies “echoes a contemporary form of Russian propaganda known as the ‘Firehose of Falsehood.’” With Election Day nearing, the comparison has never been more apt. In 2016, the nonpartisan think tank RAND published a study of the tactics and techniques used in Kremlin-controlled media. The end goal of what the researchers called “a shameless willingness to disseminate partial truths or outright fictions” was to entertain, confuse, and overwhelm the public. (The entertainment component can serve as inspiration for loyal followers—for example, a string of broadcast traveling stage performances showcasing a greatest-hits of grievance and outrageousness.)

Look back at just about any point in Trump’s presidency and it’s evident how he has fulfilled four defining features of the Kremlin playbook, as identified in the RAND study:

In a related book-length report published in 2018, RAND dug into a phenomenon of partisan politics that went back decades but was accelerating dangerously under Trump. As Clifton wrote, “This unprecedented behavior from a US president is akin to dumping gasoline on a long-smoldering trend RAND researchers call ‘Truth Decay’: a deepening disagreement over basic facts that is increasingly undercutting the fundamentals of our democracy, from elections to policymaking.” Whether it was Kellyanne Conway’s infamous coinage of the term “alternative facts” or the Trump team’s brewing storm of mendacity around the Mueller investigation, “misinformation coming from the highest levels of the US government fuels blind partisanship,” Clifton noted. “And it could potentially leave the public confused and mistrustful during crucial times, from national votes to a national security crisis.”

We are now deep into both.  Consider the national security side: Many of our former allies no longer trust us, top US generals regard Trump as a threat to the constitution, and the toll from the pandemic continues to exceed the total number of Americans killed in the 9/11 terrorist attacks—every week.

There is another way to measure how the four-year assault of Trumpism has warped the national consciousness. Early on, political commentators would respond to shocking statements or actions from the Trump White House by saying, “This is not normal,” and urging the public, “Don’t normalize this.” Hardly anyone says such things anymore.

There are far too many transgressions to track, which is also the point. Most people still remember the ominous moment recently when Trump refused to commit to a peaceful transfer of power after the November election. But what about just before that, when he launched the conspiracy theory that Ruth Bader Ginsburg’s dying wish was a hoax? Or just before that, when he argued that the toll from COVID-19 would be “very low” if you simply didn’t count all the dead Americans in states that elected Democrats? Or before that, when he defended a 17-year-old self-styled vigilante charged with homicide for gunning down three protesters in Wisconsin? Endless horrors await those willing to loop back through the plodding eternity that is Trump-induced time dilation, though it’s easy enough just to swirl in the here and now: fresh hype over a Russian disinformation op against Joe Biden. The Racist in Chief further whipping up hatred against women of color serving in Congress. The peddler of bleach and miracle cures savaging the most trusted public health official in the nation.

All the calculated madness and its consequences have left many people “fully exhausted and fully on notice,” as New Yorker writer Susan Glasser put it recently. “I have depleted my reserves of shock and awe. I fear there is no more outrage left to summon. But I have not changed my view in one vital respect: We have to keep writing it down. Every last word of it.”

That is indeed our moral obligation and mission as journalists, and it’s been a daunting one from the start. The good news is, despite the compounding damage from Trumpism to our norms, civility, institutions, and the rule of law, America remains a vibrant if wounded democracy, with the majority of the country sticking on Team Reality. More and more political commentators seem to have overcome their 2016 electoral PTSD and are willing to suggest that Donald Trump not only is a fraying Potemkin president but also a phony “strongman.” A clear majority of the country appears to be backing the other guy, the one who says it’s time to reject hateful division, come together and once again rely on decency and factual truth.

Here is one surefire fact amid the maelstrom of lies and misinformation: America’s 45th president won’t be turning down the firehose of falsehood one bit after the votes come in. The question is whether he will continue wielding it from inside the Oval Office, a gilded Mar-a-Lago banquet room, or perhaps on his way to face a court of law.