Tall people make more money. A 2004 study showed that every inch of height adds $789 to a person’s annual salary. That means that someone who is 6 feet tall makes about $5,523 more a year than someone who is 5 feet, 5 inches, like me. Another study found that people over 6 feet earn $166,000 more over the course of their careers than people who are 5-foot-5.

I’ve been thinking a lot about these studies recently and not because of my relative height disadvantage. Every time I see Donald Trump (6-foot-3) use juvenile tactics to try to intimidate his opponents. Every time I see that three-fourths of the House and the Senate are men. Every time I see a political party engaging in brazen power politics, like stalling one Supreme Court nomination (of a short man) while turbo-charging the confirmation process of another. Every time I see this arbitrary yet relentless assertion of height power, I can feel myself getting furious.

Donald Trump’s son Barron recently had the coronavirus, which has swept through Trump’s inner circle with the speed of, well, a highly contagious virus. What did Trump have to say about his son getting a disease that has killed more than 225,000 Americans? That he recovered? That he is doing well? That his father was sorry that he infected him? (Okay, just kidding.) No, for Trump, Barron getting the virus was an opportunity to assert one important fact: His son is tall. At an October 15 rally in North Carolina, here’s what Trump had to say about his son getting the coronavirus: 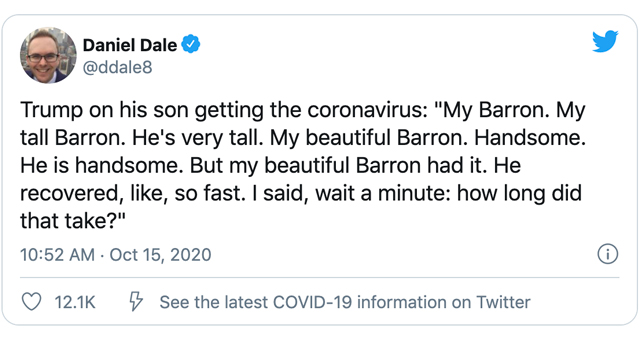 Trump on his son getting the coronavirus: "My Barron. My tall Barron. He's very tall. My beautiful Barron. Handsome. He is handsome. But my beautiful Barron had it. He recovered, like, so fast. I said, wait a minute: how long did that take?"

Trump’s bizarre response, both mawkish and flippant, is telling. His obsession with youth, beauty, and height are all part of his swaggering, machismo brand and yet another assertion of his “very good genes.” This is the putative leader of the free world for goodness sake. And then, to add insult to injury, there is the quantifiable fact that tall people make more. Damn. Money.

Clearly, being tall should not correlate to a higher salary. The richest and most powerful people on the planet spend their days sitting behind screens and talking on phones. Maybe they get driven around to some meetings. Barring professional athletes, powerful people have gotten where they are in the 21st century because they are (supposedly) using their brains. I personally have never seen or heard about a wrestling match breaking out during a board meeting.

And yet, the financial rewards tall people enjoy are insane/ridiculous/disproportionate to, well, anything.

It’s embarrassingly base and crudely logical: Height doesn’t exist in a vacuum. It’s an important metric for a reason. Tall people are more likely to be male, to have deep voices, and to be physically intimidating. (Side note: People with deep voices also make more money.)

It’s been 161 years since California Supreme Court ex-Chief Justice David S. Terry, who was pro-slavery, wrote a letter to California Sen. David C. Broderick, an abolitionist, challenging the senator to a duel. Unfortunately, the abolitionist was shot and killed. That was 1859. It is the last notable duel between US politicians before the barbaric tradition became illegal, marking the end of this kind of explicit use of violence to settle political disputes (except, you know, war, and the kind of intimidation we are seeing now, thanks to our president). But the power to physically subjugate someone still yields economic advantages.

It makes no sense. But it also seems to make brutal sense.

I was a ’90s kid, growing up in the electric shadow of the internet. Francis Fukuyama was predicting the end of history. Technology was going to solve the world’s resource shortages. I naively believed that the world was getting better—more tolerant, more fair, more resources to go around. Behind the emancipatory glow of the computer screen, age, gender, race, height, weight, and beauty weren’t supposed to matter. (Yeah, right.) As soon as bandwidth got good enough to transfer images and video, and Facebook instituted a regime of identity, the egalitarian promise of the internet went all to shit.

Now I’m convinced that the internet is ruining my life and destroying democracy. I see the Instagram aesthetic—bright colors, white teeth, filtered perfection—seeping into everything. The amount of plastic surgery on display at the Republican National Convention was mad creepy. Will a first lady ever have gray hair again? How about the first female president? The next male president? The internet was supposed to help set women free of gender stereotypes. But in the age of the influencer, the fe/male gaze has never been more powerful and looks have never been more profitable. Physical appearances garner likes, sponsorships, and, oh yes, money.

Did I mention that many studies demonstrate that tall people make more money?

Reckoning with the ways physical traits, money, race, gender, and beauty give people advantages in life is infuriating. It’s utterly deterministic, the antithesis of meritocracy. I hate that we live in a world of power politics. But I hate even more that these power politics could be based on such stupid metrics.

As I mentioned, I clock in at 5-foot-5 and, unfortunately, I’ve stopped growing. There’s a lot of things I’d enjoy doing with an extra $166,000. But there’s definitely an upside to my stature. At least every time someone looks at my accomplishments they won’t be thinking, “Maybe it’s just because she’s tall?” —Molly Schwartz