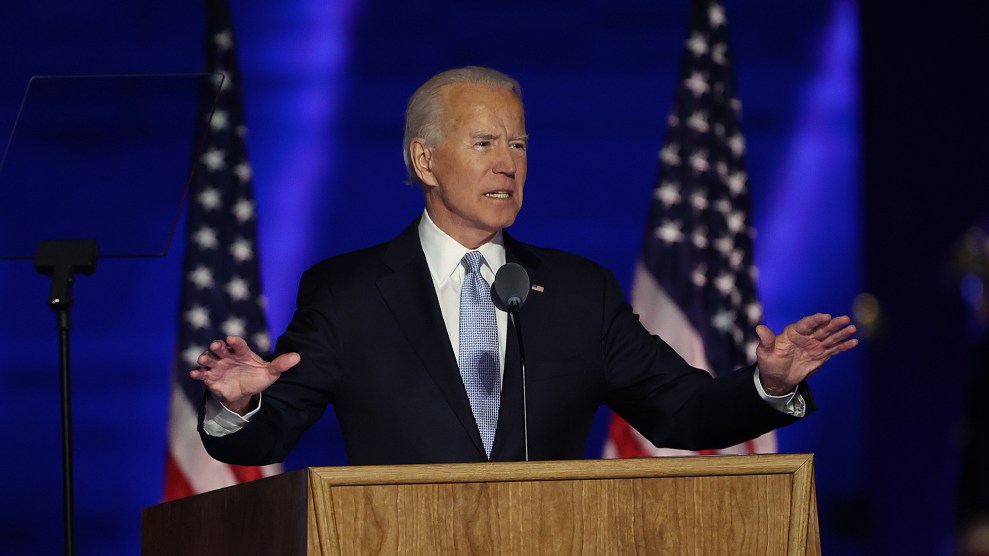 Much of Donald Trump’s anti-immigrant, anti-Muslim, anti-environment, climate change-denying, pro-police, anti-civil rights agenda—to name some of its prominent features—was enacted through executive power, via Trump’s executive orders and rule changes made by his cabinet. President-elect Joe Biden can therefore set to work reversing much of Trump’s work on his first day in office, without needing approval of a potentially Republican controlled Senate. And his team is putting in place plans to do just that.

On January 20, Inauguration Day, Biden would set in motion the process of rejoining the Paris Climate Accord. His administration would also reverse Trump’s decision to leave the World Health Organization, repeal the travel ban from Muslim-majority countries, and reinstate the Obama era program to protect Dreamers, according to the Washington Post.

On Sunday, the president-elect rolled out his transition website—along with social media feeds—detailing how he would tackle four prominent issues: COVID-19, the ongoing economic crisis, racial equity, and climate change. Named after his campaign policy platform Build Back Better, the transition plan shows how a Biden administration could quickly change official government policy.

Biden’s most immediate task will be getting the coronavirus, which is currently reaching record infection levels, under control. His transition team on Monday will launch a coronavirus task force that will prepare to implement a national pandemic plan when Biden takes office. On his first day, he intends to name a “national supply chain commander” and create a “pandemic testing board,” in the mold of President Franklin Roosevelt’s War Production Board. His seven-bucket transition plan includes a whole host of proposals, including how he’d attempt to create mask mandate across the country, greatly expand testing by doubling the amount of drive-through sites, and make a national website to track the level of infections in your local area.

But Biden’s transition team will not have access to agency information nor the millions of federal dollars dedicated to presidential transitions until the General Services Administration has determined that Biden won the election. More specifically, that task falls on Emily Murphy, a Trump appointee. If Murphy waits until the Electoral College certifies the results on December 14, it would cost Biden’s team important time for orchestrating a successful transition amidst an ongoing economic and public health crisis.