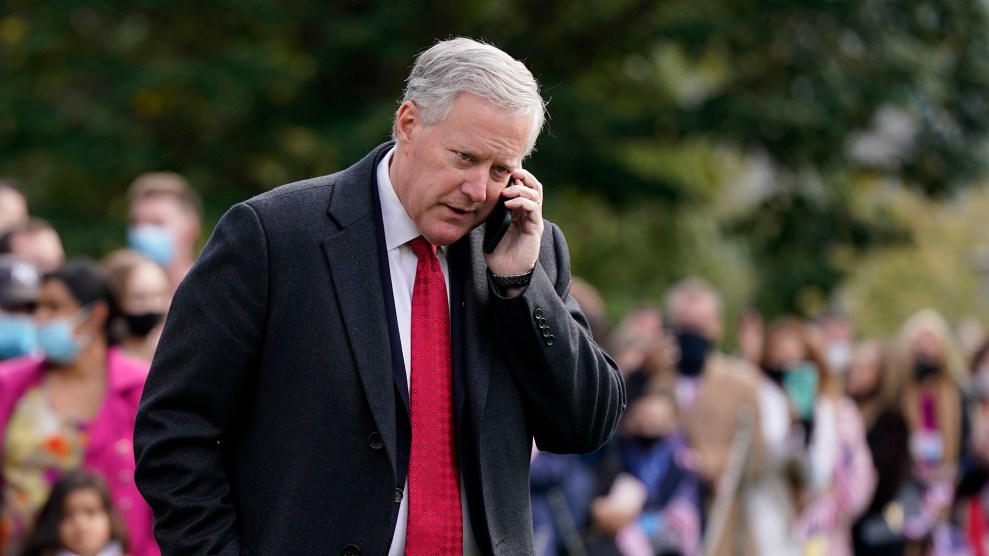 Late Friday night, Bloomberg News dropped a bombshell: President Donald Trump’s chief of staff, Mark Meadows, tested positive for COVID-19 on Wednesday. Four other White House staffers, including one of Meadows’ top aides, have also tested positive, and so has a top Trump campaign aide. One month after Amy Coney Barrett’s Supreme Court nomination ceremony turned into a possible superspreader event, the White House is in the midst of another coronavirus outbreak.

One White House official, who asked for anonymity because the official was not allowed to speak publicly about internal discussions, said people were told to keep quiet about the various cases. That follows how Mr. Meadows reacted when there was an outbreak in Vice President Mike Pence’s office a few weeks ago.

Anyone can get COVID, and whatever precautions you take are only as a helpful as the precautions other people take. But that’s the thing: The White House still isn’t taking the kinds of precautions other workplaces are taking. As the Times noted, Meadows’ positive test came less than a day after he attended a huge indoor mask-less party with hundreds of guests (including the First Family) at the White House to watch the election returns. When’s the last time you went to a big hours-long indoor party, let alone one where people weren’t wearing masks?

Meadows has made a point of defying the federal government’s recommendations on how to act in public during a pandemic. In October, he refused to do an interview while wearing a mask and walked away from reporters when they insisted he wear one. In June, he made fun of reporters for wearing masks. Keeping a positive COVID test a secret—let alone five positive COVID tests—leaves everyone who might have been exposed, or might have been exposed to someone who might have been exposed, in the dark. Just like last time. The emphasis on secrecy only underscores the administration’s apparent commitment to downplaying the pandemic even as it enters a truly dire stage.

The United States is in the midst of its third, and perhaps worst, surge of COVID-19 heading into a cold winter, when we’ll be worst prepared to deal with it. The White House appears to take the virus no more seriously than it did before that virus sent the president to the hospital. And the president? He’s completely checked out from his day job. We’re fast approaching a quarter of a million deaths, with cases still continuing to rise. It’s getting really really bad, and the people in charge are so at peace with that, they don’t even seem to care when they have it.