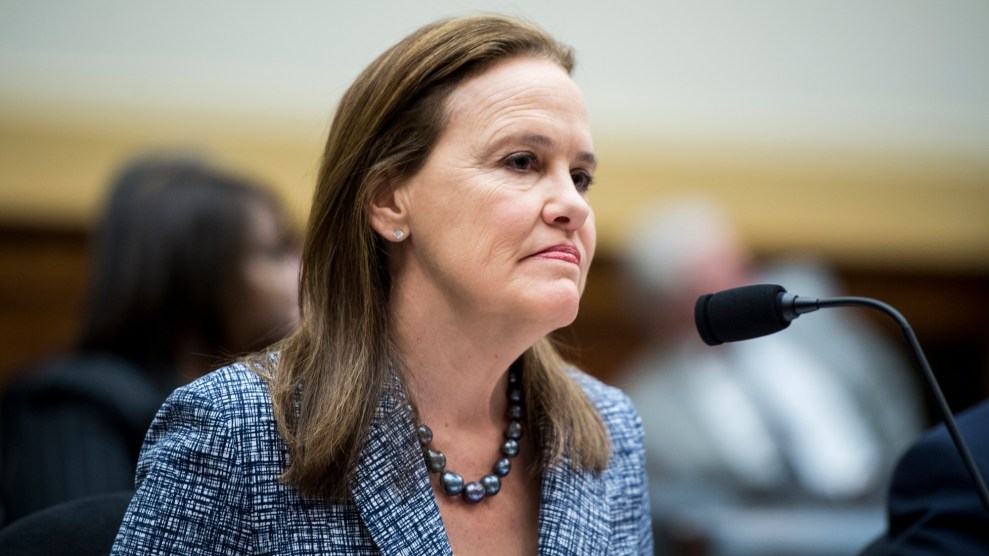 Joe Biden named key members of his national security team last week, but the president-elect conspicuously avoided announcing his choice for Defense secretary. The presumptive favorite, Michèle Flournoy, remains a deeply polarizing figure for progressive advocacy groups, who fractured over how to approach her candidacy during a Zoom call on Wednesday.

Organizers from several left-leaning organizations—Win Without War, Common Defense, and the Center for International Policy—convened the afternoon call with dozens of foreign policy activists and leaders. Participants ranged from the nonpartisan Quincy Institute for Responsible Statecraft, to mainstream liberal groups like the Progressive Change Campaign Committee, to more radical antiwar groups like Code Pink. Matt Duss, a foreign policy adviser to Sen. Bernie Sanders who has close ties to the Biden transition team, was also on the call.

The purpose of the event, details of which were first reported by Politico, was “to discuss coordination efforts around recommending progressives for foreign policy personnel positions in the incoming Biden administration,” according to an invitation obtained by Mother Jones. The intention had been to discuss preferred lower-level appointees for national security positions across the State Department, Pentagon, and other agencies. But early in the call, the focus returned to the secretary of Defense—a Cabinet position for which the left has not reached any clear consensus over who promote or oppose.

Flournoy has worked for the Defense Department in multiple Democratic administrations. Outside of government, she has maintained close ties to the defense industry through the think tank she co-founded, the Center for a New American Security. But progressives opposed to her nomination have raised alarm primarily about her other work, which includes serving on the board of defense contractor Booz Allen Hamilton and co-founding WestExec Advisers, a consulting firm that does business with tech and defense companies. Her role in helping to escalate US military involvement in Afghanistan and her support for the NATO intervention in Libya have also not won her many fans in the antiwar movement.

During Wednesday’s Zoom call, Medea Benjamin, who co-founded Code Pink, pushed strongly for groups to unite around opposing Flournoy. To her, anything less would be contrary to progressive values. “It feels to me like this is a major, major concession of the liberal foreign policy community,” she told Mother Jones. “It doesn’t bode well for challenging the Biden administration on key foreign policy issues.” Another activist echoed Benjamin’s concerns in the virtual meeting’s comment room.

But others on the call resisted additional criticism of Flournoy, according to people involved in the conversation. Arms Control Association executive director Daryl Kimball, who signed an open letter last month supporting Flournoy’s nomination, spoke out in favor of her. Kimball said criticism of Flournoy’s ties to the defense industry could just as easily apply to the other nominees Biden is considering. (In an interview with Mother Jones, Kimball called the discussion “very positive.”) At one point, Yasmine Taeb, a senior fellow at the Center for International Policy, suggested to attendees that progressive Democrats on Capitol Hill wanted outside groups to refrain from opposing Flournoy. Taeb, who earlier this year had expressed concerns about Flournoy to Biden’s team, confirmed this account to Mother Jones. “During several conversations with the offices of multiple key progressive allies on the Hill, we were advised not to launch an official opposition campaign against Flournoy because of the likelihood of her confirmation,” she said in a statement Thursday. She added that she had been advised by Hill progressives to urge senators to use the confirmation process to ask about “who [Flournoy’s] clients were at WestExec, which programs she specifically worked on, and whether she would be willing to recuse herself especially if she worked on major weapons programs.”

At least some Hill progressives say they have no objection to opposing Flournoy, according to people Mother Jones spoke with about the call. Rep. Ro Khanna (D-Calif.), who has been a leading voice against the United States’ involvement in the conflict in Yemen, tweeted last week that he’s inclined to support Biden’s cabinet but that he needs to see Flournoy commit to a full withdrawal from Afghanistan and a ban on arms sales to Saudi Arabia, which is fighting a brutal war in Yemen. He disagreed with the idea that congressional liberals wanted activists to give up on opposing Flournoy. “What is most important is to engage Flournoy in a dialogue with members about our policies in Yemen, Afghanistan, and the Middle East,” he said in a statement to Mother Jones on Wednesday night. “There is potential for her to address the concerns of progressives but it requires genuine introspection about our policies these past 20 years and a commitment to a new approach going forward.”

Other progressive lawmakers have opted for tactics to make Flournoy’s nomination uncomfortable, without naming her explicitly. Two influential progressives, Reps. Mark Pocan (D-Wis.) and Barbara Lee (D-Calif.), wrote Biden a letter last month urging him to “commit to appointing Secretaries of Defense with no previous ties to defense contractors.” According to one senior aide to a progressive House member, the sentiment across Congress’ left flank is uniform: “No one wants her, that’s for sure,” the aide told Mother Jones.

Flournoy’s nomination seemed all but inevitable several weeks ago, when Biden first began assembling his administration. But the transition team has reportedly been exploring other candidates, including former Homeland Security Secretary Jeh Johnson and retired Army Gen. Lloyd Austin. Both are on the board of major defense contractors: Lockheed Martin for Johnson and Raytheon for Austin. Johnson, who was the Defense Department’s general counsel before taking over DHS, played a key role in publicly defending and supporting the Obama administration’s drone program. (During the call Wednesday, the groups were generally aligned in opposition to Michael Morell’s possible nomination as CIA director, given his history defending the agency’s use of drone strikes and torture.) Austin, who only retired from the military in 2016, would need a waiver to serve as the department’s civilian leader, a drawback for progressives who objected as the military assumed a more active role in department affairs under James Mattis, the retired Marine Corps general who Trump picked as his first Defense secretary.

But even with the odds stacked against them, some activists on Wednesday’s Zoom call believed that progressives should not stay silent. “Those who believe that Johnson and Austin are just as bad as Flournoy should criticize all of them and call for a better alternative,” Erik Sperling, the executive director of Just Foreign Policy, told Mother Jones. “The pressure would draw attention to the life-and-death issues our organizations work on and would be more likely to force concessions from the administration.”

Sperling’s organization joined a new letter addressed to Biden led by two groups—the Yemen Relief and Reconstruction Foundation and the Yemeni Alliance Committee—that calls for the left to support alternatives to Flournoy, such as Sen. Tammy Duckworth (D-Ill.), an Army veteran who now serves on the Senate Armed Services Committee. The letter, first reported by the AP, condemns Flournoy’s “record of ill-advised foreign policy positions” and asks the president-elect to instead consider Duckworth and Sen. Kirsten Gillibrand (D-N.Y.), both of whom have repeatedly voted to withdraw the US from involvement in Yemen. It has been signed by groups openly opposing Flournoy’s nomination, such as Sperling’s Just Foreign Policy, Justice Democrats, and Demand Progress. Khanna, too, praised Duckworth in a Zoom call with several leftist foreign policy groups earlier this week. “I think Tammy Duckworth would be a fine choice,” he said in that call.

In the weeks before Biden’s election, Flournoy was not shy about reaching out to groups who were expected to be critical of her. On a call with progressive foreign policy activists in October, she discussed American support for Saudi Arabia’s war in Yemen and other issues important to liberals, such as the use of drones and the rising defense budget. Her efforts don’t appear to have changed many skeptical minds, but she did make clear that she would be receptive to future outreach, one source on the October call said.

A spokesperson for Flournoy declined to comment on the record.