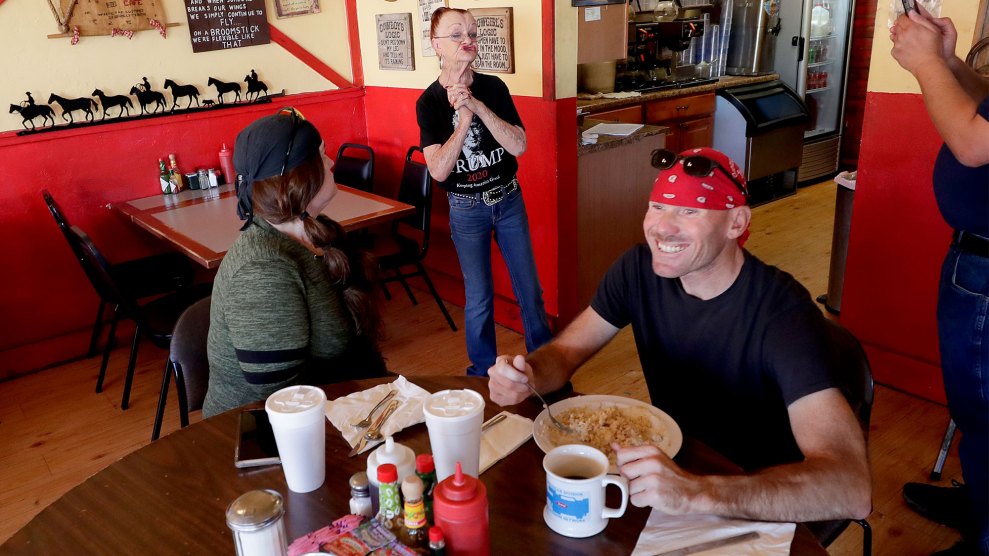 Customers cheer as Debbie Thompson, owner of the Horseshoe Cafe, informs them that she is violating the state's stay-at-home order by allowing guest dining at her restaurant in Wickenburg, Arizona, in May.Matt York/AP

After months of mishandling its COVID-19 response, Arizona has reached a new low: The state now has the highest infection rate of anywhere in the world, according to new data released this week. Over the past seven days, the state has seen a daily average of 118.3 new cases per 100,000 residents, well above countries like the Czech Republic (99.4) and the United Kingdom (86).

But if you drive around many parts of the state, you wouldn’t know that it leads the world in infections. That’s because Gov. Doug Ducey and municipal leaders think it’s perfectly fine to just keep doing what Arizonans have been doing for months, which perhaps is best described as “whatever the hell they want”—including eating and drinking inside at bars and restaurants so long as you wear a mask when you first walk through the door.

Ducey refuses to enact a statewide mask mandate or make changes to his unusually relaxed restrictions on large events, indoor gatherings, and non-essential business openings. Driving around Tucson, I see packed parking lots at outlet malls, lines out the door at brunch places with indoor seating only, and sports bars with dozens of people hanging out inside without masks. Bowling alleys, arcades, and movie theaters are also open at half capacity, and indoor gyms at 25 percent occupancy.

Compare that with California, which has the second-highest infection rate in the United States right now, with an average of 95.8 daily cases per 100,000 people. California is currently in crisis mode, with strict restrictions on indoor activities, and Gov. Gavin Newsom issued a stay-at-home order last month that shut down indoor and outdoor dining, among other things, until the numbers go down.

Driving around Tucson, I see packed parking lots at outlet malls, lines out the door at brunch places with indoor seating only, and sports bars with dozens of people hanging out inside without masks.

In Arizona, it apparently doesn’t matter that the state is breaking nationwide records for infections: Life has gone on basically the same since the state opened up in May, after briefly enacting tighter restrictions in the spring. The summer months saw huge spikes in infection rates and hospitalizations when extreme heat made it more difficult to be outdoors. Now, even though Arizona has some of the most beautiful weather in the country—it was 70 and sunny Tuesday afternoon in Phoenix and Tucson—the infection rates and hospitalizations are higher than during the summer spike. The kind of social interaction currently taking place inside could easily be forced outdoors, but apparently that’s just not the kind of thing people here (elected officials and regular folks) want to deal with right now.

In early December, as the number of cases, deaths, and hospitalizations continued to rise, health care leaders in Arizona wrote a letter urging the state health department to immediately issue a statewide shelter-in-place order, end all indoor dining, and close athletic activities for at least a month to avoid a disaster. Ducey held a press conference days later thanking Arizonans for being “so responsible” over Thanksgiving (even though his own health department reported a spike after the holiday weekend), ignoring the recommendations of the health care leaders. He made no changes to slow down the spread of the coronavirus. Days later, nurses at the Tucson Medical Center wrote a public letter to the city’s residents practically begging them to stay home ahead of Christmas.

In Tucson, city leaders enacted a three-week-long 10 p.m. curfew after Thanksgiving but made no other mitigating changes. As public health experts I talked to about the efficacy of curfews pointed out, it does does little good to stop serving people drinks indoors at a bar at 10 p.m. when you’ve had hundreds of maskless patrons there throughout the day.

Of course, there are thousands upon thousands of Arizonans taking this pandemic seriously and living in a new normal that follows all the guidelines we now know work to slow the spread of this deadly virus. So many of us have changed the way we live and are sticking to it because the pandemic is far from over. But as this Instagram account seems to show, Ducey’s twentysomething son, Jack, is not one of those people.

We received this video from a follower which was posted to Jack Ducey’s public Instagram story earlier this week.