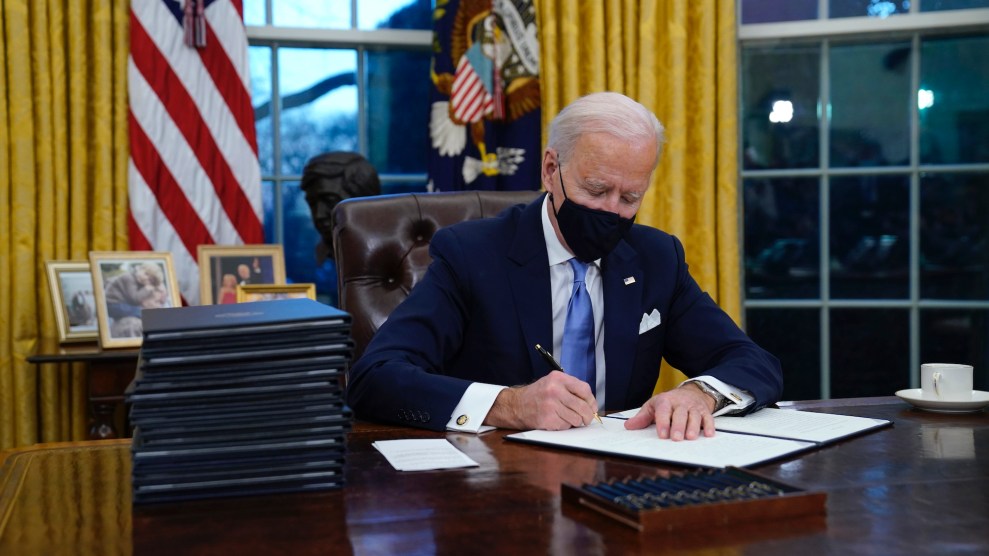 Donald Trump began his presidency with a Muslim ban, and President Joe Biden has begun his by revoking one. On his first day in office, Biden followed through on a campaign promise by issuing an executive order that revokes the final version of the Muslim ban—which blocked people from seven, mostly Muslim-majority nations from entering the United States—along with another immigration ban that largely impacted people from four African nations.

Jake Sullivan, President Biden’s National Security Adviser, told reporters on Tuesday that the order directs the State Department to return to normal processing of applications for people who’ve been impacted by the bans. Sullivan added that Biden is asking the State Department to find ways to help people who’ve been denied entry to the United States as a result of those bans, as well those whose applications have been stuck in administrative limbo.

The bans have led to thousands of children, spouses, and parents being separated from loved ones in the United States. Immigration lawyers say bureaucratic hurdles, Trump’s attacks on the immigration system, and the ongoing pandemic mean that it will likely take months, and potentially more than a year, before people are finally able to immigrate to the United States.

“While this is absolutely amazing news that Biden is getting rid of the Muslim and Africa travel ban,” said Mahsa Khanbabai, a Massachusetts immigration attorney, “I think, sadly, it’s really going to take time for families to be able to actually come together.” Hiba Ghalib, an attorney at the Atlanta-based immigration law firm Kuck Baxter, said that in other cases people haven’t started green card applications because of the Muslim ban. Now, those cases will be starting from scratch.

Trump’s initial Muslim ban in January 2017 caused chaos and outrage at airports across the nation as people from mostly Muslim-majority nations were blocked from entering the United States. As Mother Jones reported at the time:

Hundreds of people rallied at San Francisco International Airport Saturday, temporarily occupying the arrivals level in protest of President Trump’s “Muslim ban.” The crowd moved into the terminal after reports circulated that six immigrants were not being allowed to leave the airport as a result of the executive order.

The crowd chanted, “No ban, no wall, sanctuary for all,” and “let the lawyers in.”

The rushed executive order was quickly blocked in court, but a third version of the ban was upheld by the Supreme Court in 2018. The ban applied to people from Iran, Libya, North Korea, Somalia, Syria, Yemen, and Venezuela, and allowed some people to receive waivers to come to the United States. But in practice, the waivers often proved impossible to obtain.

Last year, Trump issued another immigration ban that applied to six countries, including Nigeria and three other African nations. The Africa ban was ostensibly designed to protect national security because of vague concerns such as how much intelligence information the targeted countries were sharing with the United States. In practice, the ban appeared to be more about demographics: It only applied to immigrants who wanted to settle in the United States, not people traveling on temporary visas.

“He’s missed these immensely important milestones in his family’s life. What kind of damage does that leave on a person?”

Now that the bans are lifted, Khanbabai is most worried about people like an Iranian client who has been trying to get a green card. He’s been apart from his wife who’s been in the United States throughout her pregnancy and the first year of their child’s life. “He’s missed these immensely important milestones in his family’s life,” she added. “What kind of damage does that leave on a person?”

How quickly families are reunited will partly depend on how much the Biden administration prioritizes the rebuilding of a State Department that’s been gutted by the Trump administration, Khanbabai said. Then there are questions about how applications that already have been denied or allowed to languish will be handled. In many cases, Khanbabai explained, some components of applications such as medical examinations are now out of date. Further complicating the situation is that those medical exams have to be performed by US government-approved physicians who aren’t in countries like Iran, Yemen, and Syria. That means people from those countries may have to travel to a third country during a pandemic in order to secure new medical exams. Similarly, since the US has no embassy in Iran, many people may have to travel internationally for their green card interviews.

The end result, Khanbabai said, is that some people may end up waiting more than a year to get their green card, although she expects quicker results for people traveling on temporary visas. She hopes that the State Department will expedite the process by doing things like extending the validity period of medical exams and using video interviews instead of in-person appointments.

For Ghalib’s clients, the decision to end the ban has provided a glimmer of hope, even if the benefits won’t be immediate. “After dealing with [the immigration] process for so many years—some of them even decades—they know that even when things work well, they don’t work quickly,” Ghalib said. “It’s the silver lining of such a horrible experience. You take the good and you really run with it.”