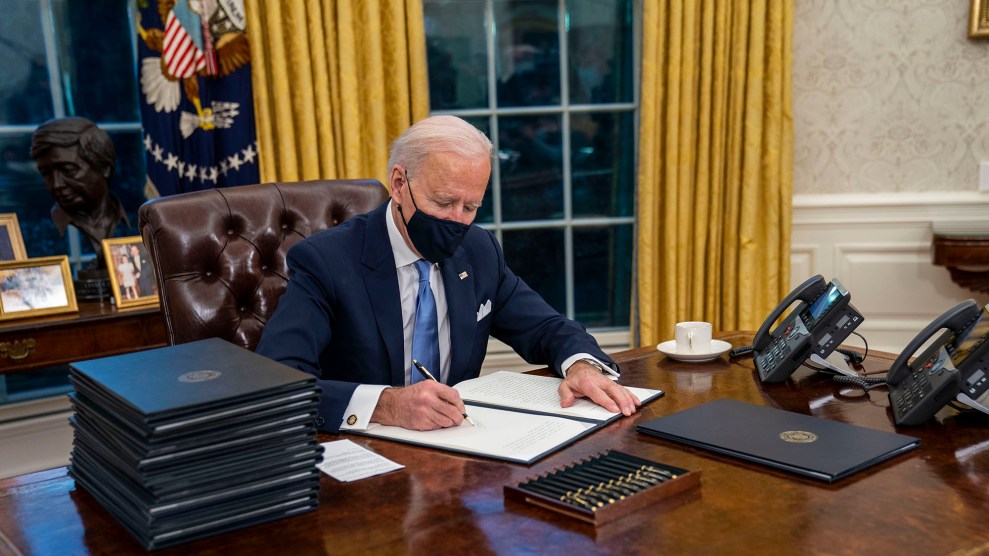 Joe Biden inherited a democracy left in tatters by Donald Trump. The Trump administration politicized and corrupted core domestic institutions such as the 2020 census and the United States Postal Service to serve the interests of the GOP. Republican-controlled states refused to make it easier to vote in the runup to the election even amid a raging pandemic. And Trump and his GOP allies launched an unprecedented two-month effort to overturn the results of the election, culminating in an insurrection at the US Capitol.

Biden won’t be able to unilaterally reverse many of these threats to democracy, just as Trump couldn’t unilaterally overturn the election results. Much of the power in the US election system rests with the states and the Congress. (Congressional Democrats have made passing sweeping democracy reforms and restoring the Voting Rights Act a top priority.) But here is what Biden can do to reverse GOP attacks on democracy and protect voting rights:

The Trump Justice Department filed just one lawsuit to prevent voting discrimination under the Voting Rights Act, compared with dozens filed during past administrations. One key step the Biden administration can take is to start enforcing the law—and there is every indication it intends to do so. “The biggest thing to change will be the willingness to use the enforcement authority they’ve got through DOJ,” says Justin Levitt, who served as deputy assistant attorney general in the Civil Rights Division under President Obama.

Biden has nominated two of the top civil rights lawyers in the country to key positions at DOJ: Vanita Gupta, the former head of the Civil Rights Division under Obama, has been nominated to the number three position at DOJ while Kristen Clarke, the former head of the Lawyers Committee for Civil Rights Under Law, has been nominated to head the Civil Rights Division. Both have extensive experience litigating voting rights cases, which is a strong indication that Biden’s Justice Department will aggressively enforce the voting rights laws on the books.

“The biggest thing to change will be the willingness to use the enforcement authority they’ve got through DOJ,” says former deputy assistant AG Justin Levitt.

The Biden DOJ’s ability to stop voter suppression will be hampered by the 2013 Supreme Court decision ruling that states with a long history of voting discrimination no longer have to approve their voting changes with the federal government. But the DOJ can still use its considerable firepower to sue states that engage in voting discrimination under a different section of the Voting Rights Act—as the Obama administration did in challenging voting restrictions in North Carolina and Texas—and can threaten litigation against states to deter them from restricting the right to vote.

The department could also investigate Trump’s efforts to overturn the 2020 election—the DOJ’s inspector general announced on Monday he was probing a plot to oust the acting attorney general in an attempt to void Georgia’s election results—to prevent it from happening again.

Though voter registration is done state-by-state, the Biden administration can issue an executive order directing federal agencies to provide voter registration services under the National Voter Registration Act in coordination with states. Offering to register people who interact with agencies like the Department of Veterans Affairs, Social Security Administration, and the Indian Health Service could sign up millions of new voters, particularly among underserved communities with lower registration rates. The US Citizenship and Immigration Services could also register newly eligible Americans at naturalization ceremonies.

Due to Republican pressure, the Obama administration didn’t include a voter registration option when people signed up for health care under the Affordable Care Act, and voting rights advocates say the Biden administration shouldn’t make the same mistake.

The Trump administration did everything it could to manipulate the 2020 census—which determines how $1.5 trillion in federal funding is allocated, how legislative districts are drawn, and how many congressional seats and electoral votes each state receives—to protect white GOP political power. First it tried to add a question about US citizenship to depress immigrant participation. When that effort was blocked by the Supreme Court, the administration issued executive actions to exclude undocumented immigrants from the count used for congressional apportionment, which could diminish representation for diverse states like California, and ordered the Census Bureau to collect citizenship information from existing government records so that Republicans could do even more egregious forms of gerrymandering. It also cut the census count short by a month when the bureau asked for more time because of the pandemic, jeopardizing the bureau’s constitutional mandate to accurately count every person in the country because of the rushed timeline.

Biden moved quickly to reverse these attacks on the integrity of the census, issuing an executive order during his first day in office to end Trump’s plan to exclude undocumented immigrants from congressional apportionment and collect citizenship data for redistricting purposes. Susan Rice, head of the Domestic Policy Council, said Trump’s effort to remove undocumented immigrants from the census count “violates the constitution and the Census Act and is inconsistent with our nation’s history and our commitment to representative democracy.”

Still, problems remain. The Census Bureau announced in November that it had discovered “anomalies” in the count that needed to be fixed. Census experts say it’s vital that the Biden administration give the bureau the time and space it needs to review the data and make any changes needed to ensure an accurate count—and so that legislative and congressional districts are drawn accurately—before the results are set to be released in March.

Another core democratic agency the Trump administration has corrupted is the United States Postal Service, with Trump megadonor and Postmaster General Louis DeJoy issuing a series of sweeping changes, including closing post offices, banning overtime, removing mail sorting machines, and preventing extra trips, that could’ve nearly sabotaged the agency and mail-in voting during the 2020 election. Many of these changes were temporarily blocked by the courts before the election, which prevented mail-in ballots from being delivered too late and rejected on a large scale. But USPS delays skyrocketed over the holidays—with just 64 percent of first-class mail delivered on time—and DeJoy remains in place as postmaster general, promising to unveil major changes after the election that could lay the groundwork for eventual privatization of the postal service, a longtime GOP objective. “It’s like the Supreme Court,” says USPS expert Steve Hutkins, who runs the Save the Post Office blog. “Trump is gone but he left a Republican postal service.

Since the USPS is an independent agency under the executive branch, Biden can’t directly fire DeJoy, who has no fixed term. That can only be done by the Postal Service Board of Governors. Trump named all six members of the nine-member board, which has a 4–2 GOP majority. But if Biden appoints three new governors, who must be confirmed by the Senate, to existing vacancies that would give Democrats a 5–4 majority that could oust DeJoy and roll back his changes to the agency. “Stopping DeJoy is at the top of the list,” says Hutkins.

Beyond replacing DeJoy, Hutkins says Biden should appoint a commission to advocate for changes that would shore up USPS, such as eliminating the requirement that it prefund employees’ health care plans decades in advance, which has led to massive shortfalls, along with forgiving its debt, and modernizing the agency by allowing postal banking and other government services at post offices. As Americans continue to vote by mail in larger numbers, the fate of the USPS and American democracy are intertwined.

With democracy under threat, progressive organizations like Demos and the Center for American Progress have called on the administration to create an office of democracy reform that would coordinate efforts to protect voting rights among the various parts of the federal government while working with the states and Congress to advocate for pro-democracy policies.

“Historically, democracy issues writ large have received limited attention from the president and his staff,” writes the Center for American Progress in a recent report. “In previous administrations, there was no single point person at the White House for issues such as voting rights, redistricting, and campaign finance regulation; to the extent that these issues received any White House attention, they were divided among political advisers and policy staff specializing in other areas.” With threats to democracy becoming increasingly urgent, CAP says, “the Biden administration should create a new office within the Domestic Policy Council that focuses specifically on democracy reform.”