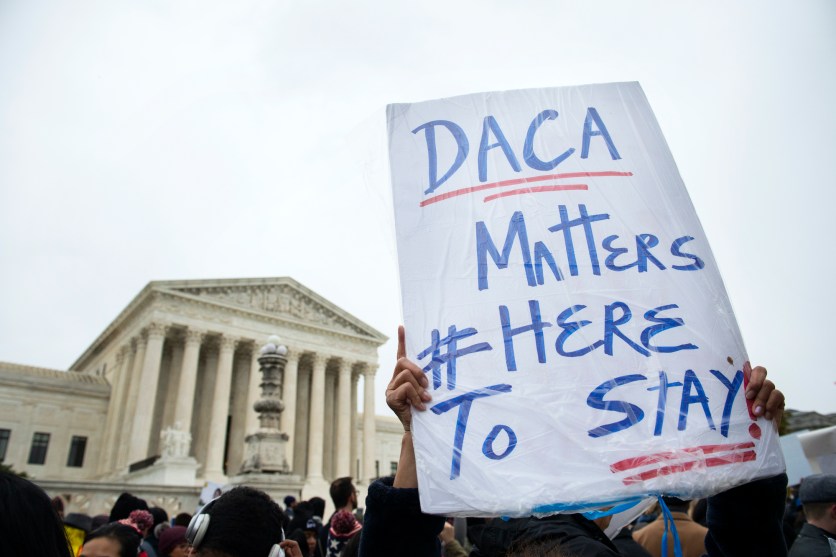 A protester holds up a sign during a rally outside of the U.S. Supreme Court.Caroline Brehman/AP

As he promised during his campaign, on his first day in office President Joe Biden attempted to reverse a number of former President Donald Trump’s most draconian immigration policies. He is sending a comprehensive immigration reform bill to Congress and signing several executive actions to halt the wall construction projects along the Southern border and stop the ban on travel from predominantly Muslim countries.

“This is an important step in providing relief to individuals and families harmed by this Trump Administration policy that is inconsistent with American values,” a press release says, referring to the travel ban’s abolition.

Biden is also signing a memo aimed at “preserving and fortifying DACA” and revoking Trump executive orders that “directed harsh and extreme immigration enforcement” and excluded undocumented immigrants from the census.

While his executive actions don’t require congressional approval, immigration reform does. Biden’s proposed legislation, the US Citizenship Act of 2021, focuses on providing a road map to citizenship for as many as 11 million undocumented immigrants, addressing employment and family-based visa backlogs, and tackling underlying causes of migration from Central America. If enacted, the measure could become the most comprehensive immigration overhaul since Ronald Reagan signed the Immigration Reform and Control Act of 1986 and allowed nearly 3 million people to gain legal status. During an interview with Univision, Kamala Harris said the plan is “a smarter and a more humane way of approaching immigration.”

The confusing and often delayed path to citizenship will be clarified and accelerated should the bill become law. The new administration’s plan was first reported by the Washington Post and confirmed by incoming White House officials during a call on Tuesday, proposes two pathways to citizenship for qualifying immigrants who have been living in the United States as of January 1, 2021. The group includes many immigrants who’d once been protected under policies that Trump moved to rescind as part of his assault on immigration

Beneficiaries of the Obama-era Deferred Action for Childhood Arrivals program, often referred to as Dreamers, and immigrants who fled certain countries torn by civil war or environmental disasters and hold Temporary Protected Status, as well as farmworkers, would become eligible for green cards immediately and for citizenship after three years of permanent residency. For other undocumented immigrants, including essential workers, the bill proposes an eight-year pathway to citizenship. After five years with temporary status, they would be able to apply for legal permanent residency and, in another three, they would have the option to become naturalized citizens.

In seeking to establish simpler and quicker routes to citizenship, Sanaa Abrar, advocacy director at United We Dream, told Mother Jones last week, “President-elect Biden is sending a clear message about the values that the incoming administration will prioritize.”

In both cases, immigrants need to meet certain eligibility requirements, such as passing criminal and national security background checks and paying taxes. The proposed timeframe would represent an improvement on the 13-year citizenship pathway set forth in the 2013 bipartisan legislation that was blocked by the Republican-controlled House.

With the goal of promoting economic growth and “keeping families together,” the proposed legislation attempts to reduce the backlog and waiting times for employment and family-based visas by increasing caps based on the country of nationality, which would benefit immigrants from countries with a high volume of visa and green card applications such as India and China. It also eliminates provisions prohibiting immigrants from returning to the US after being unlawfully present in the country.

Some of the bill’s components also include measures to further protect workers vulnerable to exploitation and facilitate the access to relief from deportation to undocumented survivors of trafficking and domestic violence.

Throughout his presidential campaign, Biden criticized the Trump administration’s decision to cut off aid to Central America, saying it was likely to “increase migration to our Southern border, not reduce it.” Another central piece of his plan is a $4 billion plan to address corruption, violence, and other factors prompting immigrants to flee the Northern Triangle, a region Biden grew familiar with as Obama’s emissary to Latin America and the Caribbean. The strategy for Central America also mentions the creation of processing centers across countries to screen migrants who might qualify to enter the US as refugees.

The bill would bring back a program Trump moved to end that allowed Central American minors to enter the country as refugees.

Unlike previous legislation, advocates have noted, this proposal doesn’t explicitly suggest enhanced enforcement as a tradeoff to appeal to GOP members. It also represents a significant departure from Trump’s approach to slowing immigration by focusing on border security. In contrast, Biden’s plan calls for extra investment in technology to monitor travel and trade.

On Tuesday, Senate Majority Leader Chuck Schumer said in a tweet that comprehensive immigration reform is “one of the most important things a Democratic Congress can do.” With the razor-thin Democratic majority, Biden will need 60 votes from senators—which means at least 10 from Republicans—to pass the US Citizenship Act of 2021. Republican Sen. Tom Cotton of Arkansas and Rep. Mo Brooks of Alabama have attacked the citizenship pathway provisions, calling the plan “radical” and suggesting it could negatively impact American citizens.

Advocates and pro-immigration groups have reacted with enthusiasm and relief to Biden’s immigration agenda. “Our nation needs a 21st century immigration system that meets the needs of our communities, the economy, and respects the dignity of each person in this country,” Jorge Loweree, policy director at the nonpartisan American Immigration Council, said in a statement. “Some of this work requires bold legislative action while other reforms can and must be accomplished by the administration itself.”

But they’re also ready to point out other priorities, such as the need for a 100-day moratorium on deportations, which Biden’s administration has committed to implementing, in addition to steps to fix the backlog and politicization of immigration courts, and the importance of reuniting separated families.

“These are welcome first steps after four brutal years of attacks on Black and Brown people,” Manar Waheed, the ACLU’s legislative policy counsel, said. “But much more needs to be done. The incoming administration is inheriting the horrific policies and legacy of the Trump administration, and it must sharply, swiftly, and completely reverse course and begin to move us forward.”