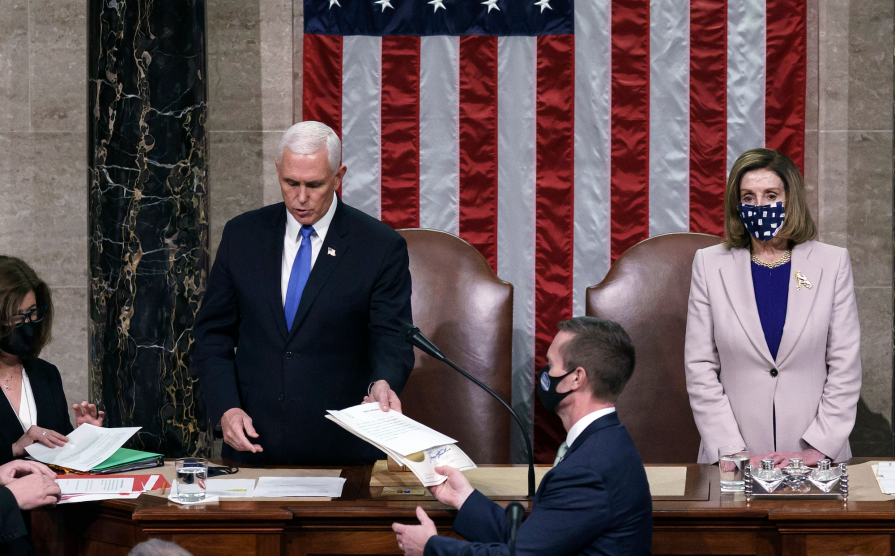 Nearly 14 hours after Congress convened to certify the 2020 election results, Joe Biden was affirmed as the next president of the United States, closing out a day of unprecedented mayhem after pro-Trump insurrectionists breached the Capitol and engaged in a shocking, hours-long display of domestic terrorism incited by Donald Trump. If you somehow managed to miss it, you can catch up on the mob here.

We’ll be providing new updates throughout the day below:

7:22 p.m. ET: Trump is back on Twitter, this time with a video calling yesterday’s events a “heinous attack on the United States Capitol.” Trump said that he “immediately deployed the National Guard and federal law enforcement to secure the building and expel the intruders,” but reports suggest that Trump was initially hesitant to deploy the National Guard and that Vice President Mike Pence was ultimately the one to mobilize them.

Trump also seems to have come as close to conceding as he has thus far. “My focus now turns to ensuring a smooth, orderly, and seamless transition of power,” he said. “This moment calls for healing and reconciliation.”

And, amid criticism for failing to keep pro-Trump insurrectionists out of the Capitol, the chief of Capitol Police will resign on January 16, the agency announced today.

The House sergeant-at-arms is also stepping down.

5:53 p.m. ET: White House Press Secretary Kayleigh McEnany stood at the podium in the press office for the first time since Wednesday’s mob attacks on the Capitol and said…almost nothing.

She read a short statement “on behalf of the entire White House” saying that “the violence we saw yesterday” was “appalling, reprehensible and antithetical to the American way.”

Just a day after violent rioters waving Trump flags and wearing MAGA hats terrorized Congress and broke into the Capitol building, incited by Trump himself, McEnany said that “those thugs are the opposite of everything this administration stands for.” She added that those who broke the law should be “prosecuted to the fullest extent of the law.”

McEnany ended the brief statement with a call for unity, took no questions, and walked out.

"Very fine people on both sides."
"When the looting starts, the shooting starts."
"Stand back and stand by."
"Go home. We love you. You're very special."

Trump made this happen. pic.twitter.com/swWkb1YBLP

4:10 p.m. ET: This is perhaps outside Mother Jones’ usual scope, but the indie artist Ariel Pink is coming under fire for having attended a pro-Trump rally in Washington, DC, yesterday. There’s no evidence that Pink was part of the mob that stormed the White House. But still.

2:09 p.m. ET: House Speaker Nancy Pelosi just called for Trump’s removal from office, if not through the 25th Amendment, then through impeachment.

.@SpeakerPelosi: "Remove this president by immediately invoking the 25th amendment." If those necessary to do so are unwilling, "the Congress may be prepared to move forward with impeachment."

1:54 p.m. ET: President-elect Biden is addressing the nation, lamenting of yesterday’s events, “I wish we could say we couldn’t see it coming.”

And Biden takes issue with referring to the people who broke into the Capitol as protesters. “They were a riotous mob,” he said. “Insurrectionists. Domestic terrorists.”

1:35 p.m. ET: The resignations keep coming. Next up is Transportation Secretary Elaine Chao, who is married to Mitch McConnell.

1:17 p.m. ET: Michael Chertoff, who served as Secretary of Homeland Security under President George W. Bush, has joined the chorus of current and former government officials calling on Trump to leave office. Chertoff co-signed a letter with Michael Abramowitz, president of the nonprofit research and advocacy organization Freedom House, urging Trump’s removal from the presidency. “Whether through resignation, impeachment and conviction, or invocation of the 25th amendment,” they wrote, “President Trump must leave office immediately.”

12:41 p.m. ET: Senate Minority Leader Chuck Schumer urged Vice President Mike Pence to invoke the 25th Amendment to remove Trump from office immediately. He said that if Pence fails to act, Congress should impeach Trump. “What happened,” he said, “was an insurrection against the United States, incited by the president.”

10:48: a.m. ET: Bill Barr has released a statement condemning Trump: “Orchestrating a mob to pressure Congress is inexcusable. The President’s conduct yesterday was a betrayal of his office and supporters.”

A WH official says this AM that Trump still plans to award the Medal of Freedom to 3 golfers today during an 11:30a East Room ceremony.

It's not open to the press.

8:00 a.m. ET: In a string of 11th-hour gestures of morality, Mick Mulvaney, Trump’s former chief of staff who has since served as a special envoy to Northern Ireland, is the latest Trump administration official to resign in response to Wednesday’s violence. “I just can’t do it,” Mulvaney told CNBC. “I can’t stay.” Others who have resigned include Melania Trump’s chief of staff, Stephanie Grisham. Here’s a reminder from our reporter Nathalie Baptiste on what Mulvaney had to say about a potential Trump concession just two months ago:

This was Mick Mulvaney in November. pic.twitter.com/umuCHpcID8

4:20 a.m. ET: Trump, whose own Twitter account remains locked, released a statement through his aides saying there would be an “orderly transition on January 20th.” It’s the closest thing yet to a concession. But Trump still insisted that he “totally” disagreed with the election results, claiming falsely that the “facts” back him. As some have noted, Trump’s statement is likely a deflection in response to growing calls to invoke the 25th Amendment.

…fight to ensure that only legal votes were counted. While this represents the end of the greatest first term in presidential history, it’s only the beginning of our fight to Make America Great Again!”