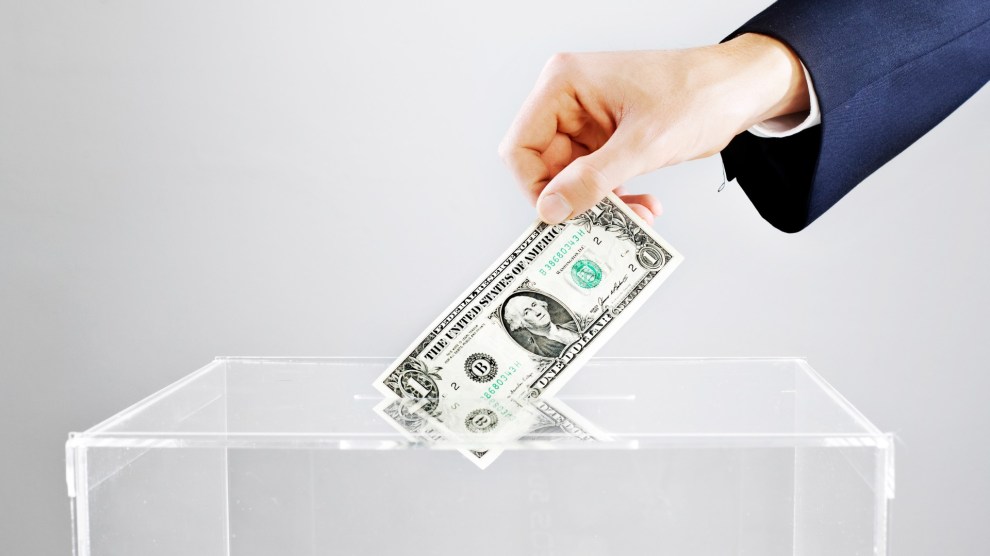 Since January 6, dozens of corporations have taken a stand against the 147 Republicans who voted last week against certifying President-elect Joe Biden’s victory and made common cause with the violent mob who sought to ensure Trump remain in office. More than a dozen companies, including big banks and Fortune 500 companies, have paused their political giving to these Republicans. Several dozen others have stopped political contributions altogether, across both parties.

“It was a classic Faustian bargain.”

But over the last four years, even as Trump undermined valid elections and retained the fulsome support of Congress’ Republicans, many of these same companies not only supported these candidates with sizable political donations, but relied on them to pass laws that saved them millions. The result? Billions in corporate tax savings, and a more lenient regulatory landscape that will outlast the president and Republican party factions that these companies are now backing away from.

“Trump has not only broken norms of democracy, but broken the law for years, while they comfortably stuffed their pockets with cash from tax cuts and deregulation,” says Dennis Kelleher, president of Better Markets, a Wall Street reform nonprofit. “Now that Trump is merely days from leaving office, they have claimed to have suddenly found their values. It is, in many ways, hypocrisy.”

As one Democratic congressman put it to the Washington Post: “Their attitude was: ‘Let’s take the big tax cuts and hold our noses for the obvious xenophobia and authoritarianism.’ It was a classic Faustian bargain.”

The biggest prize won by the corporations from Republican policy-making in the Trump era came with the 2017 Tax Cuts and Jobs Act. The bill—his first major legislative achievement—enacted historic changes that have disproportionately benefited corporations and the wealthy.

The bill cut corporate tax rates from 35 to 21 percent, which “by itself is an enormous benefit for corporations—just a windfall gain,” says William Gale, co-director of the Tax Policy Center. The bill also allowed businesses to claim bigger tax deductions for spending and capital investment. And while many of the bill’s changes to personal tax provisions automatically expire in 2025, some of its most significant changes to corporate taxes—including the decreased tax rate—don’t. The Joint Committee on Taxation predicted the bill would save companies $1.35 trillion over the next decade. So far, their math looks on track, with companies netting nearly $150 billion in savings in 2018 alone.

Many of the companies who are now withholding their support from these GOP members are among the biggest beneficiaries of the tax bill those same lawmakers helped shepherd. Amazon, for instance, called Republicans’ actions last week an “unacceptable attempt to undermine a legitimate democratic process.” Yet for two of the last three years, Amazon, which spent hundreds of thousands of dollars lobbying Congress and the White House for the Trump tax cuts, has enjoyed a negative effective federal tax rate. The online retail behemoth paid nothing in federal corporate income tax in 2018 or 2019, even as its profits soared over $11 billion. In 2020, Amazon owed just roughly 1.2 percent of its $13 billion profit in federal taxes—far below the 12 percent tax rate applied to the poorest Americans.

Verizon saved nearly $2.9 billion in taxes after lobbying for the 2017 bill. Walmart saved $1.7 billion after its own aggressive tax reform push. Bank of America pocketed $2.5 billion in tax savings thanks to the bill. The list of similarly situated companies who have suspended donations goes on.

“Everybody should be deeply skeptical.”

Some business leaders have suggested the political spending pauses may just be a first step, a way to acknowledge the situation and show some accountability, as Mark Weinberger, the former CEO of EY, the accounting giant, told CNBC this week. This week, Charles Schwab permanently shut down its corporate PAC. But other corporate PACs that have stopped giving to the lawmakers’ own campaign accounts have not announced a pause on donations to funding entities that directly support them, including the National Republican Senatorial Campaign Committee—which is led by Sen. Rick Scott, one of the lawmakers that voted against certifying Biden’s electoral victory—or the Republican Congressional Campaign Committee, the main fundraising arm for House Republicans, 139 of whom voted against certification.

The companies withdrawals also mean less in an era when corporate political giving represents a shrinking share of overall political spending: the Center for Responsive Politics estimates that only about 5 percent of money donated in the 2020 election came from corporate PACs, an “all-time low.”

Kelleher says the corporations’ announcements seem more like “a PR stunt” than a consequential stand. The first quarter after a presidential election is typically when corporate political giving is already the lowest, he notes, so it’s unclear just how much money the targeted lawmakers will actually lose. Many of the companies have been unclear about how long their suspensions will last.

And since Kelleher says large companies typically plan their political giving a year or even two in advance, the cut-off lawmakers may not have actually been in the companies’ plans. “They know going into 2021 how much they have estimated they’re going to give, to who, and when. So let them disclose that information, and tell the public exactly which contributions they’re no longer going to make,” Kelleher says. “Until and unless they do that everybody should be deeply skeptical of the genuineness of what is so far a PR campaign.”