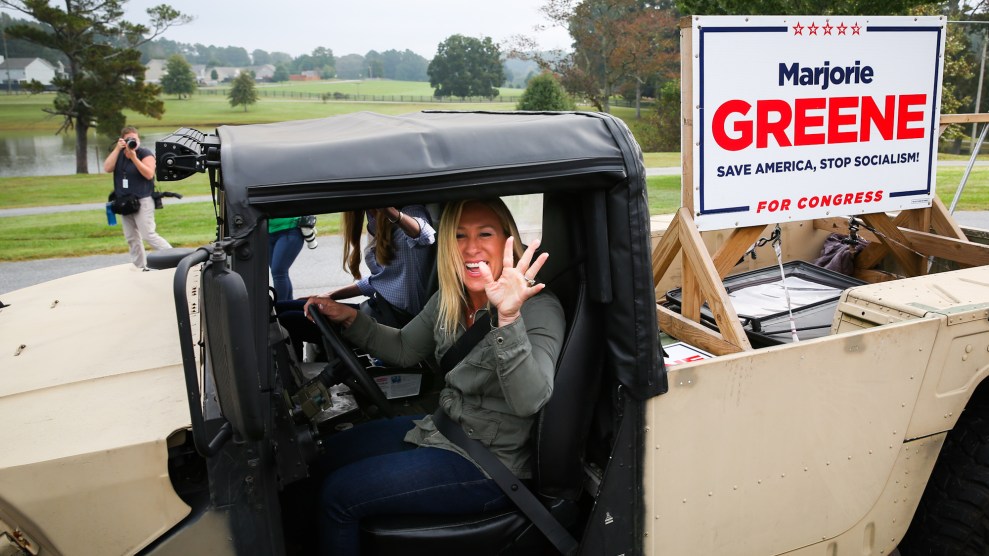 Before she was elected to the House of Representatives as a member from Georgia, Marjorie Taylor Greene, the Trumpy, QAnon-friendly, conspiracy-toting, gun-lovin’, mass-shooting-denying, assassination-promoting lightning-rod Republican, was a top official of the Family America Project, a right-wing outfit. In that capacity, she served as one of a handful of moderators of the group’s Facebook page, which has provided a forum for death threats against Democrats, bigoted attacks on the Obamas and others, and assorted conspiracy theories. The group has also championed the John Birch Society, a far-right conspiracist outfit that claimed throughout the Cold War that globalist and communist treason had penetrated the highest levels of US government.

Under her watch, the group served as a platform for some of the right’s darkest notions.

Greene’s official congressional biography proudly identifies her as the onetime national director of the Family America Project, which describes itself as a “national umbrella organization connecting, uniting, and informing statewide grassroots groups and activists; working together and mobilizing to support President Trump [and] American roots and culture.” The group was founded in January 2018 and is headed by Genevieve Peters, a veteran conservative activist who calls herself a “Christian, passionate President Trump supporter & constitutional defender.” Peters, an ardent coronavirus conspiracist, may be best known for a viral video from May capturing her refusal to wear a mask inside a California Trader Joe’s store.

Much of the group’s political activity has been standard conservative fare—opposing sanctuary cities and abortion rights, boosting Brett Kavanaugh and Amy Coney Barrett’s Supreme Court appointments. Its Facebook page promoted the January 6 march that led to the murderous raid on the Capitol. According to the page, Greene has been one of its 1,700 members for three years. While her bio does not specify what her duties were as the organization’s national director, the group’s page still lists her as one of just nine moderators.

Under the watch of Greene and that small group, the page has served as a platform for some of the right’s darkest notions. A 2018 post shared on the page contained an image of a noose with the superimposed words “If you want to make America great again, we will have to make evil people fear punishment again.” The poster added, “Start with Hillary and obama!” (Greene endorsed hanging Obama and Hillary Clinton on her own Facebook page that year.)

Another post from 2018 on the Family America Project page showed a Punisher skull with blood-red eyes: “God Will Judge Our Enemies. We’ll Arrange the Meeting.”

Other posts make clear that the group’s members considered their political opponents to be enemies of the nation and worthy targets of violence. A post with an American flag stated, “I will defend my country against all enemies foreign and domestic, including liberal Democrats.” Another said that “Some people need a caress…(Democrats) On the head with a hammer….Democrats The Evil Amongst US Seeking to Destroy And To Kill.” A 2019 message depicted the murderous psychopath from the movie Sling Blade holding a glinting weapon and saying, “I reckon I’ve had enough of this Democrat shit. How about you?”

The page has featured posts boosting a wide variety of conspiracy theories, including some related to QAnon. One declared “#pizzagate is real”—endorsing the nutty notion that Hillary Clinton and other top Democrats ran a pedophile ring out of a Washington, DC, pizzeria. One post claimed John F. Kennedy Jr., whose 1999 air crash death is questioned by factions of Q believers, was murdered in an act of sabotage. Billionaire George Soros, a frequent target of conspiratorial anti-Semitic attacks, was regularly discussed, with one post asserting he funds nearly all of “the Democratic liberal agenda.” Another falsely identified him as an “ex-Nazi billionaire” who has sworn to “Destroy the USA” and who “OWNS Antifa, most members of congress, Black Lies Matter, and Acorn.”

The conspiracist legacy of the Birchers shows that Greene’s loony paranoia is nothing new.

It goes on and on. There was a “16 Year Plan to Destroy America”—eight years of Obama to “weaken USA Globally,” followed up by a Hillary Clinton administration that would finish the job and “Destroy USA.” (Trump’s 2016 win foiled that plan.) According to the board’s posters, John McCain helped set up ISIS and Huma Abedin, a top Clinton aide, was a terrorist “plant.” A 2019 message warned the deep state was about to deploy “bio weapons on the military and whole cities if…[Trump] refuses to step down.” Another suggested nefarious forces backed Rep. Alexandria Ocasio-Cortez, observing that she “rose to power too fast out of nowhere to be a lone actor…She is not who she appears to be.” A few posts supported the racist birther theory that Obama was born in Kenya, with one insisting he is secretly Muslim.

The page also provided a home to racism and anti-Muslim bigotry. One post featured photos of presidents and their pets—and one of Trump with Michelle Obama: “These heartwarming images offer a rare look at recent US Presidents with the White House dog.” When Rep. Ilhan Omar, then Minnesota state representative, looked on track to be among the first Muslim women elected to Congress, a video posted on the page decried the victory, and a commenter noted, “We don’t want Muslims in our government. Our parents and grandparents didn’t fight for this. We might have to!”

In mid-2018, Peters, who serves as the page’s administrator, published a post with an hour-and-a-half-long video of a John Birch Society meeting in Southern California. She endorsed the far-right group as the “organization that started the fight to get us OUT OF UN. They educate on AMERICANISM to keep America FREE AND CONSTITUTIONAL!” In the video, which Peters described as “Not for PUBLIC Sharing,” a Birch official warns a small audience about a “cabal of ruling elites that are seeking an unrighteous dominion over this planet through the creation of their New World Order, world government.” In comments alongside the video, Peters gushed that it “gets me inspired to keep uniting and connecting.”

In the 1960s, William F. Buckley, the longtime publisher of the National Review and a leading light among conservatives, sought to drum the John Birch Society out of the movement. This paranoia-driven conspiracist organization considered both President Dwight Eisenhower and the US civil rights movement to be agents of a global, Kremlin-controlled Communist plot. Buckley feared their crackpot theories were dangerous and would taint Republican political candidates.

Despite Buckley’s efforts, the conspiracist legacy of the Birchers has continued to find adherents on the right and among Republicans. Greene’s loony paranoia—calling the Parkland, Sandy Hook, and Las Vegas shootings “false flag” operations, claiming Jewish space lasers caused California wildfires—is nothing new. It’s the continuation of a trend that has infected and at times been exploited by the Republican Party and the broader conservative movement for over half a century. (Look at Trump and birtherism and his rants about the deep state.) Last year, as Peters and the Family America Project protested lockdowns and mask-wearing, the group’s Facebook page spread a meme citing something called “The Plan,” which suggested that unidentified forces would use COVID to deploy UN troops to take control of US cities.

Since Trump lost the November election, the Family America Project timeline has been full of material supporting the baseless claim that his victory was stolen. The group organized to bus Trumpers to Washington for the January 6 rally held to pressure Congress to overturn the results. After that day’s violent assault on the Capitol, Peters posted a video of herself walking DC’s empty streets at night while wearing a VIP badge from that morning’s rally. She reported that she had been at the Capitol during the attack: “We got right up front…We were right up at the stairs.” She was quite delighted by the event: “It was an amazing show of force, an amazing show of patriotism. Everything you would want. We felt incredibly proud.” She continued, “We had completely controlled the entire Capitol…I have tons of pictures…There’s no question, no question that we didn’t send a very strong message about not accepting this fraudulent election.” Peters claimed “the only ones that weren’t peaceful were the Capitol Police.”

Neither Greene’s congressional office nor Peters responded to repeated requests for comment regarding the Family America Project, Greene’s role with the group, and the content of its Facebook page.

Though Greene’s bio suggests she is no longer a Family America Project official, her personal account still has moderator powers on the page, where her own content, including her Facebook live videos, regularly appears. On Tuesday, as House Democrats continued to call for her removal from a key committee or her expulsion from the body, and Senate Republicans followed the lead of Sen. Mitch McConnell in denouncing Greene, the page featured a video from her soliciting campaign contributions. She claimed a “radical unhinged mob” was focusing “its intense hatred” on her now that Trump was out office. Echoing the former president, she complained of a “disgusting witch hunt.” She asserted she had “nothing to apologize for”—that reporting on her past comments were media lies and smears. “A few of these things come from a few simple Facebook posts and a few simple comments from years back,” she said. But now Democrats and the media were mounting a vicious and fierce plot against her. As she often does, Greene saw a conspiracy—and she was its target.