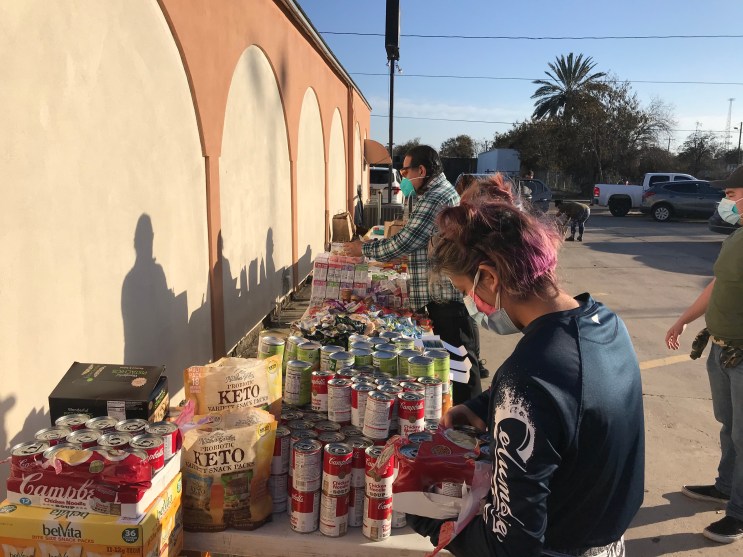 Mutual aid networks in Laredo have provided food to Texans during the winter storm.Red Wing United

As sweeping power outages and sub-freezing temperatures stripped millions of Texans of fresh food or heat, causing an unknown number of deaths, Marco Lopez, an organizer with South Texas–based community organization La Unión del Pueblo Entero (LUPE), thought to call a woman he knew in the Linda Vista colonia, an unincorporated border community. As it turned out, she didn’t have light or water, and had been cooking on a makeshift stove she’d built outside. Her car had broken down, so she was stuck at home—and even if she could drive, the nearest Walmart was closed.

“I was like, holy crap, I need to give her some food, pobrecita,” Lopez said. The two went to eat and buy tortillas, a pack of which she gave to the mechanic fixing her car.

With many state and local politicians falling down on the job of disaster relief, mutual aid networks and organizations like LUPE have been helping cold and hungry Texans. For Lopez, helping residents in colonias has been a top priority. He said the LUPE team has distributed food and gift cards in colonias like Linda Vista and Flaco Chiquito.

This is the second weather crisis to hit parts of Texas in the past year. In July, Hurricane Hanna hit the Rio Grande Valley, causing flooding and power outages.

“Every time these things happen, it stresses me out,” Lopez said. “because like, who do you pick when everybody needs?”

Helping neighbors is a reflex in Mexican American communities, advocates said. Silvia Castaños and Alec Martinez with Red Wing United in Laredo have been taking part in mutual aid efforts during the week even though they lacked electricity themselves.

“You ask any one of those people—because you know, most of Laredo doesn’t have a formal education, very poor—what mutual aid is, and they won’t know what you’re talking about,” Martinez said. “To them, it’s just being a good neighbor. It’s second nature to working-class people and I think especially Hispanic people.”

And while they credit their council member, Alyssa Cigarroa, and their state senator, Judith Zaffirini, for joining in the mutual aid efforts, the response from other Texas politicians has disappointed them.

“This is very frustrating, because we elect these people into positions of power, and then they fly to Cancún,” Castaños said. “Ted Cruz did nothing for Texas, and Beto O’Rourke and AOC were raising millions and checking up on elderly people.”

It’s not just Cruz who has been absent. San Antonio leaders like Mayor Ron Nirenberg and Bexar County Judge Nelson Wolff have reportedly heard from the White House, but not from Texas Gov. Greg Abbott:

Even when mutual aid efforts involve city or state government, organizers are skeptical of their government’s ability to act quickly.

“There were so many dead ends when we tried to leverage those institutions,” Martinez said. “It got caught up in bureaucracy, and by the time they get up and running, it’s too late, right? Like people have been sleeping in 20-degree weather.”

Even those who make it to a warm hotel face hurdles. Bobby Cooper with Austin Mutual Aid said his organization has paid for hotels all over the city, only to see unhoused people get kicked out of their rooms.

“It’s dangerous, and there’s going to be repercussions for that,” Cooper said. “It’s literally throwing people out that we already paid for the rooms—in the middle of the night.”

In Fort Worth, Lizzie Maldonado, director of the mutual aid collective O.D. Aid, has also been conducting outreach for the unhoused. As the storm approached, Maldonado provided winter gear to unhoused people at multiple encampments across the city.

But the city delayed opening a warming shelter, Maldonado said—and once the shelter was up and running, it was mutual aid that got people there.

“It definitely reminds us that we keep each other safe,” Maldonado said, “and not the state or the city.”