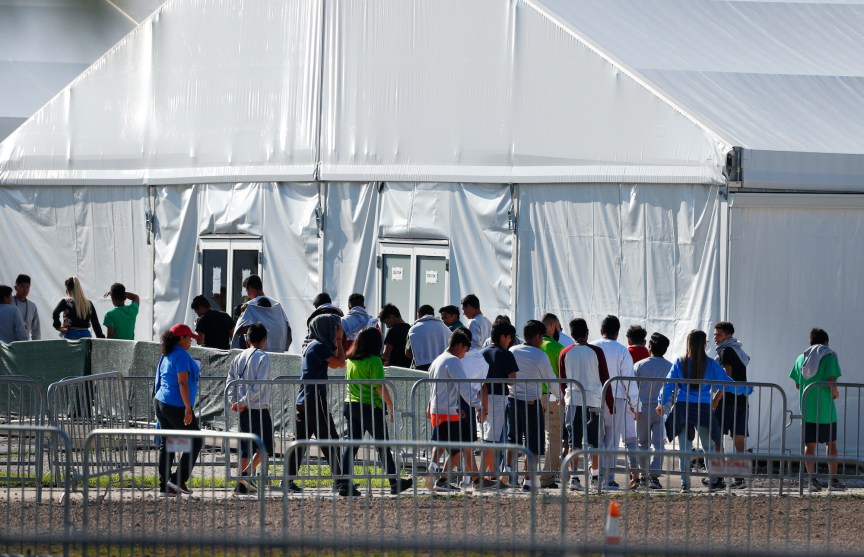 Children line up to enter a tent at the Homestead Temporary Shelter for Unaccompanied Children.Wilfredo Lee/AP

On June 28, 2019, then-Sen. Kamala Harris visited the Homestead temporary shelter for migrant children in South Florida. The facility had been in the news following shocking allegations of sexual abuse and prisonlike conditions, and Harris was in town with several other Democratic presidential candidates to denounce the site and the Trump administration’s harsh immigration policies. Detaining children, particularly in such dire conditions, “is a human rights abuse being committed by the United States government,” she told a small crowd. Harris later described seeing “children lined up like prisoners” as heartbreaking.

A few months later, Homestead shut down under mounting public pressure. Thousands of children and teenagers had passed through over roughly two years; at the time of its closure, it was the country’s largest for-profit temporary holding facility for unaccompanied minors, who are placed under the care of the Department of Health and Human Services’ Office of Refugee Resettlement after being apprehended at the border. Despite the fact that the Trump administration terminated its contract with the company running the facility, advocates were wary: The feds had kept Homestead in “warm status,” meaning it could be reactivated at any time.

Now, faced with a sharp increase of unaccompanied child migrants arriving at the US-Mexico border, the Biden administration is considering doing just that. The Miami Herald reported that the feds might reopen the Homestead site under the name Biscayne Influx Care Facility, an announcement that has caused outrage among advocates working towards ending the detention of children altogether. “That place has a history of all kinds of abuse and profiting off the lock-up of children,” said Lis-Marie Alvarado, program director of the Miami-based organization American Friends Service Committee (AFSC), which led the call for Homestead’s closure in 2019. A move to reopen the facility is “appalling and a slap to our faces,” she said.

“That place has a history of all kinds of abuse and profiting off the lock-up of children.”

Homestead first opened as a temporary shelter in 2016 under President Barack Obama, closed the following year, and was reactivated in 2018. Between March 2018 and August 2019, it housed more than 14,300 unaccompanied minors ranging from 13 to 17 years old, including dozens who had been torn from their parents under Trump’s policy of separating families. The average length of stay in the facility was 52 days by March 2019, with some minors spending almost four times as long.

After touring Homestead in April 2019, Amnesty International released a 41-page report recommending that the government shut it down as soon as possible, citing concerns about prolonged detention, overly controlled daily schedules, inadequate access to education and language services, and underreported instances of sexual abuse. There have been at least seven allegations of sexual abuse in the facility, including two involving staff. In 2017, a former Homestead youth care worker was sentenced to 10 years in prison for “attempting to coerce and entice an unaccompanied alien minor to engage in illicit sexual activity.”

On top of their concerns about Homestead’s troubling past, advocates like Alvarado continue to be worried about the facility’s proximity to a Superfund site, the Homestead Air Force Base. In August 2019, a report by the nonprofit environmental law organization Earthjustice and AFSC found the environmental conditions at Homestead “posed potentially serious health and safety threats” to the children, “including possible exposure to toxic chemicals.” The facility, according to the study, sits within two-thirds of a mile from eight hot spots with 16 different sources of contamination. Metals such as lead and mercury, arsenic, pesticides, and volatile compounds—many of which are carcinogenic and can cause chronic health issues—have been found in the soil and groundwater.

A 2019 report found the environmental conditions at Homestead “posed potentially serious health and safety threats” to the children, “including possible exposure to toxic chemicals.”

Back then, the coalition called for environmental tests to be conducted to determine the safety of the land where the shelter sits. But researchers say records recently obtained via freedom of information requests with the Environmental Protection Agency, HHS, and the Department of Labor (which licenses the property to HHS) indicate that no testing has been done. They have also asked the Air Force for cleanup records and information on claims from service members and nearby residents of chemical exposure, but have yet to receive an answer after 19 months. A 2018 environmental assessment of the site for the DOL mentions the presence of radon, lead-based paint, asbestos, and mold. “There’s no way to know if it’s safe for children or anyone to be there,” said Emma Shaw Crane, a doctoral candidate at New York University who contributed to the coalition’s research.

The Biden admin is reopening the detention camp for migrant kids in Homestead, Florida. This camp was shut down in 2019. My collaborative research with @afscfl @WeCount_Fl @Earthjustice shows that the site is contaminated with military waste (1/5) pic.twitter.com/Zt0Qc3XGjS

The 2019 report further noted that the shelter, which once had the capacity to hold upwards of 3,200 unaccompanied minors, neighbors the Homestead Air Reserve Base runway. Exposure to excessive noise from the jets, it argues, could lead to cognitive impairment and other negative long-term effects for children. At the time, advocates and lawmakers also denounced the lack of a hurricane evacuation plan, which the federal government produced after months of public outcry. Homestead is located in one of Florida’s most vulnerable hurricane zones.

“That location shouldn’t be used for anything,” Alvarado said.

During a press briefing this week, Homeland Security Secretary Alejandro Mayorkas wouldn’t label the increase in numbers of unaccompanied minors coming to the border as a crisis, choosing instead to frame it as a “challenge” and adding that “it is the best interest of the child that really define our actions.”

ORR, the agency in charge of migrant children arriving without a parent or legal guardian, operates a network of state-licensed shelters across the country to house minors as they wait to be reunified with an approved sponsor while their immigration cases proceed. As a result of a 1997 court settlement known as the Flores Agreement, the government is required to place these children—many of whom are fleeing violence in Central America—in the “least restrictive” setting possible.

The agency has contracts with nonprofit and for-profit organizations to run 200 facilities housing about 13,200 beds. When the number of children apprehended at the border and referred by the Department of Homeland Security spikes, ORR relies on temporary emergency influx shelters for extra housing. That’s where a facility like Homestead comes in: Unlike other dormitory-like shelters, these sites look more like warehouses or military tents and can be operated on federally owned land, where they are not subject to state licensing standards of care and oversight.

Unlike other shelters for migrant kids, sites like Homestead look more like warehouses or military tents and can be operated on federally owned land, where they are not subject to state licensing standards of care and oversight.

It remains unclear how or by whom the rebranded Florida facility will be operated, if and when it reopens. In the past, the site was run by Comprehensive Health Services, a company owned by the conglomerate Caliburn International, under a no-bid $341 million contract. In May 2019, former White House chief of staff John Kelly joined Caliburn’s board of directors. In his previous role as secretary of the Department of Homeland Security, Kelly was an early proponent of Trump’s “zero-tolerance” policy.

The Florida facility is not the only temporary shelter for unaccompanied minors the Biden administration is reportedly planning to bring back. Last week, a former camp for oil field workers in Carrizo Springs, Texas, reopened with 700 beds, which the White House says was necessary to continue to admit the growing number of arriving children while reducing shelters’ occupancy rates to keep with COVID-19 protocols. As of February 28, 2021, 7,700 unaccompanied minors were in ORR custody. “Our hope and expectation is that won’t stay open very long, that we’ll be able to provide for every kid who comes across the border safely to be housed in a facility that’s licensed,” President Joe Biden said about Carrizo Springs during a recent interview with Univision.

The Carrizo Springs opening came just as the White House began taking measures to expedite the release of children to screened sponsors and to shutter two Texas family detention centers run by DHS, as well as to release all families from a similar facility in Pennsylvania.

But advocates still worry that once Carrizo Springs reaches maximum capacity, the government will turn to Homestead next and that a short-term fix could become the norm again. (Florida-based groups are starting to see changes being made to the outside of the facility, including fresh paint on the walls covering its old name, “Homestead Branch.”) Advocates argue influx facilities should be a last resort, especially when operated by for-profit contractors with a history of violations and without experience in providing appropriate care to children.

AFSC’s Guadalupe de la Cruz says the government should look into community-based housing alternatives such as residential shelters run by faith-based organizations and supported by local nonprofits. “We don’t think a mass style of detention is the way to go under a pandemic,” she said. De la Cruz and Alvarado are among several advocates pressuring local and national politicians to take a stand to prevent the temporary shelter from reopening. A few, including Alexandria Ocasio-Cortez and Julián Castro, have spoken out against sending kids back to these kinds of facilities.

We should not go in this direction again.

HHS-ORR should place these children in a home more quickly. Invest in personnel and policy to speed up placement. It’s safer, cheaper, and is in the children’s best interest. https://t.co/dU6JL58f1r

“I think a lot of promises have been made so far and have been broken,” Alvarado said. “A detention is a detention, a cage is a cage. That is not the way.”