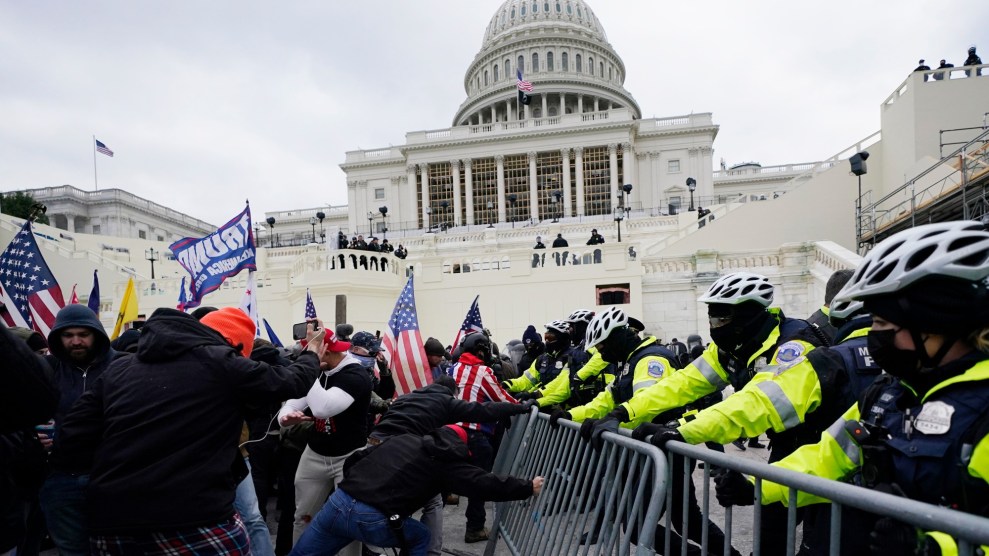 On January 6, as thousands of violent Trump supporters breached the security perimeter of the US Capitol Building, Capitol Police Chief Steven Sund placed a “frantic call” to DC National Guard Maj. General William Walker asking for backup to help with the escalating situation.

“He informed me that the security perimeter at the Capitol had been breached by hostile rioters,” Walker told lawmakers on Wednesday during a Senate probe of the security failures on Jan. 6. “Chief Sund, his voice cracking with emotion, indicated that there was a dire emergency on Capitol Hill and requested the immediate assistance of as many Guardsmen as I could muster.”

But the “immediate assistance” never came. According to Walker’s testimony, it took more than three hours for him to receive authorization to send in Guardsmen to assist the situation at the Capitol, by which point violent Trump supporters had already broken into the building and wreaked havoc in the halls of the Capitol. Walker testified that after speaking with Sund, he immediately relayed the request to Army senior leadership, who had to get approval from Acting Secretary of Defense Christopher Miller—a Trump loyalist who had been placed in the role only two months prior. It wasn’t until 5:08 p.m.—a 3 hour and 19-minute wait—that Walker received approval to mobilize the Guard, who he says had been sitting in buses all day waiting for the message to deploy to the Capitol.

The long delay to approve sending in the National Guard has been at the center of the Senate’s investigation into the securities failures that led to the events of Jan. 6. While Walker’s testimony cleared up some of the confusion as to who bears the responsibility for the delay, it also raised more questions about the reason behind the response. Walker said that the delay in receiving approval to mobilize his Guardsmen was “unusual,” especially considering that he had received “immediate approval” to send in the Guard to Black Lives Matter protests in DC over the summer.

here's William Walker, the DC National Guard commander, explaining why the instructions he got in the days before the January 6 insurrection were "unusual" pic.twitter.com/3o5jiVqMzl

It’s still unclear why, exactly, Miller and Army senior leaders delayed approving the request. According to Walker, during a call with Army senior leaders, their reluctance to send in National Guard was because they “did not think it would look good” because “it could incite the crowd.” One of the Army senior leaders on the call, according to Walker, was Lt. Gen. Charles Flynn, the brother of Trump’s former National Security advisor who was convicted of lying to the FBI and had been pushing Trump’s conspiracy theories that the election was rigged. The Army had previously denied that Charles Flynn was on the call.

Walker added that, had he gotten approval earlier, he could have sent 155 Guardsmen to the Capitol hours earlier, which he told lawmakers he believes “could have made a difference” in what transpired that day.