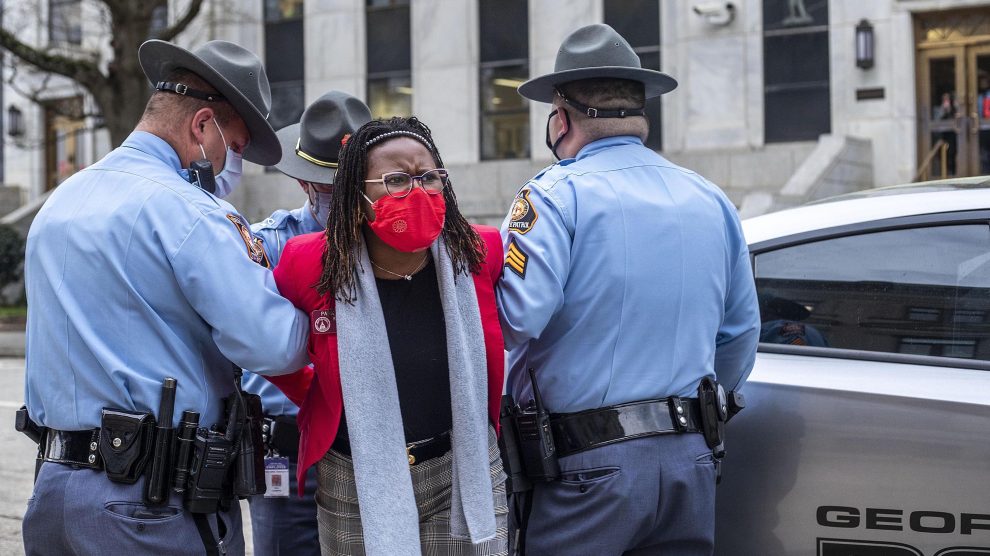 The internet erupted on Friday after Park Cannon, a Black Georgia state representative, was arrested the day before for knocking on the door of Gov. Brian Kemp’s office. She was knocking because the governor was in the midst of signing legislation that critics, among them President Joe Biden, have derided as a 21st century version of “Jim Crow,” as the changes it puts in place appear intended to curtail the right of Black Georgians—and Democrats—to vote. (Some critics pointed out that Kemp was flanked by white men during the ceremony, and a painting of a plantation hung on the wall behind him.)

I was proud to sign S.B. 202 to ensure elections in Georgia are secure, fair, and accessible. I appreciate the hard work of members of the General Assembly to make it easy to vote and hard to cheat. pic.twitter.com/1ztPnfD6rd

Cannon, who was charged with obstruction and disrupting the General Assembly, had been protesting the closed-door signing of the contentious bill. Video posted on social media shows her being arrested by Georgia State Patrol officers after gently rapping on the door to Kemp’s office.

“Why are you arresting her?” This Facebook Live video from @TWareStevens shows the moment authorities detained state Rep. Park Cannon as @GovKemp was behind those doors signing elections restrictions into law. #gapol pic.twitter.com/U1xMJ6tZrY

Cannon’s arrest marked the second time Georgia law enforcement has arrested a Black female elected official for demonstrating to demand fair elections. In 2019, Senator Nikema Williams was arrested inside the Capitol Rotunda while protesting vote counts. The charges against her were ultimately dropped, and she sued the Georgia Department of Public Safety, claiming her arrest was unconstitutional.  Cannon, released from jail later on Thursday, tweeted that she was arrested for resisting voter suppression.

Hey everyone, thank you for your support. I’ve been released from jail. I am not the first Georgian to be arrested for fighting voter suppression. I’d love to say I’m the last, but we know that isn’t true. #SB202

On a Friday afternoon, I managed to catch up with four members of the Georgia Legislative Black Caucus to get their take on their colleague’s arrest. The following are their words, lightly edited from our conversations.

I found that arrest to be disturbing. Here we have an elected official and a colleague arrested only because she had questions to pose to another elected official about his lack of transparency as he was signing [SB 202.] And I think my real issue about this is, this comes after we saw a violent insurrection happen against our [US] Capitol where a police officer died. We had thousands of people intent on doing harm. Rep. Cannon—that was not her! That’s not what she was trying to do. She was duly elected to represent the people in her district. She had every right to be in the [state] Capitol. That is her house, that is her place of work. I stand with her as a colleague. I know she is a fighter for truth, and I am just praying that she finds justice out of this ordeal. Honestly, those officers…I think they overstepped, and there should be some repercussions.

Representative Cannon might be targeted, whereas a white woman probably would not have been treated in the same way. I honestly think that is true. What I see down at the Capitol a lot, even within my Senate colleagues, is a willingness to silence women and people of color. I see that happening in various subversive kind of ways, but it does happen. So yeah, I absolutely think there is a some structure of discrimination and a climate of discrimination and what could be construed as abuse of power down there.

We were hoping that officers would allow for the public to at least be able to organize and protest in a manner that was certainly peaceful, certainly nonviolent. They’ve come to the Capitol, maybe they have elevated voices, have signs, but never incidents of violence. They’ve never been violent towards any officers. And so it was really surprising yesterday, and there are misdemeanor charges of obstruction, but [Cannon] wasn’t charged with a misdemeanor. To crank it up to a felony was just really wrong.

[Cannon] is certainly not one to restrain her voice when she feels that she needs to be heard. She talks very firmly. She’s very confident and strong; she is someone that many women and men look up to. And we admire because he has very strong convictions. She’s able to speak her mind. And we were hoping that should she want to discuss further the ramifications of Senate Bill 202 with Governor Kemp, or with lieutenant governor Jeff Duncan, or any of the staff persons—knowing Rep. Cannon, it may have been a very heated conversation. But this is a very controversial bill. And that would be par for the course. However, I’ve never known Representative Cannon to be violent, never known her to be so obstructive that she would need to be charged with a felony. That’s an absolute overcharge! It undermines the work, the legitimacy and the professionalism of our police at the Capitol. There were better ways to handle that. De-escalation should not mandate a felony arrest simply for a knock on the door.

I don’t think [Cannon’s arrest] was a proper response to her wanting to have access to the room where the bill is being signed. It puts us in a state of Jim Crow. The Georgia Legislative Black Caucus specifically pushed back on this type of legislation, and to have a legislator arrested?? [The Republican rule changes] are a blatant attempt to undermine our democracy, our vote, our electoral process. They are a nefarious, concerted national effort to suppress the vote of millions—and it’s not just Georgia but other states that are trying to do this type of legislation. They’re trying to create a solution to a problem that does not exist! It does not exist for the general public; it exists for a particular party. This is just a reaction to a win that upset a political party, based on the fact that they have been used to being in power.

Park Cannon’s arrest was unfortunate when there are criminals in the street violating our citizens, and we are arresting legislators who are simply trying to either defend your right to vote or simply have access to viewing one of our ceremonies! The whole situation is unfortunate, and I look forward to seeing how the case move going forward. We have to be careful about what precedent we set, because we don’t want to continue to have nonviolent protesters—whether they are legislators or not—getting arrested when it is their right to have their voices heard.