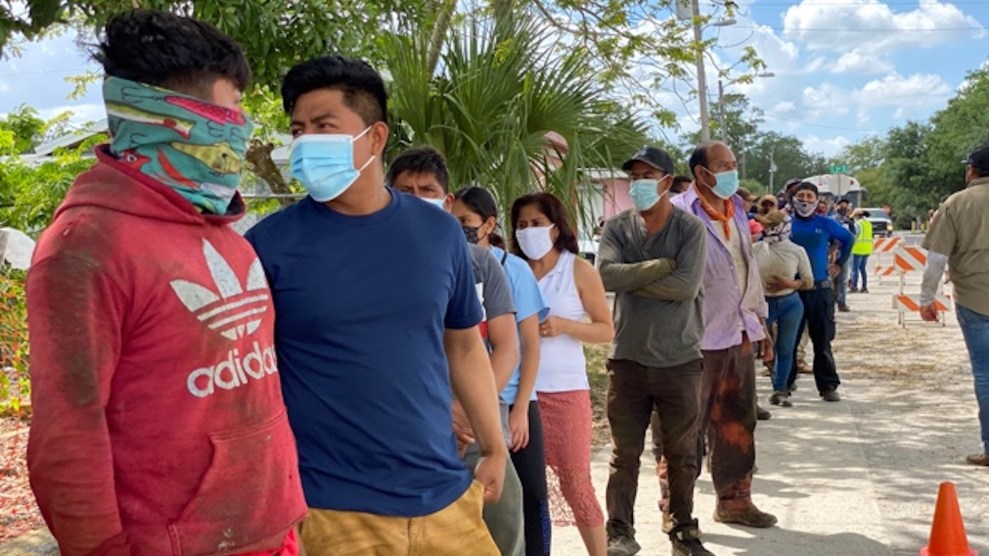 Farmworkers in Immokalee, Florida, queue up for the COVID vaccine in March. Coalition of Immokalee Workers

During the pandemic, some 5 million undocumented immigrants counted as “essential” workers, toiling to keep the food system humming so that tens of millions of other people could safely carry on with their jobs while sheltering at home. These immigrants occupy a dual position in the United States: On one hand, under Democrats and Republicans alike, they have for decades faced a militarized, treacherous border and the constant threat of deportation. On the other, they’re relied on to carry out vital tasks like feeding the nation as 30 percent of the country’s farmworkers and cleaning its messes as 20 percent of its house cleaners.

Former President Donald Trump—who sought to make life hell for undocumented people even as he relied on them for labor in his resorts—pushed this contradiction to an extreme. Can a post-MAGA Washington create just, sane policy for the nation’s undocumented workers?

The bill is a “tough compromise,” Costa says. Perhaps not surprisingly, it has divided farm worker advocates.

For the 358,000 undocumented farmworkers and their families now in the United States, the answer is: maybe. For most of the other 10 million undocumented people here, the chances for relief from fear of deportation remain pretty low.

The holdup is the Senate, split 50–50, with Vice President Kamala Harris holding the tie-breaking vote. Because of the filibuster, passing bills not directly related to budget issues effectively requires 60 votes (i.e., no fewer than 10 from Republicans). As the GOP morphs evermore into the party of Trump, finding 10 Republican senators willing to grant decent treatment to the immigrants who feed them will be nearly impossible.

The Farm Workforce Modernization Act, introduced by Rep. Zoe Lofgren (D.-Calif.), would change things for a large swath of undocumented farmworkers. It would grant them five-year renewable visas with an option for permanent legal status after eight years. The bill first emerged in 2019 when it passed the House 226–165—with 34 Republicans voting in favor—before dying without a vote in the then-GOP-led Senate.

Rep. Lofgren reintroduced it this year, and on March 18, FWMA won passage in the House by a vote of 247–174, with 30 yea votes from GOP members. So far, it has not been scheduled for debate in the Senate. Some advocates think it has a fighting chance to draw enough Republican support in the upper chamber to beat the filibuster and pass.

That’s because it includes something near and dear to certain GOP lawmakers: It would expand the H-2A guest worker program, a favorite of farmers in regions with large-scale fruit and vegetable production, like the West Coast and the Southeast. Farm owners tend to favor the H-2A program because it supplies them with workers on temporary visas. Guest workers are beholden to the farmers who contract them, toiling in a kind of lump-it-or-leave-it arrangement—they can’t seek other employment, and have to return to their home country when their visa dictates.

Guest workers are “routinely cheated out of wages, forced to mortgage their futures to obtain low-wage, temporary jobs, and held virtually captive by employers.”

This power imbalance leaves them open to abuse. In a 2013 report, the Southern Poverty Law Center concluded that guest workers are “routinely cheated out of wages, forced to mortgage their futures to obtain low-wage, temporary jobs, and held virtually captive by employers.” The report adds: “If guest workers complain about abuses, they face deportation, blacklisting or other retaliation.” In her 2018 dispatch from California wine country, Mother Jones’ Maddie Oatman found that guest workers there frequently live in isolation, often “prohibited from receiving visitors” at their farmer-supplied living quarters. My colleague Fernanda Echavarri has more on the fundamental injustice of the H2A program in this recent interview with Evy Peña, the communications and development director of the Mexico-based NGO Centro de los Derechos del Migrante.

Farms in the US have become increasingly reliant on H-2A workers; annual visas issued under the program rose from around 32,000 in 2005 to more than 134,368 in 2016. Under Trump—whose ag secretary, Sonny Perdue, loved the program—it swelled anew: In 2019, the government issued 204,000 H-2A visas, a 50 percent jump over three years. A July 2020 NBC News report documented continued grim conditions for many guest workers as the program expands.

According to an analysis by Daniel Costa, director of immigration law and policy research for the progressive Economic Policy Institute, the Farm Workforce Modernization Act would tweak the complicated system for setting minimum pay rates for H-2A workers in ways that will likely lower wages for most of them—a major goal of the agribusiness lobby.

On top of the wage change, the bill would open the H-2A program to more kinds of farms. Currently, the H-2A program only grants seasonal visas; it’s designed to draw in workers to, say, handle a region’s strawberry harvest. It leaves out operations that rely on steady year-round work, like plant nurseries and dairy farms, which now rely heavily on undocumented labor. These interests “have been clamoring for years for Congress to allow them to hire temporary H-2A workers for many of these 419,000 permanent, year-round jobs,” writes Costa.

The Farm Workforce Modernization Act would grant that wish, or at least start to. For the first three years, it would allow 20,000 H-2A visas for year-round jobs—meaning 60,000 after three years—and the cap can rise by 12.5 percent each of the several following years, and be eliminated altogether in year 10.

Such a gift to Big Dairy would put the workers it relies on in an unfair position, some immigrant advocates say. “Using a problematic temporary work visa program where workers are virtually indentured to their employers in order to fill permanent, year-round jobs…makes no sense, unless the goal is to keep workers employed in permanent jobs from having equal rights and fair pay,” Costa writes. The bill does open a path for a limited number of H-2A workers to gain green-card status, but they have to participate in the program for at least 100 days per year for a decade to qualify. “That’s far too long,” Costa adds. “Legislation that truly values the contributions of migrant farm workers should either allow them to begin their permanent agricultural jobs with green cards in hand, or to allow them to become eligible for green cards after one year in H-2A status.”

The bill would require farm enterprises to use the e-Verify system to confirm immigration status —which would make it extremely difficult for undocumented people to find farm work.

On top of its two major planks—paths to legal status for undocumented farm workers already in the US and grower-friendly changes to the H-2A program—the bill would require farm enterprises to use the e-Verify system to confirm workers’ immigration status going forward, which would make it extremely difficult for undocumented people to find farm work in the future. The result will likely be two-fold, Costa said. Some growers will simply hire and pay undocumented workers off the books, driving them further into the shadows of society and vulnerable to abuse. Others will rely ever more on the deeply problematic H-2A program for their labor needs, and it will emerge as the main mechanism for supplying immigrant labor to US farms.

All in all, the bill is a “tough compromise,” Costa says. Perhaps not surprisingly, it has divided farm worker advocates.

California-based United Farm Workers union and D.C.-based Farmworker Justice, both of which participated in negotiations to craft the bill, vigorously endorse it. The bill “honors the professionalism of those who feed the entire nation and much of the world. It is the result of thoughtful compromise among bipartisan lawmakers, agricultural employers, and farm workers,” UFW President Teresa Romero said in a statement.

Bruce Goldstein, president of Farmworker Justice, acknowledges the concessions but stresses the urgency of improving conditions for undocumented workers. “To be able to come out of the margins of the society and be able to go with your kids to school for parent teacher conference, without being afraid that ICE agents are there at the school, watching for undocumented immigrants—that is just really important,” he said.

Many other advocacy groups reject it. The Food Chain Workers Alliance, a coalition of worker-based organizations, decries the eight-year waiting period for green status and the “huge concessions to the grower lobby by linking the H-2A program to immigration reform.” Familias Unidas por la Justicia, an independent farm worker union representing of Indigenous families in berry fields of Washington State, opposes it too.

In an emailed statement, a spokesperson for the Florida-based Coalition of Immokalee Workers, which organizes workers in Florida’s winter tomato fields, wrote that the bill “in its current form threatens to put US agriculture on an inexorable path to an all-H-2A workforce, institutionalizing as government policy an exploitative system of labor recruitment that no worker should be asked to endure.”

The tragedy is that even in Biden’s gentler Washington, DC, prospects for anything better look dim. “If the farm worker groups that are opposing the bill had the votes to pass a better one, we’d be working with them to pass it,” Farmworker Justice’s Goldstein said. “The votes aren’t there.” The irony is that the Farm Workforce Modernization Act itself, despite its concessions to GOP interests, might not have the 10 Republican votes it needs to pass, either.