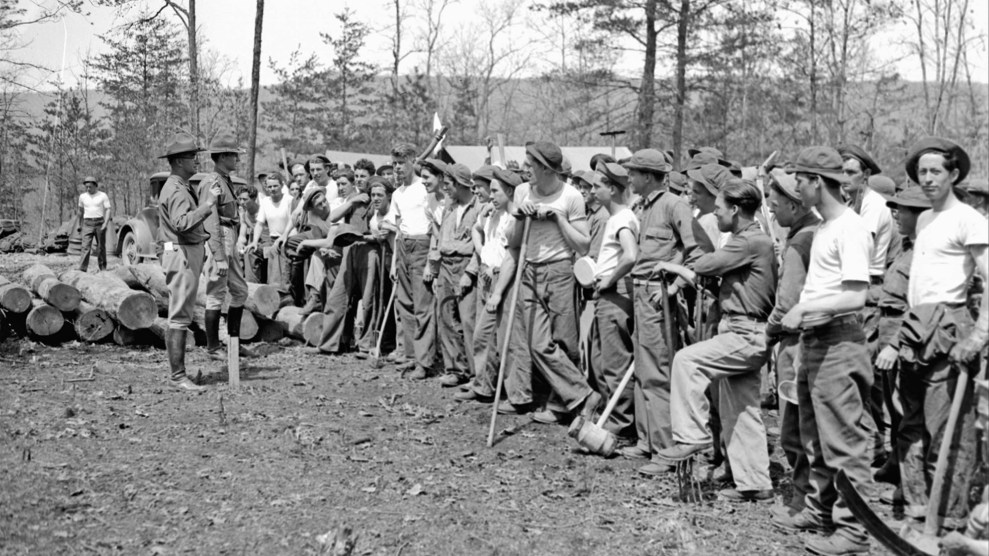 It’s December 2025, the end of a difficult year. Just a few months earlier, a massive hurricane destroyed dozens of homes in your town, even killed a few of your neighbors. Your house was fine, but you lost power for weeks. The waterfront park where you liked to eat lunch between shifts as a cashier is underwater. Trees are still down, and mudslides cover several roads, making it basically impossible to pick up the extra money you made driving an Uber.  Despair starts to eclipse the guilt you feel for surviving the storm.

Then one day you’re scrolling your social media feed and see an update from one of your friends. She’s replanting native trees in the park and helping restore the wetland that once absorbed storm surge before developers drained it to build some beachfront McMansions. She’s earning a better wage than you are and receiving on-the-job training from a local union. You text her, asking how she got the gig. She sends you a link to the Civilian Climate Corps homepage.

That federal program does not yet exist. But that’s how Becca Ellison, the policy manager at the climate group Evergreen Action, envisions the concept that’s quickly gaining traction in Washington, D.C.

Last month, the Biden administration asked Congress to provide $10 billion as part of its $2 trillion infrastructure package to get a Civilian Climate Corps off the ground. On Wednesday, Evergreen released a 20-page report outlining for the first time how the federal government could feasibly create such a program.

As its name implies, the new CCC would hark back to a similar program, the New Deal-era Civilian Conservation Corps. Starting at the peak of the Great Depression in 1933, the original CCC put up to 300,000 Americans (mostly young white men) to work planting billions of trees, digging flood-control channels and cutting hiking trails in public parks for the equivalent of more than $600 per month in today’s dollars.

The new corps described in Evergreen’s memo, shared first with HuffPost, takes a far more ambitious approach. The program would be five times bigger, employing about 1.5 million Americans without the age cap or racial and gender restrictions that limited the original CCC.

It would take on a much more expansive portfolio, including installing solar panels and wind turbines, maintaining public transit systems, and retrofitting homes and buildings to be more energy efficient. It would offer Medicare health coverage, child care stipends and partnerships with labor unions to provide pre-apprenticeship education to enlistees.

“We’re trying to capture the ethos of the American spirit that’s been lost since the New Deal,” Ellison said.

It’d be a far cry from the rustic work camps set up on federal land in rural swaths of the country during the 1930s. Instead, the new plan aims to build modern federal campuses or offer rental vouchers near work sites. Unlike the original CCC, which Congress shuttered in 1942 as World War II shrank the pool of men in need of work, the new program would embed itself into the community fabric, providing grants to existing local programs and partnering with civic organizations to serve long-unmet neighborhood needs.

“The size, the efficiency, and the confluence of a strong role for government in alleviating unemployment with a commitment to important goals―that’s where the original CCC is a model, the general idea of it,” said Benjamin Alexander, a historian at the New York City College of Technology who wrote a book on the original program. “I stress ‘general idea’ because I think, for the most part, the potential similarities stop there.”

How It Would Work

The program would build off the model of AmeriCorps, the civic jobs program funded in part by the federal government. But it would pay better, take on a more centrally directed mission and help corps members plan for long-term careers.

Despite being the largest existing federal corps program, AmeriCorps employs only 75,000 volunteers per year, many earning a stipend of no more than $4,000 for up to 12 months of service. The CCC would pay 20 times more workers at least $15 per hour, plus benefits, and provide a Green Careers Network that would seek to train enrollees for permanent jobs and direct them to high-paying private employers. That provision actually echoes the New Deal corps, which provided enlistees with classes on agronomy, typing and forestry in the camps at night after the work was done.

The new career network would likely fall under the Department of Labor, which already administers apprenticeships and grant programs, such as the Workforce Opportunity for Rural Communities Initiative and the Job Corps.

The federal government is legally barred today from making the same mistakes of segregating its workers by race and gender that it did in the 1930s. But one of the other big problems the new proposal aims to avoid this time is clashes with local communities. Then-President Franklin D. Roosevelt put 11 CCC camps in New York’s Bear Mountain State Park, prompting a petition in 1935 from men in the area who complained that the projects threatened their land and excluded them from the work. Fearing bad publicity, Roosevelt shuttered the camps.

To avoid that problem, Evergreen called for the new program to establish an interagency Climate Workforce Council under the White House Council on Environmental Quality that would, among other things, solicit input on projects from local governments, labor unions and community organizations. Neil Maher, author of the 2008 book “Nature’s New Deal,” said the plan’s “emphasis on local communities’ input” was “the most impressive aspect.”

“In the 1930s, the local communities were very involved in local CCC camps: They visited, camps encouraged locals to visit and the young men went into town every week,” said Maher, a historian at Rutgers University. “But local people did not have control or say over what projects the corps was doing. That came from the federal government, and the projects were really top-down.

Jerry Apps, the Wisconsin historian and author of the book ”The Civilian Conservation Corps in Wisconsin: Nature’s Army at Work,” said Evergreen’s proposal blended the original CCC with the New Deal’s Works Progress Administration and called the paper “an excellent beginning.” But he criticized the proposal for failing to include agriculture projects as part of its vision.

“Climate change will affect agriculture and the world’s food supply more than any of us can now realize,” he said in an email. “CCC enrollees could, in a variety of ways, work to establish alternative farming strategies, vertical farming, and small acreage farming, food, clean air, clean water and well-tended soil are essential for survival.”

As a starting point, the Biden administration could expand those efforts at the Job Corps, beef up the Department of the Interior’s Public Lands Corps, and set new funding priorities for AmeriCorps to focus its efforts on energy efficiency, tree planting and ecological restoration.

Congress could then cobble together some Democrats’ existing bills to lay the groundwork for the CCC. Delaware Sen. Chris Coons’ COVID-focused CORPS Act provides a model for how legislation could focus existing corps efforts on a major problem. Illinois Sen. Dick Durbin’s RENEW Conservation Corps Act offers language on how the Climate Workforce Council could be established through a memorandum of understanding among its member agencies. Florida Rep. Frederica Wilson’s Youth Corps Act and Colorado Rep. Joe Neguse’s 21st Century Conservation Corps for Our Health and Our Jobs Act highlight pathways for increasing and cementing federal funding for the program.

“To combat the interlocking crises of the moment—climate change, racial injustice, a global pandemic, and income inequality—our government has an opportunity to modernize a great idea from the past and tailor it to meet the present and the future,” Sen. Ed Markey (D-Mass.) said in a statement. “The Civilian Climate Corps will provide an opportunity for millions of Americans from every walk of life to earn a good wage while serving his or her community and training to transform our economy.”

The report will likely receive attention from the new administration. President Joe Biden’s proposal to rebuild the nation’s infrastructure―recently dubbed by one columnist “a New Deal with green characteristics”―borrows heavily from the plans Washington Gov. Jay Inslee authored as part of his ill-fated but influential climate-centered bid for the 2020 Democratic presidential nomination. Evergreen was founded by former members of Inslee’s campaign. Maggie Thomas, a co-founder of Evergreen, recently left to serve as chief of staff to Biden’s domestic climate czar, Gina McCarthy.

The White House declined to comment on the specific proposal but confirmed the program was a priority for the administration.

Bipartisan Voter Support, But ‘No Such Luxury’ From Lawmakers

The program is expected to be popular. Among likely voters in October, 79 percent supported creating a Civilian Climate Corps, including 78 percent of Democrats and 84 percent of Republicans, according to polling by the left-leaning think tank Data for Progress.

Despite that widespread support, Alexander warned that Democrats’ slim majority in Congress and Republicans’ hyper-partisan opposition to Biden’s agenda present a much more challenging legislative process than the Roosevelt administration faced when passing the original CCC in 1933.

“Despite all the heated political rhetoric of the time, FDR was actually able to get quite a bit of bipartisan cooperation in Congress for New Deal experiments like the CCC,” Alexander said. “Biden today has no such luxury.”

The program could even face some blowback from progressives, who have already criticized the $10 billion Biden requested in March for a climate corps as far too little to make a difference. Ellison said the proposal “is a good down payment on what an ambitious Climate Corps could look like.”

“Congress could go further,” she said. “We think this program presents a huge opportunity to put Americans to work building a just, sustainable future.”