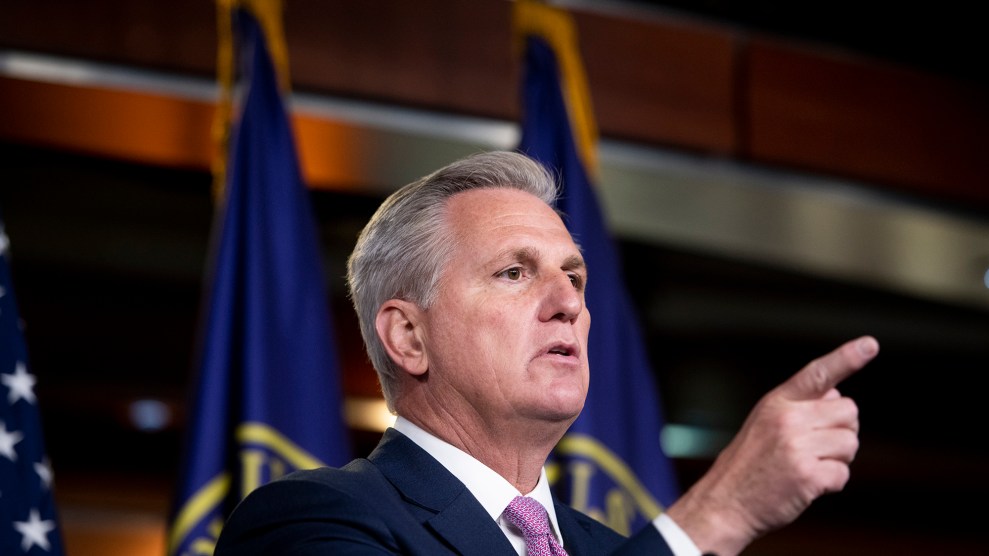 In an interview with Fox News’ Chris Wallace on Sunday, House Minority Leader Kevin McCarthy was asked again about a conversation he had with then-President Donald Trump during the Capitol insurrection on January 6. In the aftermath of the riot, McCarthy said that Trump “bears responsibility” for it, and suggested the president should face censure. “He should have immediately denounced the mob when he saw what was unfolding. These facts require immediate action by President Trump,” McCarthy said on the House floor the week after. (Of course, McCarthy himself voted to overturn the results of the presidential election in Arizona, legitimizing the theories of the rioters.)

He’s in a good position to know exactly what Trump thought about the insurrection as it unfolded. McCarthy spoke with Trump while the Capitol was under attack. And according to Rep. Jaime Herrera Beutler, a fellow Republican, Trump had said something pretty chilling: “Well, Kevin, I guess these people are more upset about the election than you are.”

But when Wallace asked McCarthy about his conversation with Trump, McCarthy chose to whitewash what happened. He refused to answer yes or no as to whether Herrera Beutler’s account was accurate—you can interpret what that means for yourself—but insisted that Trump 1) did not know the riots were going on until McCarthy called him, and 2) promised to put a stop to it.

“And that’s what he did—he put a video out later.”

Kevin McCarthy refuses to answer Chris Wallace's question about whether it's true that Trump told him, "Well Kevin, I guess these people are more upset about the election than you are" when McCarthy called and urged him to call off the insurrectionists on January 6 pic.twitter.com/cSYSPUs8OO

McCarthy is right in a very narrow way—Trump did put a video out later. A full two hours after a mob broke into the Capitol, he put out a video in which he told the people who had defaced the Capitol, shit in the floor, shouted racist slurs, and beaten cops, “We love you, you’re very special,” and that “we had an election that was stolen from us.”

For a brief period on January 6, it perhaps seemed as though there might be some cracks in the Republican party’s wall of support for Trump—as evidenced by McCarthy’s contemporaneous statements. But in the months since, all but a handful of figures (Herrera Beutler being one of them) have committed themselves to a whitewashing of what happened that day. McCarthy would rather cover up what happened and throw his own Republican colleague under the bus than tell the truth about what we all watched with our own eyes, and what he had admitted to initially. It is crushingly cynical, and sort of clarifying; then, as now, Trump’s greatest source of power was the sheer cowardice of those who could have stopped him.