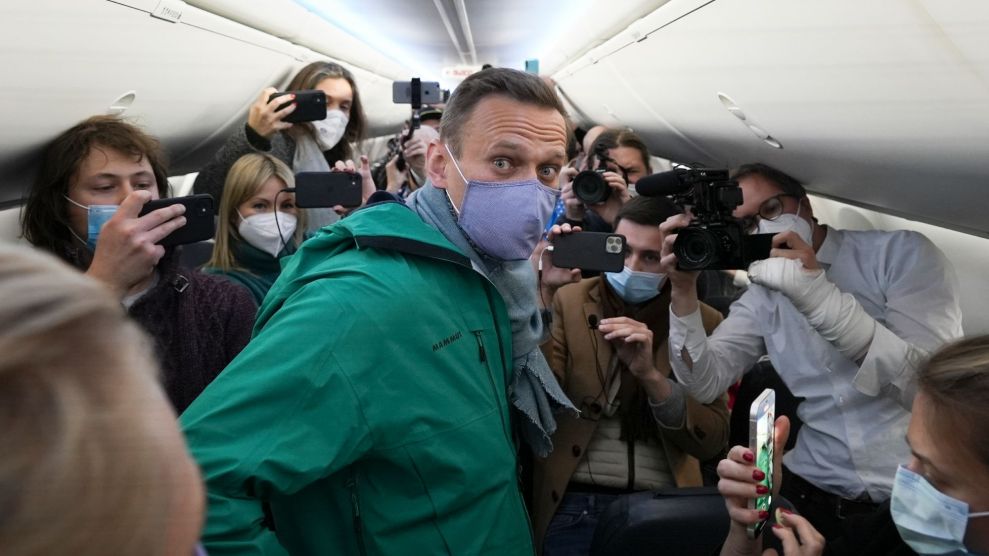 As the health of Aleksei Navalny, the imprisoned Russian opposition leader, deteriorates—with his allies warning he may be nearing death—his advocates in Russia and the West are calling for the Biden White House to take a bold step in countering Vladimir Putin: slapping sanctions on Putin’s oligarch cronies.

Navalny, who last year survived a Russian effort to poison him, was sent to prison in February on a 2014 conviction that the European Court of Human Rights ruled in 2017 was the result of an unfair trial. After not receiving medical care for severe back pain and the loss of feeling in his legs, he began a hunger strike. On Sunday, he was transferred from a penal colony to a prison hospital. His lawyer has reported he is in dire condition. His doctor noted he was at risk for kidney failure and cardiac arrest.

“The Biden administration must urgently hit at the heart of the Putin regime by sanctioning his top financial enablers.”

On Tuesday, Navalny’s Instagram account posted a statement from him in which he describes himself as a “skeleton…staggering around the cell” who, with a rolled-up court order, “pounds the mosquitoes sitting on the walls and ceiling.” The post notes, “These squeaking and biting creatures will kill a person faster than any hunger strike.” It adds, “There are a lot of people like me who have nothing but a mug of water, hope and faith in their convictions. Both in Russia and in the world…It is extremely important for them to feel your support and solidarity. It seems that this is not at all a lot and not difficult. But there is no better weapon against injustice and lawlessness.” The following day, UN human rights officials said Navalny’s life was at risk and called on Moscow to permit “his urgent medical evacuation from Russia.”

Thousands of Russians attended protests on Wednesday to demand Navalny’s release. Hundreds of protesters were detained by security forces. Two of his key allies were arrested. Days earlier, Russia’s general prosecutor filed a request to have Navalny’s Anti-Corruption Foundation and his regional offices declared “extremist” organizations, as if they were terrorist groups. This would basically outlaw his political movement. And this clamp-down is occurring as Putin is mounting a provocative military buildup along the Ukrainian border. During his annual speech to the national assembly on Wednesday, Putin warned against any nation threatening Russia, stating, “They must know Russia’s response will be asymmetrical, swift and harsh.”

The Biden administration’s response to Putin’s attack on Navalny has left some Navalny supporters wondering if Washington has taken sufficient steps. In early March, the United States and the European Union imposed sanctions on Russia for the attempted assassination of Navalny. The US sanctions focused on the head of Russia’s FSB intelligence service and other Russian officials. But it was not clear how much actual bite they would have. Last week, the Biden administration announced wider economic sanctions in response to attempted Russian interference in the 2020 US election and to the SolarWinds hack.

That latest round of sanctions did not refer to Navalny, and when Biden spoke to Putin on April 13, the read-out of the phone call issued by the White House contained no mention of Navalny. It stated that Biden had told the Russian leader that he was willing to work with Putin on areas of common interest but had challenged him on Ukraine and had said the United States would “act firmly in defense of its national interests in response to Russia’s actions, such as cyber intrusions and election interference.” On that call, Biden also suggested the two hold a summit.

The absence of any direct statement from Biden regarding Navalny worried some of Navalny’s supporters. But on Sunday national security adviser Jake Sullivan told CNN, “We have communicated [to Russia] that there will be consequences if Mr. Navalny dies.”

Is that threat enough to help save Navalny?

In mid-January, days before Navalny returned to Moscow from Germany, where he had received medical treatment for the poisoning, he and his colleagues privately drew up a list of Russian oligarchs who should “should be sanctioned if the West wanted to get serious about encouraging Russia to cease attacking human rights and to rein in corruption,” as Vladimir Ashurkov, the executive director of Navalny’s Anti-Corruption Foundation, put it. When Navalny was arrested, Ashurkov posted this roster of eight oligarchs, suggesting these were targets who should be pressured to save Navalny.

On Wednesday, the Free Russia Foundation, a Washington, DC-based nonprofit, circulated a list to congressional offices of four of these oligarchs and urged that sanctions be placed on them immediately in an effort to prevent the death of Navalny. The four they highlighted included some of Putin’s most well-known billionaire allies: Roman Abramovich, Igor Shuvalov, Nikolay Tokarev, and Alisher Usmanov. Abramovich is the prominent owner of the Chelsea football club in England. He has socialized with Jared Kushner and Ivanka Trump. Shuvalov runs a Kremlin-linked bank. Tokarev is a former KGB colleague of Putin who now heads a company that transports 90 percent of the extracted oil in Russia. Usmanov is a metals and technology tycoon who at one point was one of the biggest investors in Facebook.

“The Biden administration must urgently hit at the heart of the Putin regime by sanctioning his top financial enablers because Aleksei Navalny’s life is in imminent danger,” says Natalia Arno, the president of the Free Russia Foundation. “Putin’s desire to keep him as his hostage should not be tolerated in the world today, and only such powerful sanctions can strike at the pillar of the Putin regime and force him to free Navalny.”

So is it indeed time to go after Putin’s cronies? I asked Daniel Fried, a former career diplomat who once was the State Department’s coordinator for sanctions policy. He explains that for years there has been an ongoing discussion over whether sanctions against Russia should impact broad economic sectors or zero in on specific individuals. Often it’s been a combination. “Last week’s sanctions on Russia,” he says, “did include some individuals but did not go after Putin’s circle. Some said that was too weak. I thought the Biden administration is holding that in reserve.”

“If Putin’s regime effectively kills Navalny,” Fried says, “I’d recommend the United States—and hopefully our European allies—would move in the direction of sanctions on individuals in Putin’s circles. And if there is an invasion of Ukraine, I’d propose more broader and sectoral sanctions. It is always complicated in thinking through the options on how to responds to bad Russian actions when there are so many of them. Going after individuals is right when Putin is going after an individual.”

Fried believes Biden’s most recent sanctions “were credible and put Putin on notice that there is more we can do and we are prepared to do it.” Though he suspects some officials in the Biden administration may be more concerned with Russia’s external behavior—say, its threatening actions regarding Ukraine—than internal deeds, such as the assault on Navalny, he points out these are hard distinctions to maintain. Authoritarianism in foreign policy and authoritarianism in domestic policy usually overlap.

Fried assumes the Biden White House has privately conveyed a strong warning to Putin about Navalny. But, he adds, “they ought to be preparing contingencies for what we do if Navalny is effectively murdered by the Kremlin.”

The obvious question is whether a tough warning—which might include the threat of sanctions against Putin’s cronies—would work. Targeting the oligarchs if Navalny perishes might be an appropriate punishment, but at that point it won’t help him or his movement.